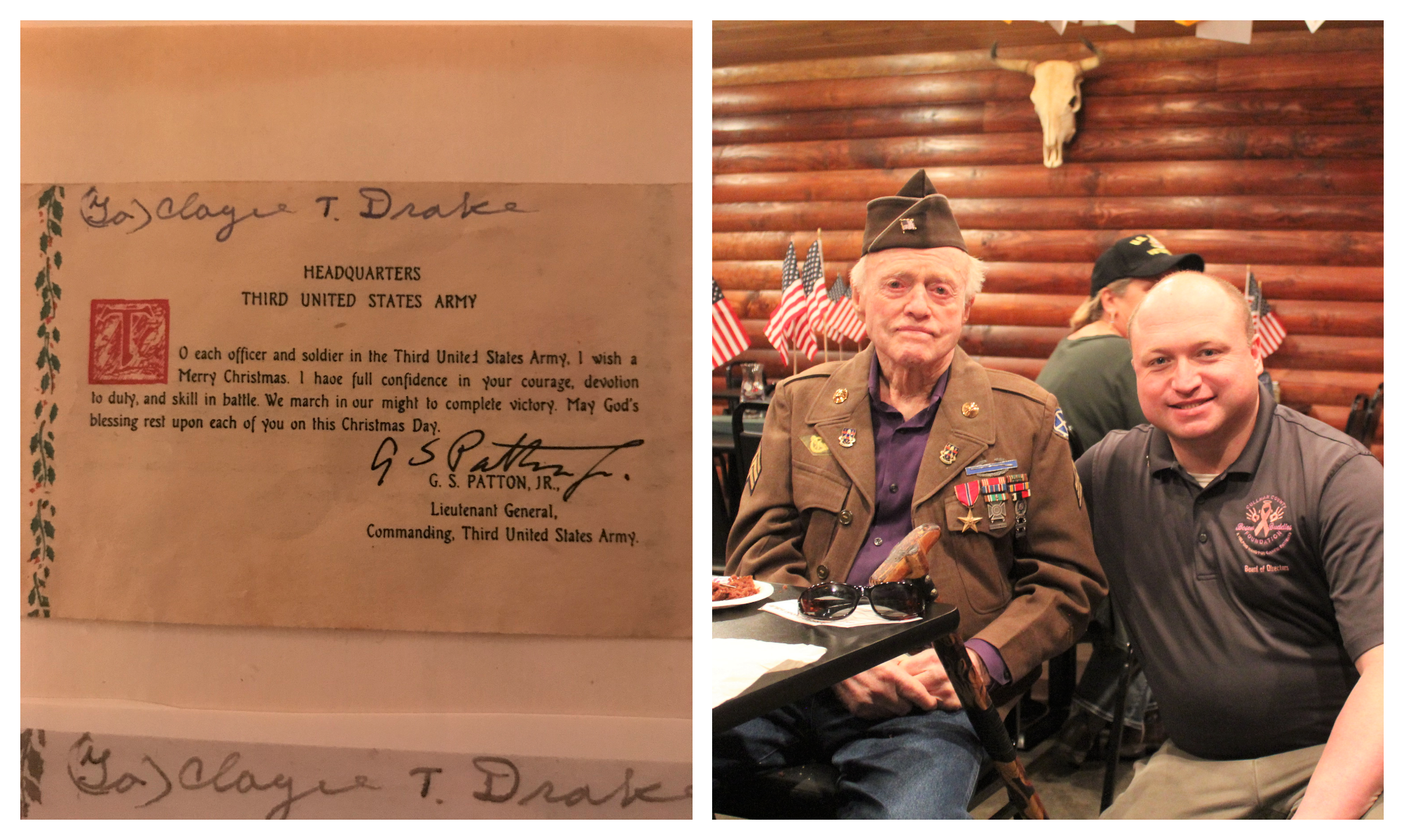 Find parts one and two at www.cullmantribune.com/keyword/cloyce-talmadge-drake

On Dec. 18, 1944, the day after Cloyce Talmadge Drake’s 21st birthday, he and his fellow soldiers followed an old washed out road. It was approaching dark as they headed into a city in France. This was just days before they would be at Bastogne.

“The staff sergeant above me had me go back up the road that I’d never been to the company headquarters. It was about 4-5 miles up the road. I picked a guy to go with me and we led the first sergeant and everyone back down to this town. Planes were hitting this town and it had been set on fire,” Drake said.

Drake was in awe of how the planes could maneuver and aim the guns.

He continued, “The town was on fire and it was getting night. An old lady was there with all this happening and she was after a rooster. She was trying to catch that rooster for it wouldn’t get killed!” Drake laughed as he told the story, “She was running that rooster all over that town. Big ol’ rooster!! I will never forget that.

“We went to the edge of this town and stayed in a nice brick home with a machine gun in the window. I had a boy who liked to shoot that machine gun. Those Germans were running over this town to the mountain to get away. We had that .30 caliber machine gun and this boy shot at Germans all day. They were about half-mile away. They’d lay down like he’d killed them. Then, a little while later, they would get up and keep trying up that mountain.”

As Drake and the 35th Infantry made their way through France, they often captured  German soldiers. One time he remembers capturing 50-100 Germans hiding in one house. The German soldiers would fly white flags outside to indicate their surrender.

Drake explained, “Hitler told them German soldiers all kind of big stories that wasn’t so. I remember talking to a German soldier that we captured who could speak English. They had told them that Germany had captured a whole bunch of stuff in New York. When we captured them, they’d tell us what Hitler had told them or had his officers tell them. Hitler’s SS officers were all fighting for Hitler and SS (The Schutzstaffel) troops would fight to the death. The SS troops has been indoctrinated. The other German troops, they were afraid not to fight.”

Drake recalled one German soldier they had captured in France.

“He had a black loaf of bread. We carried him to the kitchen and he gathered our bread in his hands. He held his hands up and yelled ‘white bread!’ He loved having that white bread. The Germans had butter and bread and I remember we had dark chocolate. Lots of the guys didn’t like it because it was bitter, but I had pockets full of it. Walking from place to place, I’d gnaw on those chocolate bars.”

“We were down in southern France, on the front line down there. We were on this mountain on a peak. In front of us was a big valley and we had our guns set up on that. On Christmas Eve though, the ground was froze, and they come up there and pulled us. Left nothing out there to defend the Germans from coming. They withdrawed our whole division and we went to some town for Christmas dinner. Next day, we rode all day on trucks. We had freezing weather and our feet sitting on that steel floor. You talk about getting cold!! No heat in that truck. Just a tarp over it.

“Anyway, we rode all the way back up to where some troops were penned off from the Americans. We went up there and fought and released them. We fired at people and shot and killed Germans.

“We met the paratroopers . They had dropped down out there and couldn’t get any food up to them. We met them and took their place. This was at Mortain.”

General Patton and the Battle of the Bulge

One of Drake’s most valued possessions is a prayer card signed and given to him by Gen. George S. Patton. The cards were given to those on the front lines after Patton prayed for the weather to clear during the Battle of the Bulge.

Drake recalled, “I was in Bastogne. We were completely surrounded. It was cold, and the snow was deep. I guess we stayed in that place for about a month it seems. Gen. Patton had come up there and issued a prayer card for every one of us. It was rainy, cloudy, foggy-you couldn’t see nowhere hardly. He brought those cards down and asked everyone to pray. I don’t know who all prayed. I prayed myself and the next morning, it was clear. All the fog was gone, and the airplanes came down.

“There were three or four of them. Right above us was the town in the valley. The planes bombed the town all day. We got out of our foxholes just waving at them.”

After the Battle of Bulge, Company I left Belgium and went into Holland as it made its way toward Berlin. In less than a year, Drake had been from Omaha Beach to Holland.

He recalled, “By now, I could tell where they would be shelling us with artillery tanks shooting them 88s so fast you would hit before you could hear the sound. I’d been there so long, I’d know where to get. I could find a pretty safe place.

“I remember one place there in Holland, I had three or four replacements come and put in my squad. I found a house that had been bombed but still had good dry rooms in it and some beds. I got in one of them beds and them guys who came to replace that day, you know where they slept?? Under the bed!! Three or four guys from Tennessee.

“You know, that war, I’ve had soldiers that fought like I did say that they have dreams at night. They have nightmares. I never did have it, but I know there wasn’t nobody that went to more war than I went to.”

To be continued…. (Berlin and coming home)