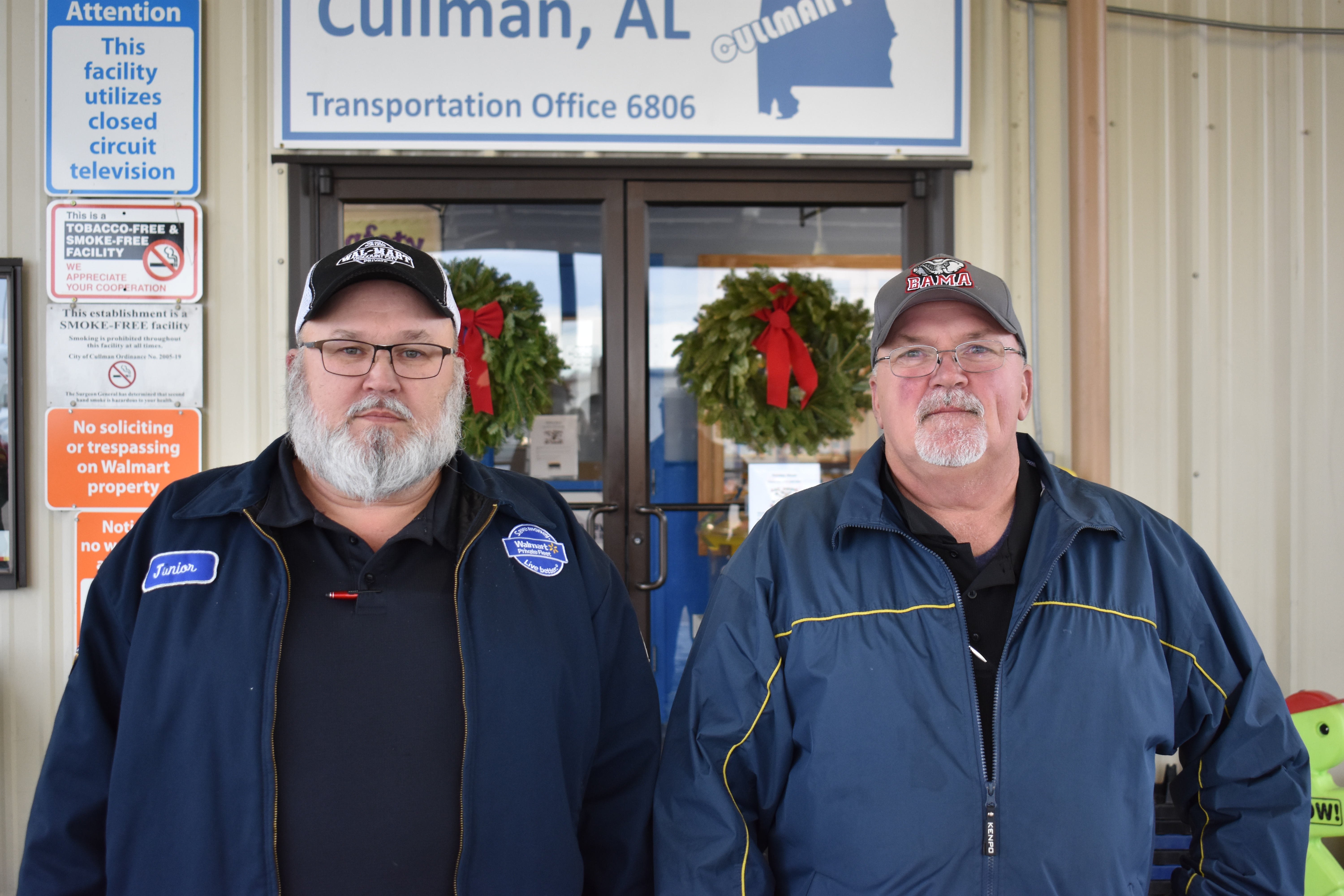 Both military veterans, Wal-Mart drivers Homer “Junior” Twilley and brother Allen Twilley wait to start their leg of the wreaths’ journey to the National Cemetery in Houston. (W.C. Mann for The Cullman Tribune)

CULLMAN – On Wednesday afternoon, a pair of Wal-Mart Transportation rigs arrived at the company’s Cullman distribution center, carrying a special seasonal cargo of 9,000 wreaths that will be placed on graves at the National Cemetery in Houston, Texas.  The wreaths are part of a collection of hundreds of thousands that will be placed on graves in all national cemeteries, along with U.S. military cemeteries overseas, during the Christmas season in a program known as Wreaths Across America (WAA).

The pair of trucks was accompanied from Chattanooga by members of the Patriot Guard Riders motorcycle club.  They were escorted into Cullman County by officers from the Cullman County Sheriff’s Office, and, once in the city limits, units of the Cullman Police Department joined the escort, along with the department’s helicopter.

Cullman Wal-Mart Transportation Operations Manager Carolyn Cecil told The Tribune, “We are honored to be able to participate each year in the Wreaths Across America event.  Wal-Mart is a major sponsor in sponsoring wreaths to be placed on all the veterans’ graves at our national cemeteries. And it’s something that is just very touching.  We have a lot of veterans here that have served in our armed forces, whether Army, Navy, Air Force, Marines, Coast Guard, and we want to participate in this every single year, and we select some of our veterans to be our drivers of the trailers from Cullman.”

Brothers Allen Twilley (a 12-year Army veteran) and Homer “Junior” Twilley (a 21-year Navy veteran) were chosen to drive the leg of the wreaths’ journey from Cullman to Brook Haven, Mississippi.  Allen Twilley is former Airborne and Air Assault, with combat experience in Iraq and a Bronze Star Medal. Junior Twilley is a four-time recipient of the Navy’s 7th Fleet Aviation Ordinance Man of the Year Award.

WAA’s website states, “Each December on National Wreaths Across America Day, our mission to Remember, Honor and Teach is carried out by coordinating wreath-laying ceremonies at Arlington National Cemetery, as well as at more than 1,400 additional locations in all 50 U.S. states, at sea and abroad.”  This year’s WAA Day ceremonies will take place on Saturday, Dec. 15.

“While we have Veterans Day in the fall and Memorial Day in the spring, our servicemen and women sacrifice their time and safety every single day of the year, to preserve our freedoms.  And in many homes across the U.S., every day there is an empty seat for one who is serving, or one who made the ultimate sacrifice for our country. That is why our mission to Remember, Honor and Teach lasts all year long, far beyond the single day in December when we coordinate wreath-laying ceremonies.  All throughout the year, Wreaths Across America works in a number of ways to show our veterans and their families that we will not forget—we will never forget.”

Multiple transportation companies across the country take part in the program, delivering wreaths to sites all over the nation, including Alabama’s own National Cemetery in Montevallo.