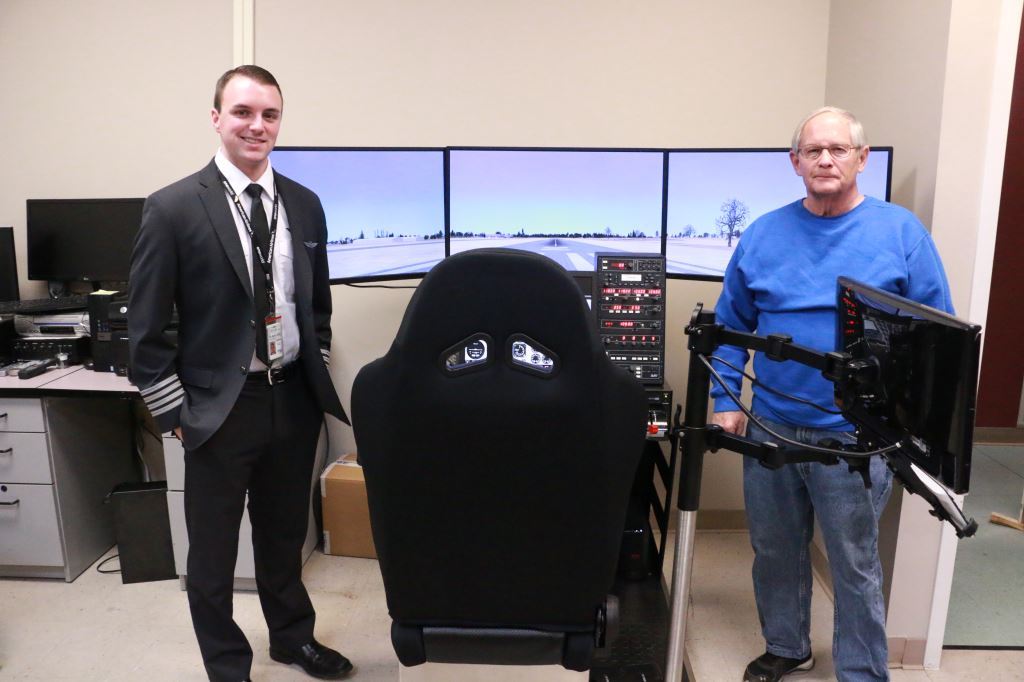 HANCEVILLE –  Aaron Mathis once navigated through Wallace State’s Flight Technology/Aviation program and ultimately wanted to serve as a strong ambassador for the college.

He’s definitely fulfilling that promise to himself.

“This is definitely like a homecoming for me. We had a cancellation with another event, and PSA allowed me to present to the Wallace State group,” Mathis said. “I remember walking through these doors and saying I couldn’t wait to give back one day. This is just one of the ways to do it. I know the students have a lot of questions. They have the same questions I had, so this is a great way to share all of the information I’ve learned down the road.”

Mathis, 23, was a Wallace State student from August 2013-May 2015, shining in the Flight Technology/Aviation program and graduating with his multi-engine commercial license. After his two years at Wallace State, Mathis attended flight instructor training classes in Florida while living in Foley and earned the proper credentials to become a flight instructor. He also earned a bachelor’s degree in management technology from Athens State.

Mathis accepted a pilot/first officer position with PSA Airlines in July 2016 and is now a junior captain within the company. As a pilot for PSA, Mathis has the privilege of flying through historic and majestic U.S. cities on a weekly basis.

Mathis has a home in Pell City, but also lives in Charlotte, North Carolina, as his home base for PSA Airlines.

After his presentation, Mathis answered questions from program students and others in attendance, including from program head Bert Mackentepe.

“I’m very proud of all Aaron has accomplished in a short time. It shows the sky’s the limit for someone who is focused and knows where they want to go,” Mackentepe said. “Aaron is another credible resource for our students. They’re prone to listen to someone like Aaron, who was in their shoes just a few years ago.”

Recent graduates and students of Wallace State’s Aviation/Flight Technology program are also working as pilots for Jet-Pep, the Jefferson County Sheriff’s Department, and med-flights for UAB and Children’s Hospital, among for other businesses and companies.

“This is the best time I’ve ever seen for aviation careers. I’ve been flying since 1965, and when I started you couldn’t buy your way into an airline cockpit. Now, companies are actively recruiting pilots and trying to get aviation programs started worldwide,” Mackentepe said.

Wallace State offers associate degrees in Aviation/Flight Technology and special training in helicopter/airplane pilot training. Pilots trained at Wallace State learn how to fly either airplanes and/or helicopters and are able to perform a wide variety of tasks, whether as a professional or recreational pilot.

The Aviation Flight Technology program consists of flight and ground instruction, which will qualify students for various careers in the aviation industry.  Once trained at Wallace State, pilots are required to attend recurrent training and simulator checks once or twice a year throughout their career.

For more information about the Wallace State Aviation/Flight Technology program, one can contact the airport at 256-737-3040, visit www.wallacestate.edu/programs/technical-division/aviationflight-technology or check out this program video: www.youtube.com/watch?v=OJk3g8ssaSA.