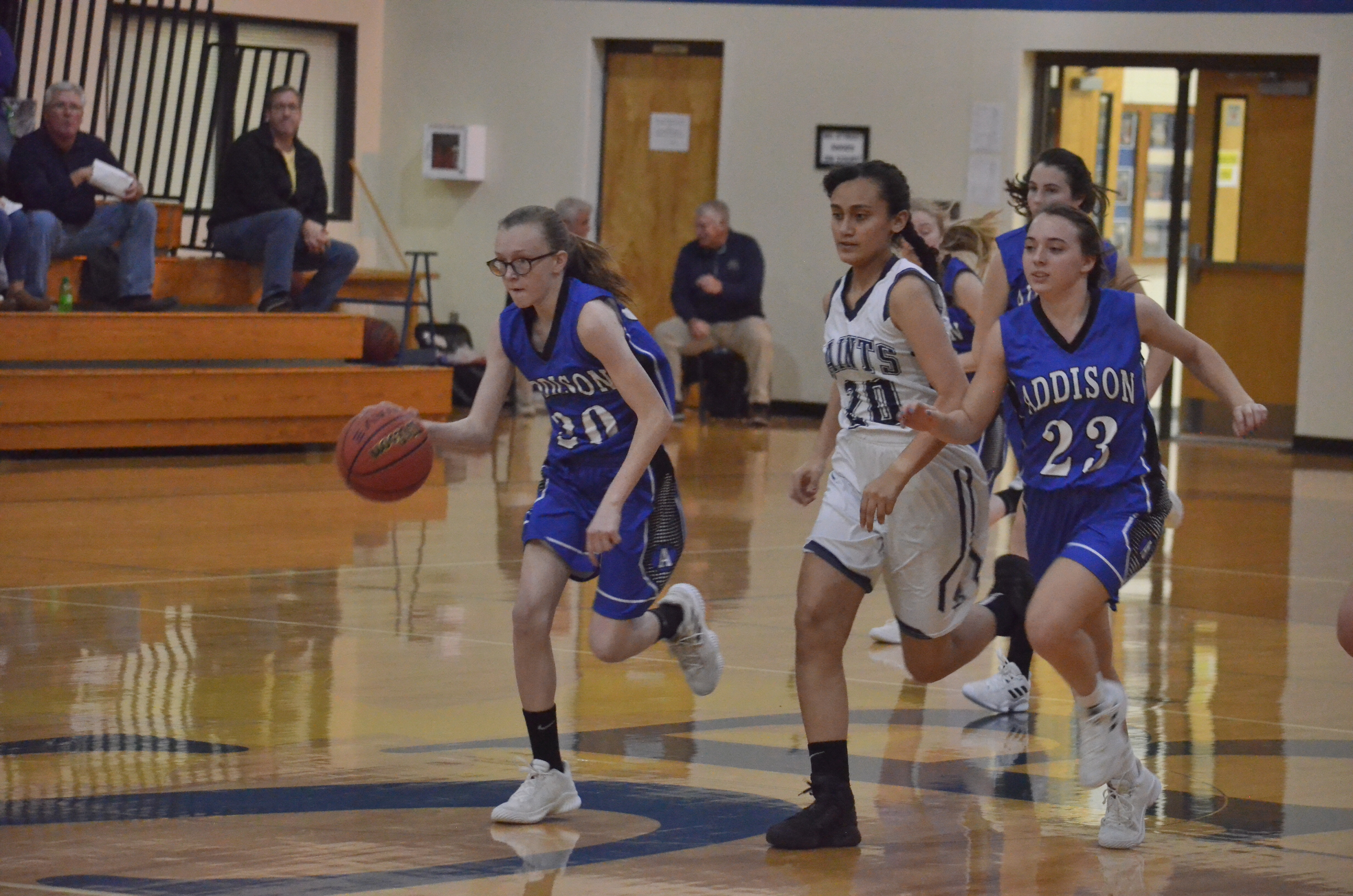 Addison's Karleigh Shipley brings the ball up the floor in the Lady Bulldogs' road win over St. Bernard Monday night. (Nick Griffin for the Cullman Tribune)

CULLMAN – Addison traveled to St. Bernard Monday night for a pair of varsity matchups, and the Bulldogs went home with a pair of wins. The Lady Bulldogs handled the Lady Saints 47-21 and in the boys' game, Addison held on to defeat St. Bernard 44-41.

Both teams got off to a rough start in this contest, but the Lady Bulldogs quickly made that a distant memory as Kaylee Brummett scored the first seven points for her team and Addison scored the first 13 points of the game before the Lady Saints got on the scoreboard on a Claire Sanders trey. Brummett later answered with her third three-pointer of the quarter as the Lady Bulldogs rolled to an early 16-3 lead after one and they wouldn't look back as they pulled away to win it 47-21 and improve to 5-2 overall. The Lady Bulldogs are now on a four-game winning streak.

Destiny Walker led the way for Addison with 11 points and a steal, while Brummett added 10 points, four rebounds and three steals. They were two of nine Lady Bulldogs to find the scoring column in the win. Anna Luker added four steals for Addison, while Amylia Cleghorn finished with three steals. Macey Butler added a pair of steals of her own.

St. Bernard (1-9) was led by Sanders, who finished the game with 10 points, three rebounds and a steal. Emma Tafazoli finished with four points, 10 rebounds and three steals. Macy Whaley added four points and seven rebounds, while Helen Kim ended up with nine rebounds.

The first quarter was pretty low-scoring, but St. Bernard, behind seven points by Carson Holmes and four points by Caleb Guthery, ended up taking a 13-10 lead into the second period.

Both teams traded runs in the next two quarters. First, it was the Saints as they held the Bulldogs to just two baskets and a free throw while they put up 14 in the period to take a 27-15 lead at the half.

Addison quickly had an answer to start out the second half as the Bulldogs scored the first 11 points of the quarter, including an and-one by Logan Wilkins, to cut the deficit to just one at 27-26. After Gavin Whaley made it 29-26 on a pair of free throws, Zayne Guthrie tied it up on a trey and each team traded a free throw to keep the game tied at 30. The Saints finished the quarter strong as Peter Duan hit a jumper, and Holmes got a steal and a basket to take a 34-30 lead into the final period.

Addison cut the deficit to just one multiple times in the fourth period, but after a pair of Wilkins free throws made it 37-36, Guthery nailed a trey from the right wing to stretch the lead to 40-36. A few seconds later, Gage Gilliland nailed one of his own, and with 3:01 remaining in the game, Wilkins nailed two more from the line to give Addison its first lead since early in the opening quarter, 41-40.

Each team hit a shot at the free-throw line to keep it a one-point game, but a Kendrick Smith floater from the right side went in and Addison now had a 44-41 lead. The Bulldogs looked to ice the game late, but Gilliland and Caleb Crider each missed a pair from the charity stripe, giving the Saints a shot to send it into overtime. A heave from John Christian Rose fell short, and the Bulldogs picked up their first win of the season to improve to 1-3 overall.

Wilkins had a huge game as he finished with 17 points, eight rebounds and three steals for Addison. Guthrie added seven points and three rebounds. Jesse Brock and Gilliland each ended up with five points. The Bulldogs will travel back home to take on Winston County on Tuesday night.

Holmes led the way for St. Bernard (5-5) with 15 points, six rebounds and a steal. Guthery added nine points, three rebounds and four steals. The Saints will take a road trip to Meek on Tuesday night.