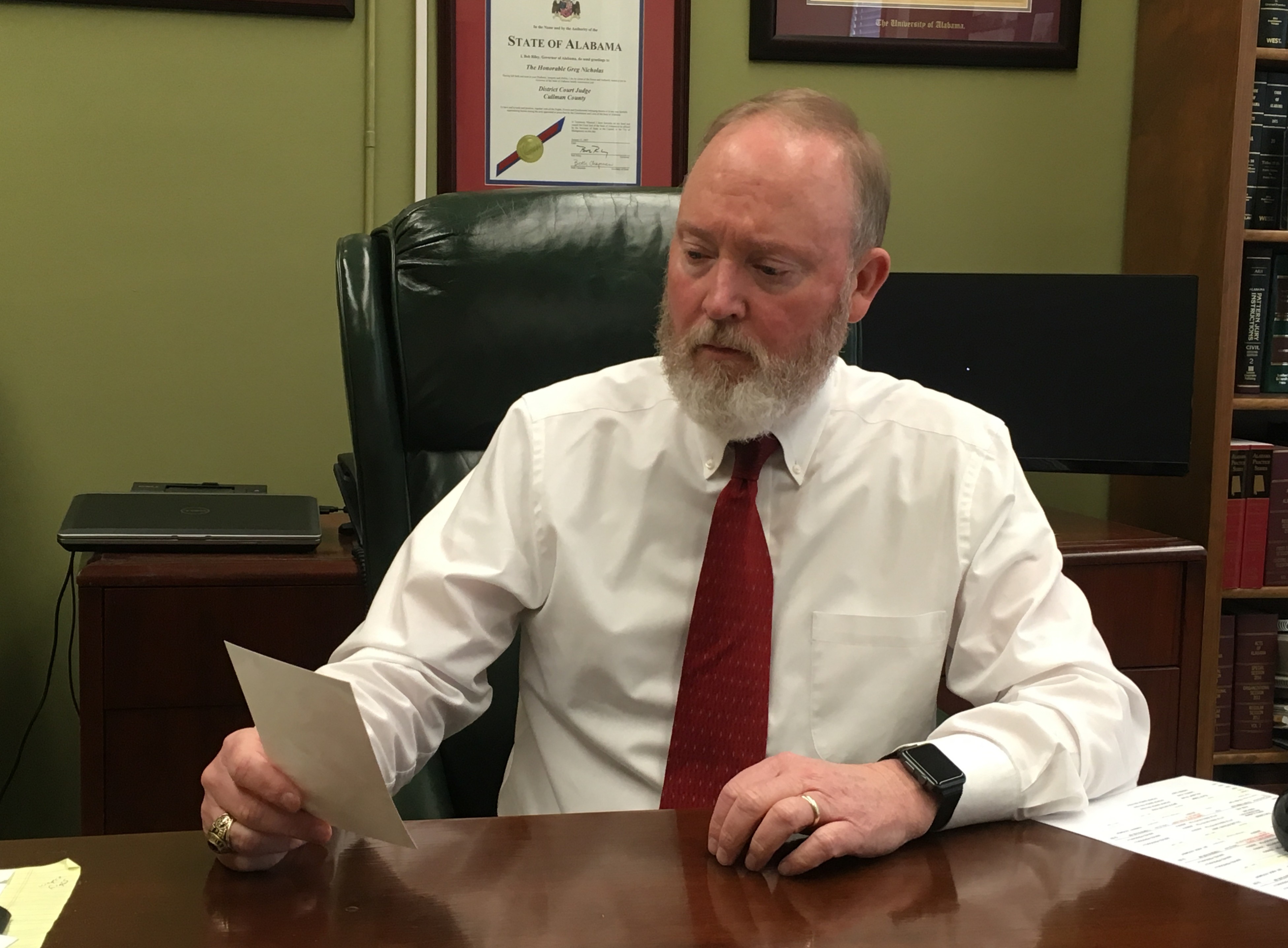 Circuit Judge Gregory Nicholas keeps a photo of a critically ill baby of a drug user, a woman who was before him in court, to remind him of the dangers of drugs and the importance of reaching kids before they make dangerous decisions. (W.C. Mann for The Cullman Tribune)

CULLMAN – During a conversation in his office about decisions young people make, Cullman County Circuit Judge Gregory Nicholas reached into his desk drawer and pulled out a photograph, studying it for a few moments before returning it.  It was a picture of a critically ill newborn baby in a neonatal intensive care unit, born to a young drug-addicted mother. The image is disturbing, not the kind of thing you’d want to keep around to see time and time again, but it provides the judge a powerful reminder of what can be prevented if someone can reach young people before they make bad decisions that can change their lives in all the wrong ways.  And he’s trying to be that someone.

Several years ago, Nicholas and District Judge Wells “Rusty” Turner began visiting area high schools, co-hosting a program called “Making Wise Choices” geared toward helping students understand how decisions they make today can shape the rest of their lives.  During the year, they visit each high school in the county, presenting to a thousand or more students annually.

On Wednesday, after returning from a presentation at West Point High School, Nicholas sat down with The Tribune to talk about the program.

“Judge Turner and I started that about four or five years ago.  We were just kind of a little frustrated with seeing all of these young people come to the court, typically in their late teens or early 20s, with criminal charges.  And they’re not necessarily bad people, but they’ve made very poor choices. And everybody makes mistakes, of course, when you’re growing up. That’s just part of being human.  But, quite often, those mistakes that they’re making at 19, 20, 21 years of age are life-changing mistakes,” he said. “So we’re just talking to the high school students about some of those common mistakes that we see young people make, that are mistakes that are difficult to recover from, because typically it creates some criminal justice issues, which means that they may have criminal records.  It may mean that they go to the state penitentiary to serve a little time.”

He continued, “And even if they don’t go to the state penitentiary, if you get convicted and you have a felony on your record, that makes life very difficult going forward, because it impacts your ability to gain employment.  That’s one of the typical questions on a job application: ‘Have you ever been convicted of a felony?’ When you mark ‘yes, I have,’ then quite often that application is not going to be looked upon favorably by your prospective employer.”

Turner said, “I think probably the biggest goal that I can think of, the reason we do it, is to let kids stop and think before they make some of their choices, because their choices can have such life-altering impacts.  And if they can see what some of the consequences are for some of those actions and some of those decisions, it can give them a little pause and make them think, ‘Let me think about this for just a second,’ and hopefully create a little impulse control in a teenage brain that’s hard to do sometimes.”

What are the situations that commonly bring young people into your courtroom?

Said Nicholas, “Making impulsive choices, typically.  But the number one reason, and I tell the young people this, and I ask them, and most of the time somebody raises their hand and gets it, about 85 or 90 percent of the court cases that we see are involved either directly or indirectly with some sort of drug usage.

“And what I like to do when I speak to the students is I tell them stories, I change the names, typically, because some of the people we deal with are going to be friends or related to some of the students that we see, but I’ll tell them those stories, and I think that makes it a little bit easier for them to understand it.  I can get up and tell them what is legal and what’s illegal, but when you tell a story, I think that just makes it a little bit more real to the students. So I typically do that.”

The judges confront the myths of immortality and invincibility that young people often buy into, letting them know, “Yes, it can happen to me.”  Beyond drug-related crimes and life conditions, they venture into both the ethical and legal implications of many common present-day youth issues, including:

Turner said, “One of my kind of pat sayings is that somebody can take away your money, they can take away your health, but they can’t take your education away from you.  And that’s something you earn, and you carry that with you the rest of your life, and to not forego that opportunity that they have here through the Cullman school systems. You know, we have a great school system, both city and county.  And it’d be a shame to lose and waste that when, especially all over the world, there’s people that would love to have this opportunity.”

Continued Turner, “And so I stress, whether they want to go to college or not, it’s going to take more than just a high school education for them to be successful and have a chance at a good job in today’s world.  And whether that be a four-year degree, or whether it be a two-year technical degree, it’s going to take a little more than just a high school education. And this foundation that they lay in high school, though, sets them up for success later on.”

Turner commended the administrations of both the county and city school systems, along with each high school’s principal, for their openness to the judges’ program.  He noted that presentations have always produced good feedback and invitations to return.

Nicholas shared about the disturbing picture in his desk drawer:

“I typically tell (students) about the picture I keep in my desk here at the courthouse of a newborn baby that’s just a few hours old, and you can see the tubes that are attached to that baby’s body, and you can see the intestines on the outside of the baby’s stomach.  And I tell them I keep it there because that reminds me just how powerful drug usage is. This child’s mother was in my courtroom on a chemical endangerment charge, and she was 19 or 20 years of age at the time. And this child was born, the doctors say, with five different types of drugs in her body.  In fact, she was born addicted to drugs, so that her little body was just shaking because she was coming off of the drug addiction. She was having withdrawal symptoms. The doctors did a great job of repairing the physical problems that you can see, but there may be some developmental problems as that child grows up, that we may not know about for years and years.

“Anyway, I tell the students the story about this little girl’s mother, and about how she started out just using a little marijuana, she said, when she was, I think she was 13 or 14.  And then pretty soon, that wasn’t doing the trick for her, so she started using pills she was getting, I think, out of her grandparents’ cabinet when she would go over there. And then, by the time she was 16 or 17, she was using meth.

“And I explain to them, kind of, that pharmacology about how drugs work, and about the dopamine and the chemicals and go into some detail about that just so they’ll kind of understand that, and how you’re always kind of chasing your next high because you build up a tolerance for the drugs.  And the drugs you were using that made you feel so good, don’t make you feel so good if you use the same amount or the same kind.

“So I talk about that, and the point I make with that is that a mother’s love should be the most powerful thing on the planet, but, unfortunately it isn’t, because the mother of this child, who was in my courtroom pleading guilty to that chemical endangerment charge appeared to be truly remorseful.  She was crying at the bench, talking about how much she loved her baby. But drugs are so powerful that love wasn’t enough.”

Shared Turner, “Greg and I both do appreciate the school system being so willing to allow us to monopolize some time at each school, to just share a couple of hours with them and share this message, because–it’s a tired saying, but it is true–if we can make a difference in one young person’s life, it’s worth doing, because I get tired of seeing kids make stupid mistakes when they should know better or think a little bit.  And luckily, most of the time, the decisions they make are not something that we can’t handle, and we can hopefully rectify. But sometimes, they’re not. They do make a fateful decision that can have just life-altering impacts on them. We’re trying to avoid those, as much as possible.”

The judge concluded, “I have a whole lot of enthusiasm and a positive feeling for the future of Cullman because we do have bright kids, and a lot of them just need an opportunity and a little direction.  And, hopefully, we’re trying to give that to them.”

If you know someone who needs help

Teachers and school counselors are increasingly receiving training in how to deal with a range of problems students may face, as well as knowledge of available resources for help beyond their own skills.  If you are a student who needs help, whether you’ve made a bad choice and need to fix it before things get worse, or you’re the victim of someone else’s bad choice, find an adult you trust and talk to them.

For students or parents of students who may be suffering from depression or other mental health issues, or who may be drug-dependent, good starting points for help include: