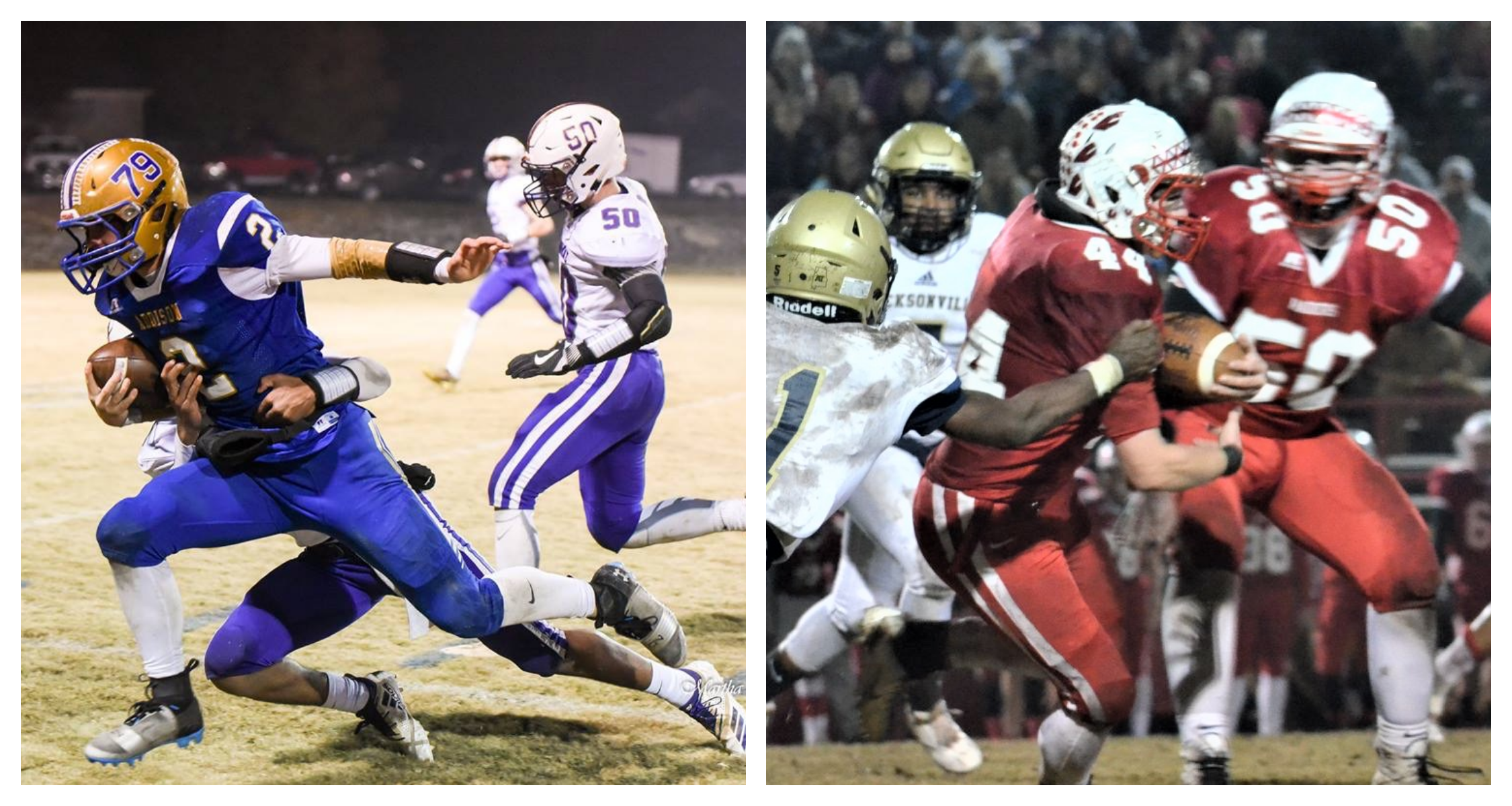 Addison will host Aliceville and Good Hope will travel to Oneonta Friday night in the AHSAA State Playoff quarterfinals. (Martha Needham and Nick Griffin for The Cullman Tribune)

CULLMAN – Thanksgiving is an important day for a lot of people in the community, but in Addison and Good Hope, Friday is the most anticipated day of this week. The Bulldogs and Raiders will be back on the field for a pair of AHSAA State Football Playoff quarterfinal matchups and once you’ve made it this far, every team you face has the potential to win it all. Addison will host Aliceville while Good Hope hits the road to face off against Oneonta.

The Yellow Jackets have played dominant defense all season, so Addison will have its hands full on the offensive side of the ball Friday. Aliceville has pitched three shutouts this season and has held its opponents to single digits in nine of its 12 games. Because of the strength of its defense, the Yellow Jackets’ offense hasn’t had a ton of pressure to deal with this season. If the Bulldogs can find a way to put some points on the board Friday, they can put the Aliceville offense in an uncomfortable and unfamiliar situation.

That being said, the Yellow Jackets are averaging 30 points per game this season and present plenty of challenges for the Addison defense as well. Aliceville has a lot of speed on that side of the ball and can generate explosive plays if you don’t play sound defensively.

The Bulldogs have won five straight and are averaging 44 points per game in that stretch. Some of those points have been coming on defense and special teams as well, so a scoring play in those phases of the game could be a big difference maker for Addison. With a stout defense coming to town to take on a high-powered Bulldogs’ offense, something has to give and only one team can advance to the semifinals.

After an impressive, emotional win over then-undefeated Jacksonville in front of the home crowd last week, the Raiders will have to get back up for another tough opponent, this time on the road.

Like the Raiders, Oneonta has been able to put points on the board this fall. The Redskins are averaging 30 points per game offensively and have scored a combined 99 points in their two postseason victories over Brooks and D.A.R. A big part of that production comes from standout wide receiver Jaden Kent who is currently committed to play for the Troy Trojans at the next level.

Good Hope hasn’t had much trouble finding the end zone this season either. The Raiders are scoring 36 points per game thanks to a potent running game, so the defensive side of the ball is where you can start to find separation between these two teams.

Good Hope is giving up just 15 points per game this season and is coming off one of its best performances on that side of the ball in the 27-12 win over Jacksonville. The front seven in particular have been lights out for the Raiders, but they’ll have to continue playing at a high level to contain the Redskins’ offense.

Good Hope Head Coach Alan Scott and his team have had a few days to look at Oneonta on tape and the coach said he can’t narrow the Redskins’ success down to one or two things. He sees a well-rounded team.

“I just think they’re a really good football team from top to bottom,” Scott said. “This game is pretty simple; it’s about blocking and tackling, and their guys up front on both sides of the ball are very good. Their linebackers play well, their secondary is good and their quarterback is as good as we’ve seen all year. He can make plays with his legs, he can chunk it and they’ve got the biggest receivers we’ve seen. I think both of them are 6’4” and one of them has already signed with Troy so they’re a very solid ball team.”

On both sides of the ball, the Raiders have been controlling the line of scrimmage this season. In their first two postseason matchups they have played some of their best ball up front and Scott knows that’s been a big key to the team’s success.

“Last week obviously with Jacksonville being undefeated, we were tickled to jump out to that early lead,” Scott said. “I think we did a great job early in the game mixing it up and keeping them off-balance offensively, and then defensively we had them going three-and-out just about every time and swarmed to the football and made plays, so I’ve been very proud of the way our kids are playing right now.”

Good Hope has had an off-the-field challenge to deal with this week as well: the Thanksgiving holiday. There are a lot of teams across the state that wish they had to worry about practicing this week, but Scott admits that it throws off the routine a little bit.

“It’s just different. We’ve been out of school here in Cullman County all week and it just makes your routine a little bit off,” Scott said. “We’ve tried to practice at 3 the first two days and then today we got up there early and watched some film. The community of Good Hope does a Thanksgiving meal, so we help serve and then have practice right after that. Then on Thursday we’ll practice at 8 a.m. and get up there Friday a little early to hang out together and get ready for the game so it’s just a little different.”

After a huge win like the one the Raiders experienced at home last week, some teams can struggle to settle back down and refocus, but Scott isn’t worried about that with his senior-laden team.

“They’ve done a good job of that all year like even after the Fayette County game where over the weekend everybody is kind of patting you on the back and telling you what a good job you did, and that is well-earned, don’t get me wrong. It’s a good experience, but you just have to know that on Monday when you get back there’s another task at hand,” Scott said. “It becomes a one-game season so that helps you get things back into focus pretty quickly.”

Good Hope was won six straight and looked better each week since falling at Northside in October and has no intention of slowing down now.