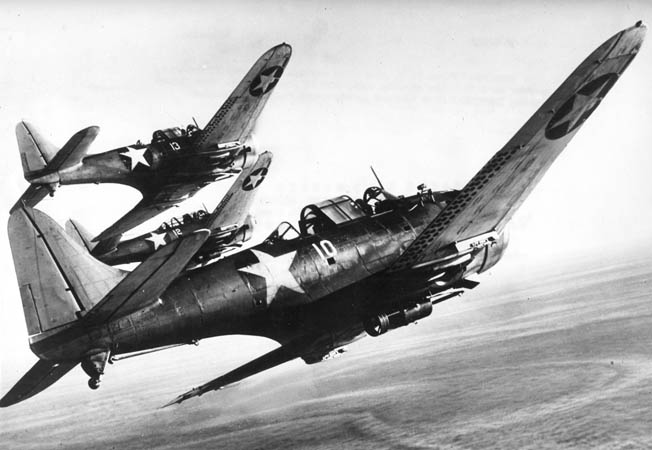 A World War II- era Douglas SBD Dauntless Dive Bomber will be one of the main attractions at this Saturday’s Cullman County Veterans Day Celebration. In this photo, three SBDs bank toward their target during a mission in the Pacific in 1943. (Photo credit: Warfare History Network / Martin K.A. Morgan)

CULLMAN – Cullman Regional Airport will be bustling with activity this Saturday, when thousands are expected to attend the annual Cullman Veterans Day Celebration. The event, which this year will have a special focus on The War on Terror,  will take place on Nov. 3 from 9 a.m. to 5 p.m.

The celebration will feature Wallace State reenactors, new and historic military aircraft and other military vehicles and weapons displays, a climbing wall, cornhole tournament and performances by the U.S. Army Silver Wings parachute team from Fort Benning, Georgia. Admission and parking will be free.

Patrick James, publicity chairman for this year’s celebration, is hoping for an even bigger event than in years past.

“We've had a pretty good attendance at this event over the past few years and we're hoping to attract an even larger crowd this year,” said James. “According to our Veterans Affairs representatives at the Cullman County Courthouse, we have over 7,000 veterans living in our county; we have a lot of local vets to honor and thank.”

“For our history buffs, and especially our Navy veterans, the Commemorative Air Force in Peachtree City, Georgia is going to be here and they're bringing a World War II Corsair (fighter plane),” said Cullman Mayor Woody Jacobs. “(The event will also feature) a Dauntless Dive Bomber from WWII; if you want a ride in that, they're going to be doing that. Also, the U.S. Army is going to have their Silver Wings parachute team, and that's always exciting to see those guys jumping.”

“We’re trying to get more young people involved this year,” said retired U.S. Air Force Col. Ken Brown, who is in charge of the event. “We went to the school superintendents, both city and county, and asked them to give the posters that we gave them to their history teachers, and asked them to give them maybe special credit to come out to the event. It’s kind of a living history thing. There’s just a lot of stuff for young people, students, to learn and see and enjoy out there. It’s a family event.”

While many different wars and conflicts will be represented, this year’s focus is on The War on Terror in Iraq and Afghanistan.

Said Brown, “We’re got the Army Guard unit from Cullman, which is an infantry unit, actual shooters. The unit’s been to both Iraq and Afghanistan. They’ll be out there with their families and marching in the opening parade. We’re trying to attract the younger veterans and their families. They can see the vehicles they drove or weapons that they used in The War on Terror. We’re going to have one of the Army’s newest combat helicopters, the Lakota, will be here from the Alabama Army National Guard.”

Rides will be offered on three different historical aircraft at the celebration: a Huey helicopter, a Dauntless Dive Bomber plane and a Cobra attack helicopter. Tickets are limited. The costs are $85 per person for the Huey (Vietnam-era; seats 10 per ride; kids may ride if 5 or older and accompanied by an adult) and $325 per person for the Cobra (Vietnam-era; seats one per ride). For the Dauntless, tickets are $995 (World War II-era U.S. Navy dive bomber; seats one per ride).

Ret. Major Robert Stephens, a Cobra pilot during the Vietnam War, spoke at an earlier media briefing about his experience with the historic helicopter.

“Just to give you a little perspective about a Cobra, my first tour I flew B models and we'd tour around in the sky at 80 knots and that's about all you could do,” said Stephens. “You couldn't get away from anything. My second tour over there, I was fortunate enough to fly the AH-1G (Cobra), by the way, this was the world’s first dedicated attack helicopter. To give you an idea of the advancement we had, think about a 1939 Ford (truck), a '39 ford could do 80 miles an hour basically and that's what we were doing basically in a B model helicopter. Along comes a Cobra, think of a Maserati or a Ferrari or something like this, that can do 200 miles an hour. That's the difference between the B model and the AH-1G. It gave us a tremendous advantage, and if you ever tried to get away from a bullet, you'll appreciate how fast you can go.”

Inside the airport terminal on Saturday, veterans can enjoy free doughnuts and coffee. There will also be a movie shown on the Battle of Midway with a WWII Dauntless Dive Bomber pilot reenactor (Navy Lt. Dick Best) on site. Guests can then move outside to see the aircraft. On the flight line, a movie about the Black Sheep Squadron will be shown and guests can view the Corsair aircraft. Reenactors will include 1940s wives of the Black Sheep pilots and U.S. Marine Corps Maj. Pappy Boyington.

Other reenactors will include Mrs. John Bolton, the wife of John Bolton, who was a Marine pilot in the Black Sheep Squadron, Private Quinn, of the U.S. Army's 77th Infantry Division, Rosie the Riveter, the star of a recruiting campaign for defense industries during WWII, Frances Langford, a singer who traveled with Bob Hope and the USO, and others in period dress.

The Wallace State Jazz Band will be performing a Glenn Miller 1940s swing concert and the Air National Guard Band of the South will also perform.

Cullman’s Guard unit will be displaying military vehicles at the event. There will be also be some from the City of Hanceville and Cullman Police Department.

“Charlie Company of the Guard will also have a War on Terror weapon display,” said Brown. “There will be a complete display of War on Terror infantry weapons. They’ll be out there with their vehicles on the flight line.”

There will be food vendors on site, and a hot lunch will be provided for veterans and their spouses.

“We want to encourage as many people as possible to come out as early as possible,” said Brown. “Congressman (Robert) Aderholt, Mayor (Woody) Jacobs and Chairman (Kenneth) Walker will be there to speak at the opening ceremony.”

The event will open at 9 a.m., with the parade at 9:40 a.m. and the opening ceremony at 10 a.m. Cullman County Sheriff’s deputies will be directing traffic flow and parking. Four Cullman Area Rural Transportation System (CARTS) buses will be transporting attendees from the parking area to the airport terminal. Seating for approximately 450 will be available for the parade and ceremony.

“There are 7,000 veterans in Cullman County,” said Brown. “The objective of this is to get people to come out for Veterans Day; it’s to honor veterans. This is to do something nice for the veterans.”

11:30 a.m. Patriotic music by the Air National Guard Band of the South