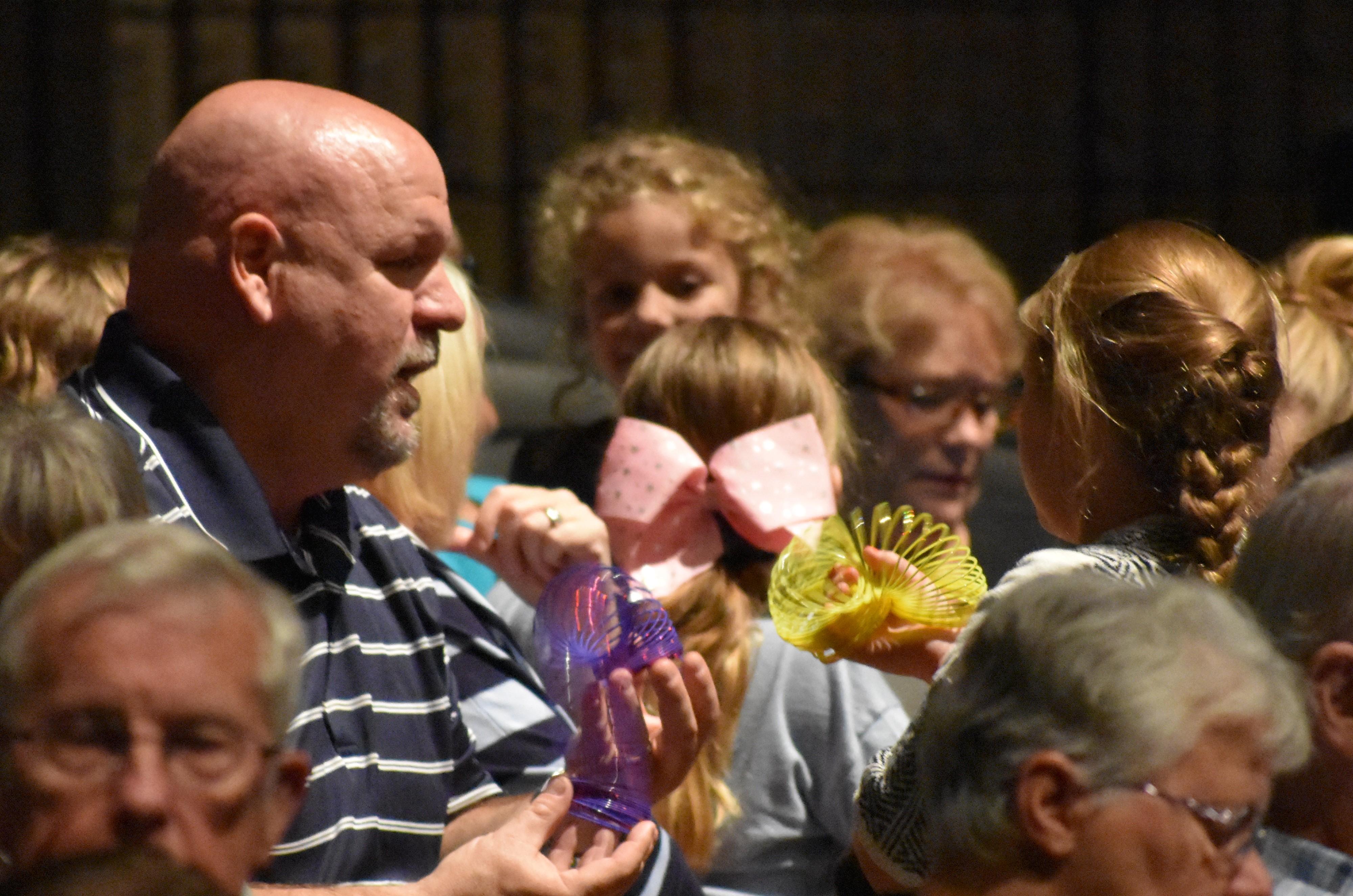 The sensory-friendly format allowed families more freedom. During the intermission, some folks even broke out the toys, including East Elementary Principal David Wiggins (in stripes). (W.C. Mann for The Cullman Tribune)

HANCEVILLE – On Sunday afternoon, Wallace State Theatre gave the last performance in a four-day run of the Disney classic “Mary Poppins,” in many ways saving the best for last.  Its sensory-friendly show, offering an approach geared toward audience members on the autism spectrum and with other special needs, may be the first ever of its kind in Alabama north of Birmingham.

Leading up to the performance, Technical Director Noah Carpenter told The Tribune, “We do adjustments to lighting to eliminate any strobe lights or bright flashes, we leave the house lights up a little bit to prevent the stage from being too bright and overwhelming for patrons, and then on the sound side everything is turned down just a little and we soften any harsh sound effects like crashes or explosions.  In addition to these things, a sensory-friendly show has a very open-door policy to allow patrons to come and go as they need to if they are overstimulated, and a lot of the house rules are relaxed. Patrons are able to interact in the ways that best help them enjoy the show; they can sing along or clap or anything they need to help them take it all in.”

After Sunday’s performance, Show Director Lauren Salerno told The Tribune, “I couldn’t be more proud of the cast and crew for their incredibly hard work to make this show a success.  The best part, though, is seeing children leave the theater with smiles on their faces and humming tunes from the show. While educational theater is meant to train future theater artists, we’re also very cognizant of the fact that we’re developing future artists and theatergoers through our young audience members.  I hope that after seeing ‘Mary Poppins,’ a young person will decide to take a tap class, join a children’s choir or audition for a play. That will have been greatest achievement with the production!”

Carpenter added, “I’m so incredibly thankful for the cast of this show and the chance to get to be a part of this amazing team of directors.  This was such a big show full of firsts for us here, and the students took every one of them head on. It was so much work in everyone’s department for this one but every day I’d walk out in the lobby just before doors opened and see all those excited kids and even their parents who were ready for a little reminder of a simpler time in their own life.  For me the few minutes a night seeing those faces make the 18-hour days that sometimes happen more than worth it! I hate seeing this one wrap, but as I told our cast after the show, if I know one thing after five years coming back to work with this department it is that they have joined the family, and this isn’t our last time on stage together. Once you join this department you always come back to this theater.”

Reaction to the sensory-friendly performance

Salerno said she was encouraged to do a sensory-friendly show by an email she received from a local parent.

“It’s definitely on my radar, because a lot of theater companies are starting to do that sort of thing.  I had a mom email me to ask if we were going to do one, because she would like to bring her child, but she had recently been to a performance that wasn’t sensory-friendly, and she didn’t feel that it was a positive experience for her child.  And I thought, ‘Why aren’t we doing that? We should be doing that.’”

The mom who initially contacted Salerno about doing a sensory-friendly show was Valerie Speegle Keller.  After accompanying her son Logan to Sunday’s show, she shared with The Tribune:

“First of all, I was really amazed at how many turned out for it.  When I turned around and saw the crowd I almost cried! And then the show itself was ‘Practically Perfect!’  To see my son sit there so engaged and so captivated by the music and the actors was a priceless moment. At times, he could  hardly contain himself in the seat. We had even practiced on how to clap, and I saw him do that a couple of times. Of course, his favorites were ‘Chim Chim Cheree’ and ‘Jolly Holiday’ and, of course, ‘Supercalifragilisticexpialidocious.’”

Logan, who attends the Cullman County Child Development Center, is a big music lover and a longtime fan of “Mary Poppins.”  Keller said he even gave her a little education on the show, talking to her about the Sherman Brothers who composed the original music.

Two years ago, Keller got the opportunity to take Logan to a theater production of the show which she called “amazing.”  The reaction of fellow audience members to a special-needs spectator, though, was a different story. Keller had to deal with the looks that special needs parents know all too well, and even people who asked to be relocated elsewhere.

Said Keller, “It was heartbreaking to think we would not  be able to take him to this type of thing that he loves so much.”

But then she discovered something radically different:

“Not long ago we attended a sensory-friendly showing of ‘Beauty and the Beast.’  That was like night and day. It was such a different experience; we were more relaxed.  There were other children and adults there that had some of the same difficulties. It was just a wonderful experience.

“A few months back, a friend of mine tagged me in a Facebook post showing that Wallace was going to be doing ‘Mary Poppins,’ because she knew Logan loved ‘Mary Poppins.’  I commented, ‘I wish they could do a sensory-friendly one.’ And she said, ‘Well, why don't you ask them?’ After doing some thinking, I went ahead and sent an email to one of the contacts in the article, asking if they would consider doing a sensory-friendly show.  To my surprise I got an email reply pretty fast, saying absolutely they were going to try it.”

Keller concluded, “I'm so appreciative to Wallace and to the theater department for going out on a limb like that and trying something new.  This means so much to not only the autism and special needs community, but to our community as a whole. Cullman County showed tonight its diversity and its willingness to accept others that might be a little different.  This is what it's all about, awareness and acceptance! My heart is full tonight because this may have been someone's first time to see a musical. What a memory they will have! What a precious memory for our family!”