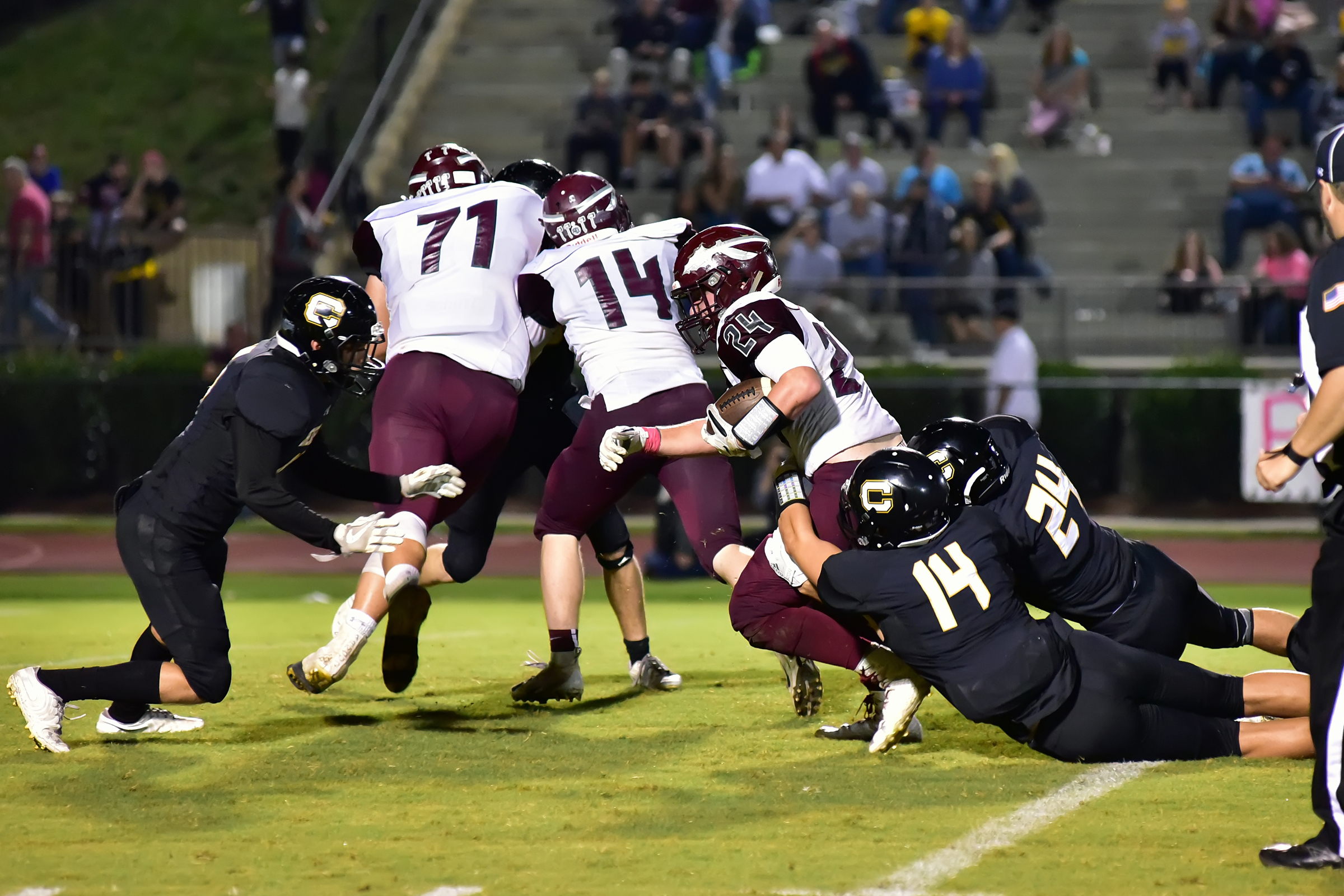 West Point running back Hunter Persall runs through a pair of defenders in the Warriors’ 14-6 loss at Corner Friday night. (Bill Piper for The Cullman Tribune)

DORA – The West Point Warriors (Class 5A, Region 7) looked to end their five-game losing streak when they traveled to Dora Friday night to take on the Corner Yellow Jackets. The last meeting saw West Point take the game, 49-42, in a wild back-and-forth contest. This year’s game was a real defensive battle; Corner wound up taking the game, 14-6.

The first half saw both defenses allow less than 100 yards of total offense. The Yellow Jackets finished with 67 yards, while the Warriors had 65.

West Point got pinned deep inside the 5-yard line to start out the second half. Back-to-back penalties put the Warriors at the 1, but Rylan Jones found Kolton Sapp for a big 46-yard gain to get them out of danger. After Hunter Persall got 4 yards, Jones found Levi Farley for an 8-yard pickup and another first down. Back-to-back first-down runs by Persall later on helped them set up a 16-yard touchdown pass from Will Cochran to Sapp on a fourth-down play to put them on the board first with 7:39 remaining in the third period. They missed the PAT.

Corner’s running game wore down the Warrior defense on its next series and the Yellow Jackets finished it off with a 23-yard touchdown pass on fourth down to give them a 7-6 lead after the PAT. West Point looked to take the lead right back on its next series and Persall and Cochran picked up key first downs during the drive. The Warriors were later forced to punt, but the snap sailed over the punter, putting Corner in great field position at the 21-yard line.

It took the Yellow Jackets just four plays to find the end zone as they scored on a 2-yard run to push the Warrior deficit to eight at 14-6 with 7:01 remaining in the game. West Point looked to answer on its next series. The Warriors converted yet another fourth down as Jones found Sapp for a 22-yard pickup. But on a third-and-10 from the 28, Jones’ pass got intercepted. Three first downs and a kneel later, Corner sealed the win, 14-6.

Jones finished 6 of 11 for 105 yards and an interception for the Warriors, who fell to 2-6 overall and 0-6 in the region. Persall ended up with 80 yards on 22 carries. Sapp finished with 84 yards on three receptions and a touchdown. The Warrior defense allowed just 194 yards for the game.

West Point will finish off region play next Friday when the Warriors travel to play Hayden (3-6).