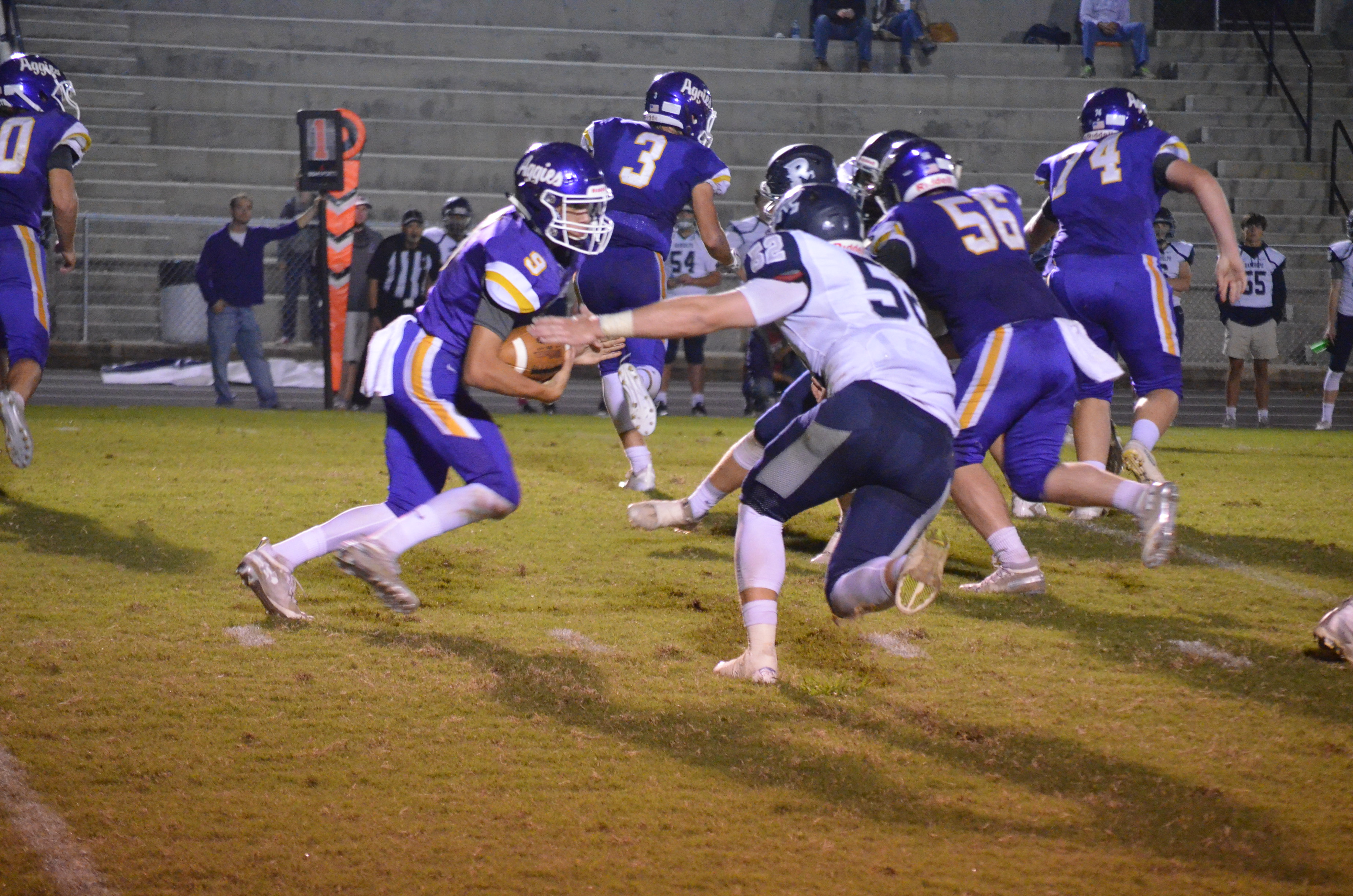 FAIRVIEW – On a night made for high school football, the Randolph Raiders traveled down from Huntsville to take on the Fairview Aggies. Coach George Redding and his Aggies were looking to win at home after winning last week at West Morgan, but it was not to be. The Aggies fell short, 41-12.

Randolph took the opening kickoff and went three-and-out as Fairview held the Raiders to just 7 yards. The Aggies took over at their own 19-yard line.  On the second play, quarterback Dayne Black mishandled the snap for a loss of 14 yards.

After the punt return, the Raiders started their drive from Fairview’s 46-yard line. After gaining only 3 yards, Randolph attempted a 40-yard field goal that drifted no good to the left.

Fairview was unable to convert a first down in three plays.  After the Fairview punt, Randolph was once again starting in Fairview territory at the 45-yard line. Four runs later, the Raiders scored their first touchdown on a 3-yard run by Joseph Thurman. Quarterback Jeffrey Copeland ran into the end zone for a successful 2-point conversion making the score 8-0 with 3:35 left in the first quarter.

Fairview was unable to convert a first down after Randolph sacked Black for a loss of 14 yards ending the first quarter. On the next series the Raiders ended up punting again to Fairview. After a couple of short runs, the Aggies changed gears and turned to Black’s arm as he completed two long passes to Mason Black for a combined 70 yards. This set up a short 1-yard run by Tyvn Ellis with 7:04 left in the half. The 2-point try was no good making the score 8-6 Randolph.

The ensuing kickoff was handled short by John Kelly returning to the Randolph 44-yard line fumbling the ball, recovered quickly by Fairview. Trying to take advantage of the turnover, Fairview was forced to punt after two negative runs and an incomplete pass. Fairview’s punt was blocked, and Randolph took over on Fairview’s 22-yard line. Six plays later, the Raiders converted the turnover into an 8-yard touchdown run by Luke Alison. The PAT was good, and the Raiders led 15-6 with 2:12 left to go in the first half.

Fairview’s struggles continued on its next possession aided by a Randolph sack of Dayne Black. Fairview lined up to punt and once again the Raiders blocked it. During the play, Jackson Stockton recovered the blocked punt on Fairview’s 14-yard line and ran the ball back for a quick touchdown. Converting the PAT, Randolph extended its lead to 22-6 as the half ended.

Fairview ended the half with negative rushing yardage, managing to score on the arm of the quarterback. Dayne Black was 3 for 6 passing for 71 yards. Randolph made the best of its good field position with only 89 yards total offense.

Failing to convert a first down after receiving the second half kickoff, Fairview punted to Randolph to its own 20-yard line. Randolph quickly flipped the field on a 51-yard run by Thurman and looked to be in position to score. On the next play, Alison fumbled, and Fairview recovered on its own 23.

Aided by a 17-yard run from Ellis, Fairview drove to the Randolph 29-yard line where the Aggies attempted to convert a fourth down on a pass that fell incomplete, turning the ball over to Randolph. A four-play drive by Randolph included a 42-yard pass from Copeland to Frederick Wessel capped off by a 5-yard touchdown run by Rhett Block. With 3:19 left in the third period, Randolph extended its lead to 28-6 after the 2-point conversion attempt was no good.

Randolph’s next drive, aided by Fairview penalties, resulted in another missed field goal. Fairview’s struggles continued as the Aggies failed to convert on fourth down at their own 28-yard line. Randolph quickly took advantage as Thurman scored on the very next play on a 28-yard run and the successful PAT made the score 35-12 with 6:01 left in the game.

Fairview went on a 10-play drive that again ended on a failed fourth-down conversion. On the third play, Randolph’s Alison broke through for 82 yards to complete the scoring. After a failed conversion, the final score was 41-12.

The Aggies travel to face another region foe at Danville (0-9) next week.

‘We may be small, but we are mighty’: Good Hope twirler Jenna Crumpton enjoying junior year