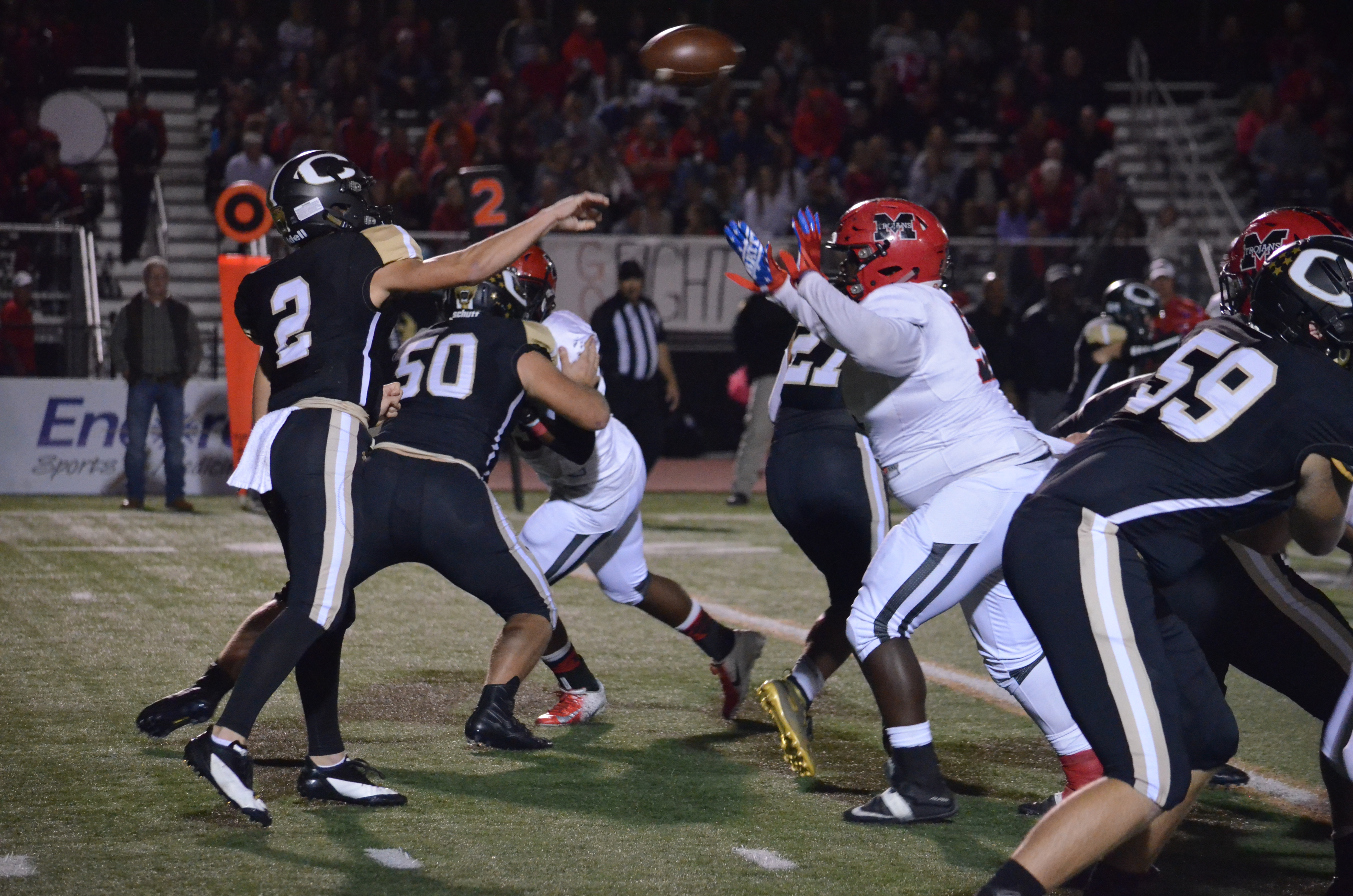 CULLMAN – It was senior night in Oliver Woodard Stadium Friday and for the final home game of the season, the Cullman Bearcats welcomed a very solid Muscle Shoals Trojans team. The Trojans are one of the top teams in 6A, Region 7 this season and picked up another important game in the region with a 47-17 road win over the ‘Cats.

Cullman came out with an aggressive mindset to start the game and ran a double pass on its first play from scrimmage, but it was intercepted by the Trojans. Just one play later, Muscle Shoals burst through the middle of the defense for a 78-yard touchdown that made it 7-0 after less than a minute had been played. Points were hard to come by for most of the first half, and Cullman trailed 7-0 until midway through the second quarter when quarterback Max Dueland hit running back Jayden Sullins on a deep post for 35 yards to set Cullman up at first-and-goal. Dueland scored from 1-yard out a few plays later on fourth and goal to tie the game up at 7.

Muscle Shoals was able to respond by scoring points quickly before the half, re-taking the lead with a 33-yard touchdown pass over the middle that made it 14-7 with five minutes to play in the second quarter. The Trojans then blocked a punt on the Bearcats’ next possession and returned it all the way down to the 1-yard line. Two plays later, Muscle Shoals stretched the lead to 21-7 and that was the score when the teams headed to the locker room for halftime.

Cullman’s offense was held to just 95 total yards in the first half and only 15 on the ground.

The ‘Cats defense forced a punt on the Trojans’ first possession of the second half and the offense was able to take advantage by moving down the field and getting some points. Sullins and his fellow running back Ezra Burks caught a 34-yard and 35-yard pass on the drive, respectively, setting up Luke Andrews for a 28-yard field goal that cut the lead to 21-10.

Muscle Shoals answered quickly on the ensuing possession, hitting another touchdown pass deep down the field for a score, this time from 36-yards out. The touchdown strike made it 27-10 Trojans midway through the third quarter. On the next Muscle Shoals possession, the Trojans made it 33-10 with a touchdown run from the 5-yard line. Cullman’s defense came up with a stop on the Trojans’ next possession when cornerback Jimnie Chau Le ripped the ball away from a Muscle Shoals receiver to set up his offense with a first down.

Cullman took advantage of the turnover by putting the ball in the end zone and cutting into the lead. Seth Gable scored from 1-yard out with just under 10 minutes to play to cut the Muscle Shoals lead to 33-17. The Trojans responded quickly again with another touchdown on the following possession that made it 40-17; a short punt from the ‘Cats was scooped up and returned for a touchdown late in the fourth quarter to make it 47-17. Muscle Shoals ran out the clock on its final possession to put the game away 47-17.

Sullins was the leading rusher and receiver for the Bearcats in the loss. The junior running back collected 53 rushing yards on 13 carries while also hauling in six passes for 82 yards. Dueland finished the night 14 of 27 for 198 yards. The sophomore was sacked five times in the loss.

The loss moves Cullman to 3-5 on the season and 1-3 in the region but none of that will matter next week when the ‘Cats travel to face the rival Hartselle Tigers.

Parkside teacher a state finalist for the 2021 Presidential Award for...