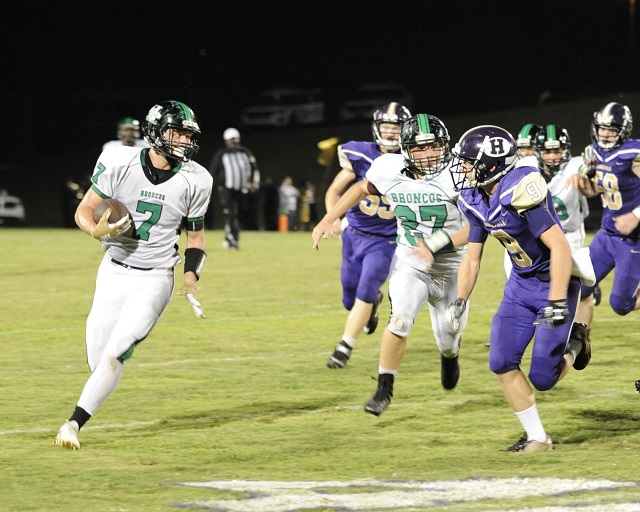 Tyler Boatright heads down the sideline in Holly Pond’s 22-6 win at Hanceville Friday night. (Howard Cole for The Cullman Tribune)

The game began with a Holly Pond kickoff that got flagged. Hanceville’s offense attempted to push past the 50-yard line but was held back by Holly Pond and forced to punt. Holly Pond returned the favor, punting the ball back four plays later. Hanceville started on its own 29-yard line but lost 5 yards to a penalty after having taken the ball. The rest of the first quarter continued like this with both sides losing ground after making gains. The quarter ended 0-0.

The second quarter continued much the same, with the Broncos going three-and-out.  Hanceville started on its own 33-yard line, but a penalty and fumbled trick play backed the Bulldogs up to their 15-yard line. A snap over the Bulldog quarterback’s head into the end zone gave Holly Pond a safety which put the first points on the scoreboard. After a short Hanceville free kick, Holly Pond scored the first touchdown of the night along with a 2-point conversion. Hanceville managed to drive into Bronco territory but handed over the ball on an interception. Holly Pond then used its momentum to move from the 50-yard line all the way to the end zone. Hanceville did manage to put up a touchdown within the last 30 seconds of the second quarter.

At the half it was Holly Pond 16, Hanceville 6.

Holly Pond received a Bulldog kickoff to start the third quarter near midfield. The Broncos and Bulldogs then traded turnovers. A Hanceville punt was offset by a Bulldogs’ interception that left Hanceville on the Holly Pond 38-yard line to finish the quarter with the Broncos on top, 16-6.

Both teams racked up penalties during the game, but after three personal fouls early in the fourth quarter, the referee took the extraordinary step of pausing the game for a talk with players on the field.

The fourth quarter continued with no scores or major plays until the latter half.  The Bulldogs opened the fourth quarter by stalling and turning the ball over to Holly Pond on downs.  The Broncos repaid the favor by handing over a fumble in the Bulldog red zone. Then, Holly Pond managed a drive that resulted in a touchdown. After that, the quarter continued uneventfully as Hanceville slowly chipped away at Holly Pond's defense, but the Bulldogs couldn’t move the ball when they had it.  The Broncos finished with the ball, taking a knee to close out the game, 22-6.

Holly Pond (3-1) will look to stay in the win column when they travel to Fultondale for a big regional showdown next week, and the Bulldogs (1-3) will try and pick up their first region win on the road against Vinemont.