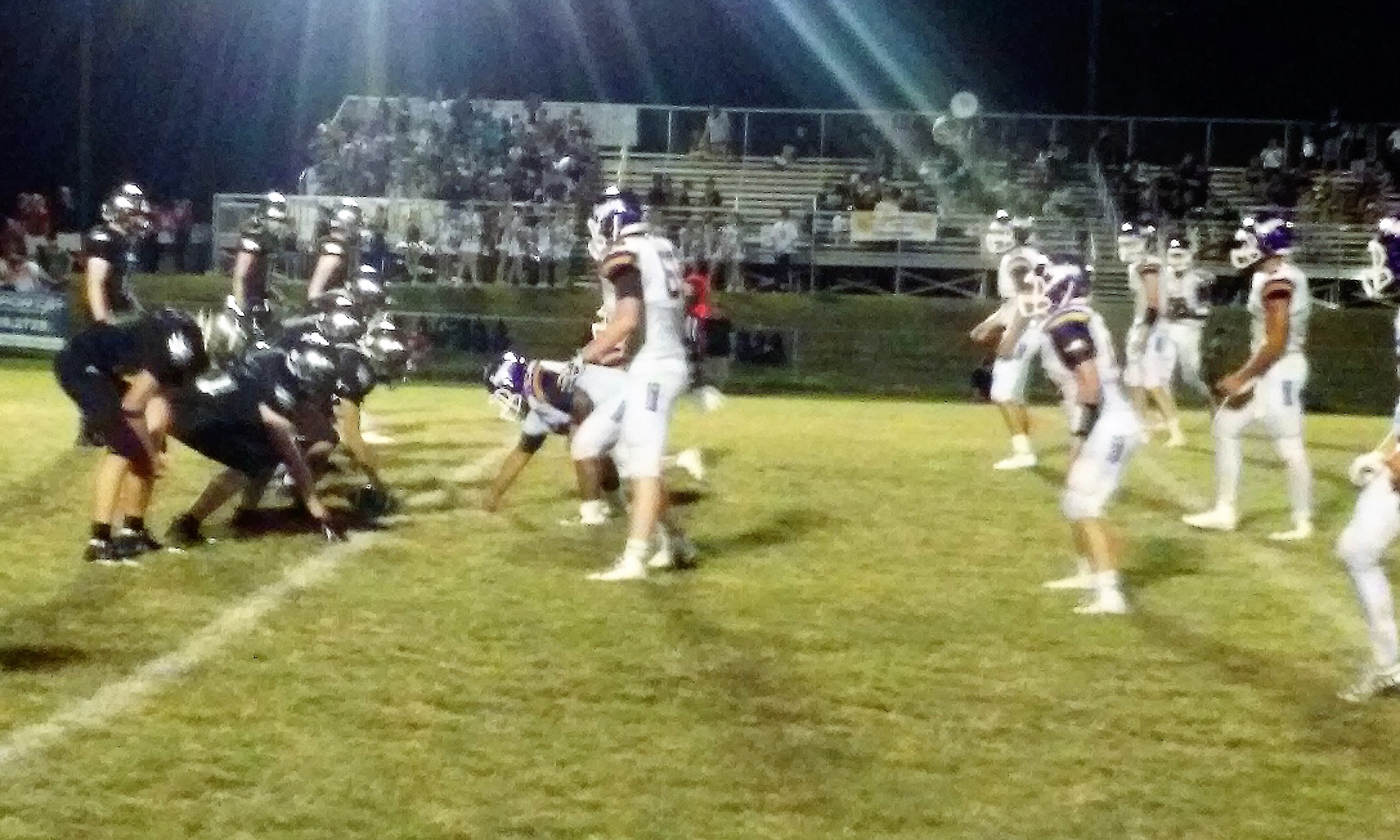 MADISON – Fairview (Class 4A, Region 7) traveled to Madison to take on the St. John Paul II Falcons (Class 4A, Region 7) on the campus of Discovery Middle School Friday night. The Aggies were looking to capture their first region win of the season. It was close for most of the game, but the Falcons pulled away late and Fairview wound up falling, 28-13.

Both defenses came to play for most of the first quarter; after the Aggies forced the Falcons into a turnover on downs, Fairview got into the end zone quickly when Dayne Black found a hole on the right side and scored on a 52-yard run on just the fourth play of the series to put Fairview on the scoreboard first with 3:48 remaining in the opening quarter. The defense forced a Falcon punt on its next series, but the Aggies were forced to punt on their next series as well.

A costly personal foul after a Falcon run ended up hurting the Aggies as St. John Paul II later scored on a 13-yard quarterback keeper to tie the game at 7 with 4:12 remaining in the first half. Fairview looked to break the tie on its next series as the Tyvn Ellis/Black combo on the ground got the Aggies closer to the end zone; after they got a first down at the 15-yard line, the offense stalled, and the teams went to the locker rooms with the score still tied at 7.

The Aggie defense couldn’t have asked for a better start to the second half when defensive lineman Jared Bachelor took the ball away from a Falcon running back on the first play. But Fairview didn’t capitalize, instead turning the ball over on downs on its first series.

For the second straight series, Fairview’s defense forced a turnover on the first play as Parker Martin jumped up and intercepted the pass at the 26-yard line, putting the Aggies in excellent field position. They moved the ball down to the 10-yard line behind big yards on the ground by Ellis and Black. But, on a second-and-7 from there, Black got sacked for a 13-yard loss, pushing the Aggies back to the 20. Black then found Ellis for a 14-yard gain. On fourth-and-6 from the 6, Black bobbled the snap, but he regained possession of the ball and found the end zone on a hard-fought 6-yard run to give the Aggies a 13-7 lead with 6:26 remaining in the third.

St. John Paul II quickly regained the lead, finding the end zone on a 12-yard quarterback keeper to make it a 14-13 advantage for the Falcons. Fairview went three-and-out on its next series and looked to get the ball back as it shifted back to defense, but two huge Aggie penalties proved costly and a 1-yard touchdown run put the Falcons up 21-13 with 9:52 remaining in the game.

The Fairview offense looked to get back in the end zone on its next series, but a bad snap on a third-and-1 play proved huge as the Aggies were forced to punt. The Aggie defense forced the Falcons to punt on their next series, and the Aggies got it back on the 20-yard line. After a pickup of 30 yards on Black’s pass to Devan Jennings, Fairview looked to continue that momentum on the drive, but its offense stalled when Black was intercepted. The Falcons increased their lead to 28-13 on a 23-yard quarterback keeper. Fairview looked to gain some momentum back, but Black was picked off once again, and the Aggies were sent home with the 28-13 loss.

Black and Ellis had good games on the ground. Bachelor, Martin, Dalton Payne, Dante Dumas and the rest of the defense played hard until the final play. The Aggies fall to 1-3 overall and 0-2 in the region.

Fairview heads back home for next Friday’s game against Priceville, the Aggies still looking for their first region win.