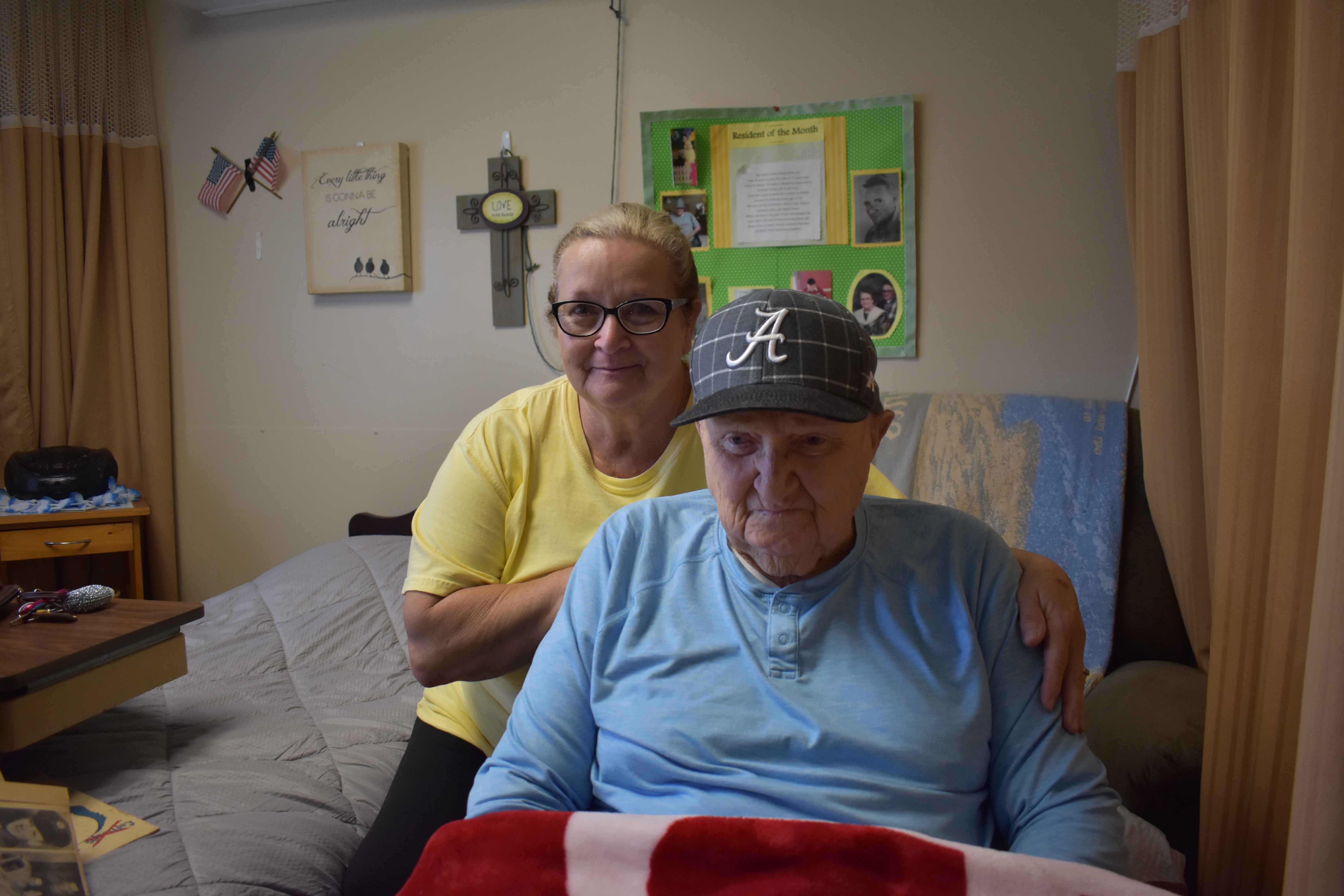 HANCEVILLE – This past weekend, there was a special party at Hanceville Nursing and Rehab Center as family and friends celebrated the 100th birthday of John Parker, a longtime Cullman County resident and U.S. Army veteran of World War II.  His actual birthday is today, Aug. 30.

Prior to the war, Parker was a hard-working kid who lived a simple life.  When he was drafted into the Army in Oct. 1942, his intake paperwork noted that he left school in 1935 after completing the seventh grade, at the height of the Great Depression.  Then, according to the “Civilian Occupations” section of the form, Parker:

In the Army, he trained with the 31st Coast Artillery Training Battalion at Camp Wallace, Texas, and spent a little time with the 339th Field Artillery Regiment of the 88th Infantry Division.  Then he headed overseas with the 532nd Antiaircraft Artillery Automatic Weapons Battalion.

Late in 1943, after an ocean cruise involving a fair bit of seasickness and a visits to the sick bay, Parker and his comrades arrived in Tunisia, which had been captured by the Allies a few months before to become a base for operations across the Mediterranean in Italy.

On Nov. 11, 1944, the 532nd arrived in the city of Naples in southern Italy to join other Allied forces driving the Germans north.  Before moving inland to join the push, Parker got to spend a few days in the already liberated port city, a brief “vacation” attested to by photos of the downtown, harbor and nearby Mt. Vesuvius in his box of war memories.

The unit worked its way north, pushing the Germans up the Apennine Mountains through the early winter.

“Boy, them were son-of-a-guns to get around,” said Parker.

An unassuming little German campaign pendant in his memory box, picked up along the way with a few other souvenirs, bore an image of the Edelweiss flower, indicating that the 532nd at least once crossed paths with some of the German army’s elite mountain troops.

By Jan. 1945, the unit was in northern Italy, and the German air force had been so beaten down that it was no longer a threat to the Allies; anti-aircraft gunners like Parker had simply run out of things to shoot at.  His battalion and three other anti-aircraft units were merged and underwent 31 days of retraining near Florence, before being re-designated the 473rd Infantry Regiment. Parker served as a 4.2-inch mortar operator.

The 473rd went into action in Feb. 1945.  In the spring, German soldiers began deserting in large numbers to surrender to the Allies, and Parker was relieved of his line duties on one occasion to escort a group of prisoners of war (POWs) to a train station from which they were transported to a holding camp.  He still has the paperwork, including a list of prisoners and guards, he was handed that day.

The 473rd and other units occupied the northern Italian city of Genoa in April 1945 and watched the last German unit in front of them surrender on the 28th of that month.  Four days later, the German army officially surrendered all remaining troops in Italy. The unit stayed on for a little while, on garrison duty and as guards at a POW camp. In July 1945, the 473rd was disbanded and its soldiers headed home.  Along the way, Parker got to see Germany, France and England.

During his service, Parker earned the European-African-Middle Eastern Campaign Medal.  The decoration in his daughter’s shadow box has a silver star on it, indicating that he took part in at least five major military operations.  He also received three Good Conduct Medals, given during wartime to soldiers who complete one year of service without disciplinary infractions.  For the three years of his service, he was an exemplary soldier. For him, a Good Conduct Medal was a simple matter of teamwork and following orders.

“Well, the way it was with me,” said Parker, “you as a group, whatever they wanted done, we tried to do it.”

He touched American soil again in Newport News, Virginia, and stopped just outside the port at the Army’s Camp Patrick Henry.  From there, he sent his family a short telegram: “Arrived safely expect to see you soon don’t attempt to contact or write me here – love, John.”  The telegram, of course, is in the memory box.

Parker returned to the Cullman area in late Oct. 1945, almost exactly three years after he left and resumed a simple farming life after the war, marrying and having kids along the way.  He wouldn’t talk about his experiences as a soldier for many years, even to family members.

Now at 100 years, Parker’s memory is fading; his recollections of the war more bits and pieces than a sustained narrative.  But daughter Nancy Bates has his memory box and the stories he did finally begin to tell later in life.

To The Tribune she said of her father:

“He’s always been my hero.  He’s a hundred years old, and I look at him as I know one day he’ll be gone.  But today he’s here, and I choose to honor him in the things that he did for his country, because that’s my hero.”