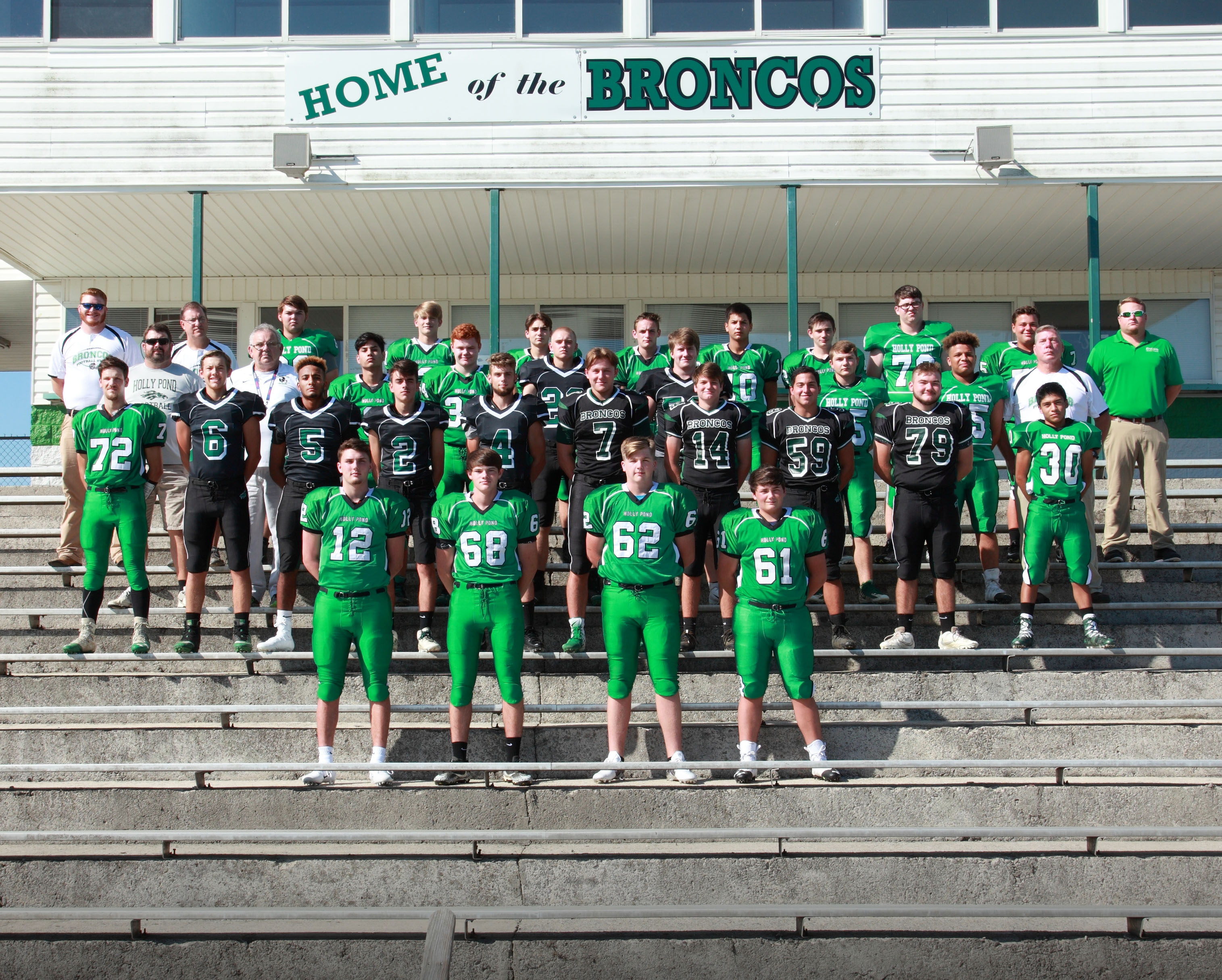 HOLLY POND – After posting a 7-4 record in 2017 and taking another trip to the playoffs, the Holly Pond Broncos have big goals for the 2018 season. The Broncos have now made back-to-back playoff appearances and post-season play is now becoming expected for the Green and White.

Mike Bates is entering his sixth season as the head coach for the Broncos and said he can see his team having a big year if they can stay healthy and focused.

“I think our schedule got a lot tougher and at the same time I think people expect us to be competitive, and I expect that too,” Bates said. “When you’re at a smaller school, injuries are such a major factor. If you get one or two guys hurt, it can just destroy your season if you’re not careful. I think if we can get the right leadership, we can have a very successful season, but we’re going to have to see some guys step up this season.”

The offseason attendance was a little disappointing for Bates this summer, but he’s optimistic about the players he sees working consistently and improving.

“We’ve not had as much success this summer with our offseason program as we’ve had in the past, and that’s a little disappointing coming off the last two seasons that we’ve had,” Bates said. “But at the same time the ones who have been here have probably had their best summer. So, we’ve just not had the numbers that we’ve had working out in the past, but before I get mad with the ones that weren’t here I always want to brag on the ones that were.”

On the field, the Broncos will have a lot of familiar faces on the offensive and defensive fronts this fall. For a team that leans on the running game, experience and talent up front is critical and that’s what Bates likes the most about his team right now.

“We’ve got a lot of guys back, a lot of our linemen especially. We’re really excited about that,” Bates said. “Our starting center is back, both our starting guards are back, one of our starting tackles is back and our tight end is back,, so those guys are all back and we’ve got some guys that I think are going to push them a little bit for playing time and that’s a good thing. You’re happy to have all those guys back because I don’t care what kind of skill players you have, if you don’t have the guys up front you’re going to struggle.”

Bates likes the guys the Broncos have coming back on the other side of the ball, too, with four of last year’s starting front seven returning and some experience in the back end.

“Defensively we’ve got both our defensive ends, our safety, an outside linebacker and a defensive tackle coming back,” Bates said, “and we’ve got a lot of guys that have played a lot so that’s good experience-wise, but we also need some guys to step up and be leaders.”

One of the players that’ll be playing on both sides of the ball for the Broncos this year, Jacob Ring, has been working hard this offseason to perform well at his linebacker spot as well as on the offensive front.

“I’ve been working on weights and my speed. I’ve got to get bigger on the offensive line and get faster because I’ll be pulling a lot for my running backs,” Ring said. “I’ll have good backs running behind me and they run hard.”

Ring and his teammates have big goals this season not just for the running game but to do something that has never been done at Holly Pond.

“I believe we should average 200 yards per game, honestly, with the backs we’ve got and the line we have. Our running backs are veterans that know what to do and our offensive linemen are mean when we play football,” Ring said. “We’re trying to win our first playoff game; it’s never been done, and I’ve always wanted to win a playoff game. We’re trying to get a home playoff game this year, that’s a big goal for us, to play at Holly Pond and get that first playoff win.”

The Broncos will return a lot of production in the offensive backfield. The running game is what everything is built on for Holly Pond, and both of its primary ball carriers will be back in green this fall. Senior running back Jeremiah Holmes will look to top his stellar junior season this fall, and Bates is looking forward to seeing it.

“Jeremiah started out as a freshman and I’ll be honest with you I wasn’t sure exactly where he would play. He was a little, skinny boy that had some ability but was just real green, and he has made himself into a football player, he really has,” Bates said. “Jeremiah is one of the leaders on this team; he’s a hard runner with good speed, he’s a great kid and he’s a team guy. Jeremiah never calls attention to himself, that’s one of my favorite things about him. He’s not a ‘Look at me’ guy, that’s not who he is. Sometimes his accomplishments are overshadowed because he doesn’t bring attention to them. He’s very humble and he’s a tough kid, a lot tougher than people think he is.”

Holly Pond’s offense is a little unique in that its most reliable power runner is the man under center. Kyler Chaney is back for his junior season at quarterback, and after he earned an All-State Honorable Mention last year, Bates is excited to see Chaney paired up with Holmes for another season.

“Kyler is a linebacker that can throw the ball,” Bates said. “He’s a real physical kid with great potential. He understands the game, and that’s one of the things I really like about him, and he brings a competitive spirit to the table that not everybody brings.”

With a lot of bodies returning on the offensive and defensive fronts, as well as two dangerous runners in the backfield, Holly Pond looks set up to take a run at three playoff trips in a row.

Click here to read about the Holly Pond Bronco Band.