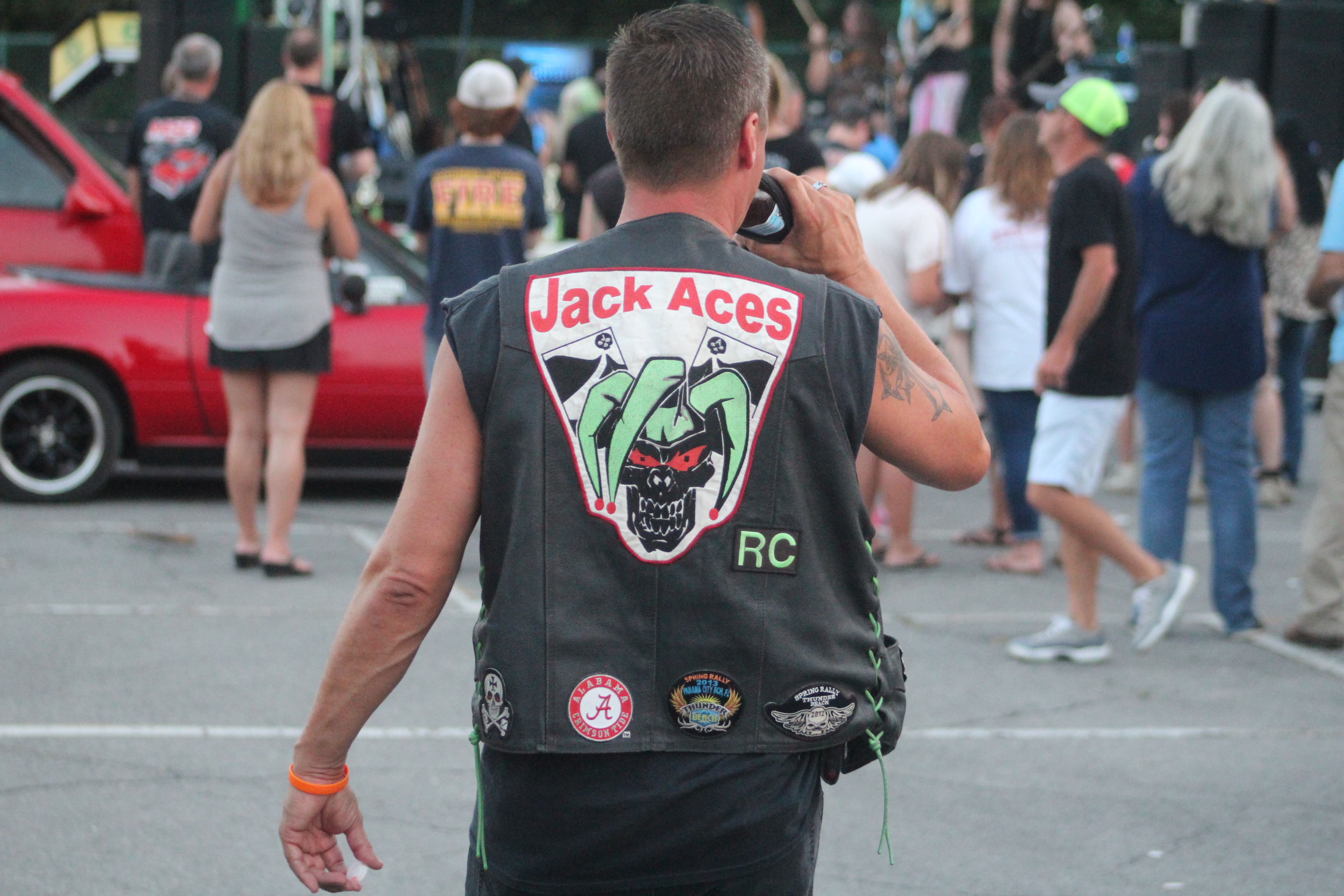 CULLMAN – Car and motorcycle enthusiasts filled the street near Moe’s Original BBQ in downtown Cullman Saturday afternoon and evening for the fourth annual Jack Aces Bike and Car Show. Proceeds from the show will benefit the Cullman Shop with a Cop Foundation. With at least 100 motorcycles registered and 40 cars and trucks, this year’s event has grown since last year. The event raised around $4,200, according to Jack Ace’s President Derrick Barton.

Jack Aces posted to its Facebook page Sunday: “Our Jack Aces 4th Annual Bike & Car Show was a HUGE success.. We had record registration and record attendance this year.. For that reason, we will be making our largest donation to CPD Shop with a Cop to date…Thank you all that come out to support the show.. We hope you all had as good of a time as we did!
A big thank you to all of this year's sponsors..”

The Tribune spoke to many participants including Cullman residents Bob and Vicki Howard. The Howards, who will celebrate their 40th anniversary on Sept. 30, had their first date at a car show in Birmingham 42 years ago. They have enjoyed buying and restoring automobiles and attending cruise-ins and shows for many years. Bob Howard brought his ‘46 Ford truck and Vicki turned heads in her ‘64 Corvette.

Said Bob Howard, “I have had my Ford truck for 42 years and restored in about 12 years ago. I repainted the truck last year. The Corvette we bought from California back in 2001 and the tags are original tags.”

Vicki Howard added, “I grew up with two older brothers and I have always enjoyed cars. We enjoy the cruise-ins and car shows. We slowed down for a while until our kids were grown and now we get to go to more events.”

Young Jaylynn, who will turn three next month, attended the show with her grandparents and older brother. Jaylynn did like the cars but made it clear that the bikes were her favorite.

With so many individual tastes and preferences, one of the judges for the motorcycles explained, “We look at attention to detail and it's the little things that make the difference. You can spot when someone really had a plan and saw it through.”

Winners in the motorcycle categories were:

Winners in the car/truck categories were:

Besides the incredible cars and bikes, this year’s event featured a great local band, Another Hero, that played rock favorites into the night. Also joining them was a young and extremely talented group out of Bessemer, All or Nothing, that blew the crowd away with original songs and some 80s hair band greats.

Barton explained, “Our brother Timmy, who is also with the Cullman County Sheriff’s Office, is in Huntsville Hospital going through a 30-day treatment for leukemia. He had been in remission for a year and a half. After this 30-day treatment, he will be home shortly before traveling to Vanderbilt for a 100-day treatment including a bone marrow transplant. During these three months, Timmy and his family will have to relocate to Tennessee and pay many out of pocket expenses, possibly including renting and furnishing a place or a lengthy hotel stay. The Jack Aces will continue to do whatever we can to help his family as he fights this cancer.”

For more information on Jack Aces or to donate, visit www.facebook.com/jackaces.garage.