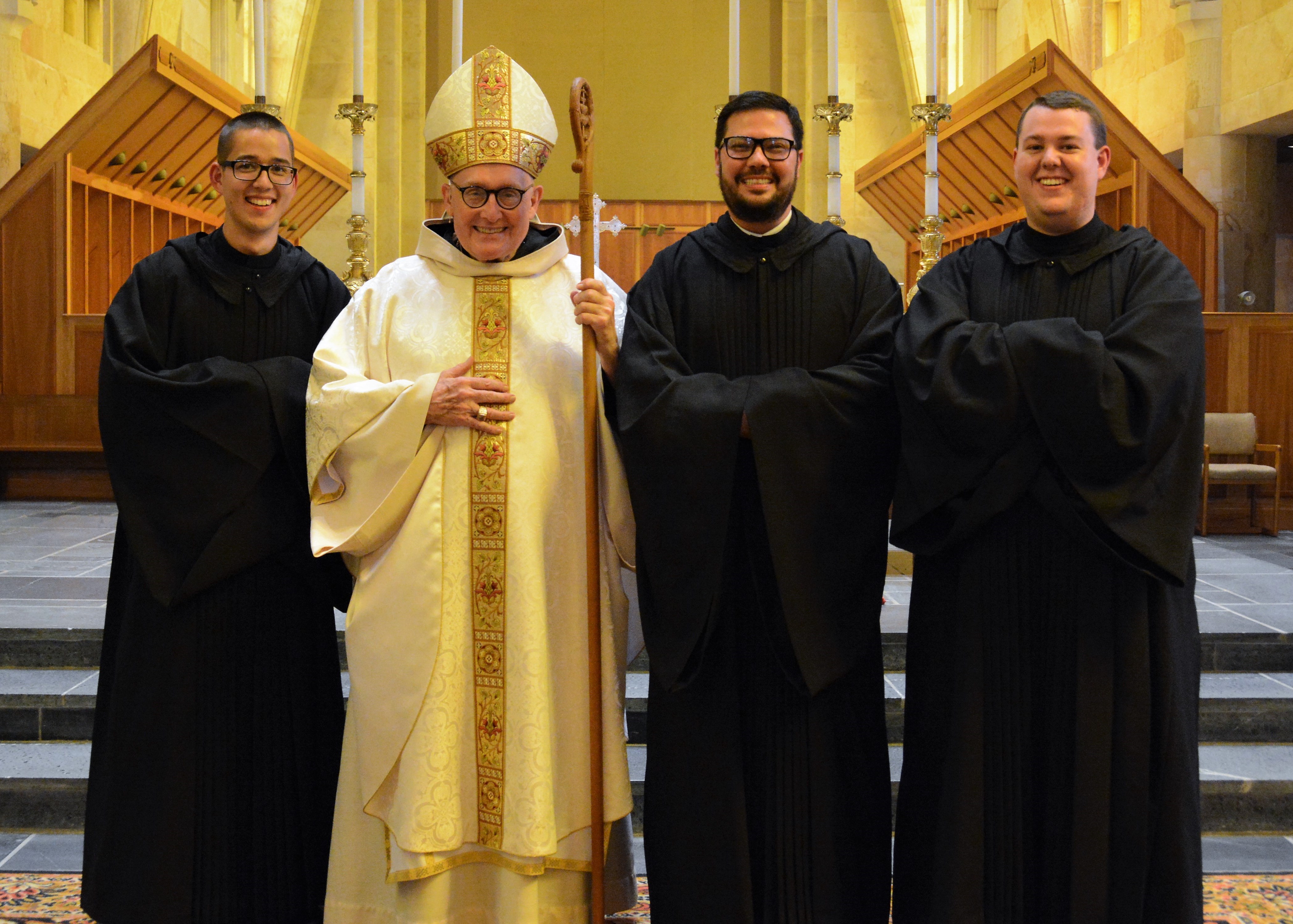 CULLMAN – It was a grand celebration at St. Bernard Abbey on Monday, Aug. 6, 2018 as three monks made their Profession of Solemn Monastic Vows in the Abbey Church:   Br. Dominic Lee, Br. Paschal Pautler and Br. Pachomius Alvarado.

Visiting monks from five different monasteries, priests of the Dioceses of Birmingham and Nashville, several communities of religious sisters, seminarians and faithful from around the country traveled to St. Bernard for the Mass of Solemn Profession.

During the Mass, Fr. Marcus Voss, junior master of the monastery, presented each as a candidate for solemn vows to Abbot Cletus Meagher, O.S.B. and the community.  After the community gave its affirmation, Abbot Cletus delivered a homily for the occasion. In his remarks he spoke of the vowed life and the rich monastic tradition that is the heritage of those who live the Benedictine vocation, renouncing everything to follow Christ.

Following the ancient custom, each professed his vows before the Abbot and then signed the hand-written document on the altar, along with two witnesses.  After lying prostrate before the Altar while the Abbot sang a prayer of solemn consecration over the brothers, they were clothed in the monastic cuculla (a flowing pleated cowl) given to monks who have solemnly professed their final monastic vows.

After the liturgical celebration, the congregation joined the monastic community for a festive dinner in the St. Bernard Dining Hall.

Brother Dominic (Stephen) Lee, 24 years old, was born in Madison, Alabama. His family moved to Huntsville when he was about 10 years old. He has two older sisters and three younger brothers. One of his sisters is a Benedictine nun at the Abbey of St. Walburga in Colorado. Happily, she was able to travel to St. Bernard for the occasion. Br. Dominic was homeschooled all through high school education.  Br. Dominic is currently enrolled at Belmont Abbey College in Charlotte, North Carolina, where he is studying philosophy and mathematics. He plans to graduate this December.

Brother Paschal (Gabriel) Pautler, 22 years old, was born and raised in Birmingham. He has an older brother and sister, as well as a younger sister and two younger brothers. He attended St. Rose Academy in Birmingham, a school administered by the Nashville Dominican Sisters, before coming to St. Bernard Prep for his high school education. After completing his course of studies at St. Bernard Prep, he graduated from SBP in May 2014 and entered the monastery just three weeks later.  Br. Paschal is currently enrolled at Belmont Abbey College in Charlotte, North Carolina, and is studying philosophy, Latin and business management. He is set to graduate in December.

Brother Pachomius (Gustavo) Alvarado, 40 years old, was born in Matanzas, Cuba. His mother still lives in Cuba. His father is deceased. He has one older sister who lives in Florida, along with her two children. After attending university in Cuba, he moved to Bogota, Columbia, where he worked for a marketing and public relations company. He held that job for two years during which time he learned of the Benedictine monastery of Tibati in Bogota. After several visits to the monastery, he decided to join the monks in Bogota.  However, after about a year and a half, he chose to leave Tibati before completing his Novitiate. While at the monastery of Tibati, he had met Fr. Joel Martin, O.S.B., of St. Bernard Abbey, who was in Colombia recruiting for the prep school.  Fr. Joel invited Br. Pachomius to visit St. Bernard Abbey, an invitation which flowered into a life at St. Bernard Abbey.  He currently serves as the Abbey Archivist.

St. Bernard Abbey is Alabama’s only Benedictine Abbey and home to more than 30 monks.  For more information or to learn more about a monastic vocation visit www.stbernardabbey.com.