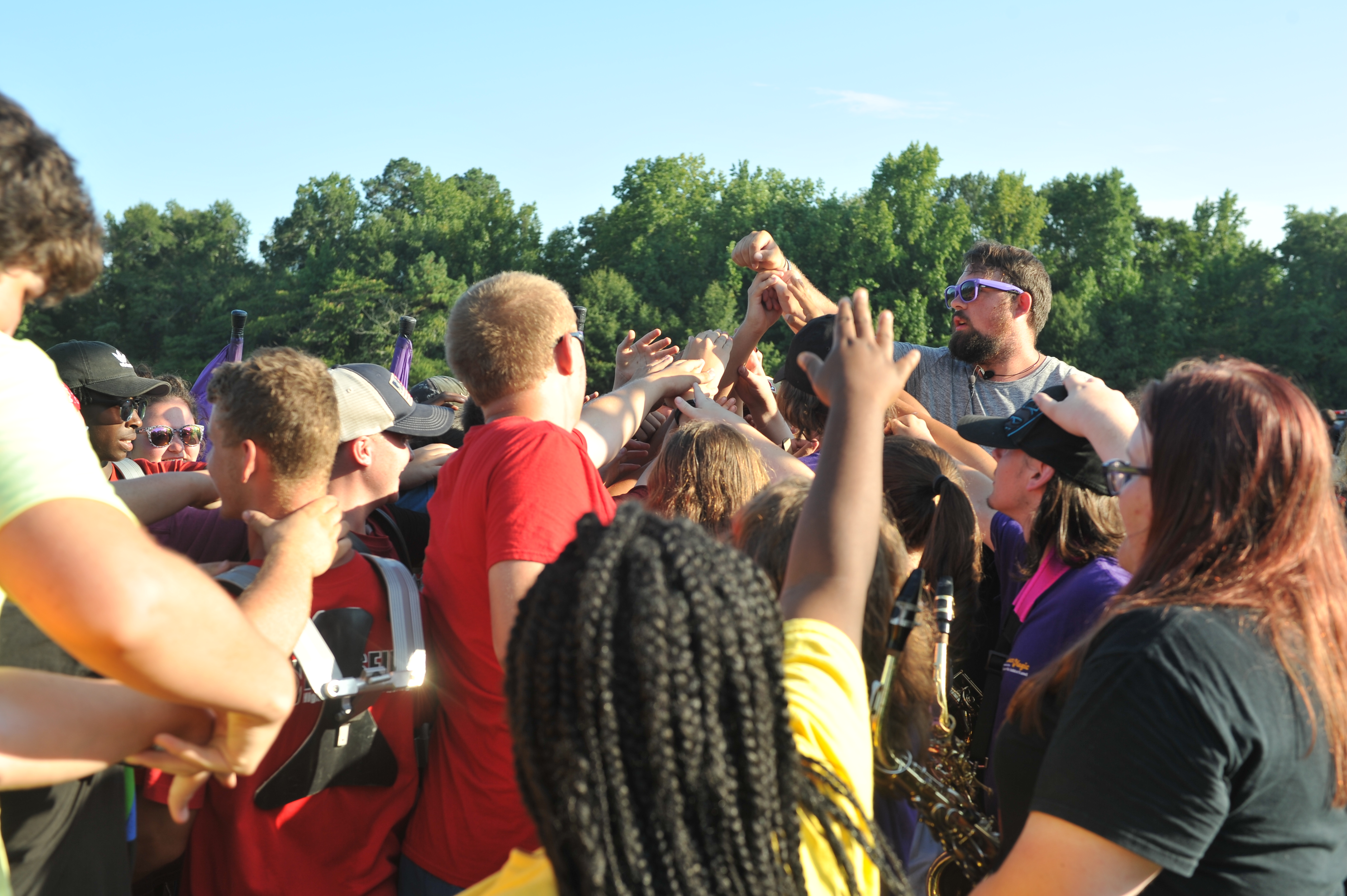 Jesse James (top right), director for the Pride of Hanceville Band, prepares to pray with band members before the band's end of band camp preview performance at Hanceville High School. (Hayden Hyatt for The Tribune)

HANCEVILLE – Friday evening, the Pride of Hanceville Marching Band performed a preview show for band family members and the local community to punctuate the end of band camp at Hanceville High School.

At the performance, the band played and marched to a few songs from its new halftime show, which is titled “Viva” and features songs from Elvis Presley. After the music and marching, band members enjoyed ice cream and a water balloon fight to cool off after the hot week.

Jesse James, who is at the start of his first year as director for the Pride of Hanceville Band, said the preview show went well.

“They put on a great performance,” said James. “You could tell that they really enjoyed it, and they really worked hard.”

Pat Stricklin, whose son is in the band, also enjoyed the show. “They're good, really good,” said Stricklin. “They sounded great, I like it. I love halftime shows.”

Nigel Malcom, who has a son in the percussion section, thought the performance was good, too. “My son is in the band; he's percussion,” smiled Malcom. “I thought it was good, very entertaining.”

Bandmates and family members enjoyed a well-deserved reward after the show.

“We had an ice cream social for all the kids, to get some ice cream, hang out and socialize with their families and their friends,” James said. “Hanceville First Baptist Church brought some water balloons by, so they can throw some water balloons around and get wet, just have some fun. They've been out here, and it's been this hot all week. I guess water balloons wouldn't be too bad.”

James also expressed his satisfaction with the results of the band camp.

“The kids did great; they have really pushed hard this week,” said James. “You know we went from 8 to 8, and the kids got here at 7:30 a.m. or earlier. I think the first day, all my section leaders were here at 7 in the morning. They beat me getting here.”

Band boosters, family members and churches contributed to the success of the camp, according to James.

“Band camp went really smooth. We had a great staff working with us this week. Our boosters and band parents went way out of their way to help us and make sure that we had everything we needed,” James said. “All the local churches pitched in and fed us, and boosters fed us at supper every night, so the kids never went hungry. It was just amazing the amount of support and help that we had this week. If it wasn't for that, this camp may not have run as smooth as it did.”

James left some of the show to be revealed at the band’s first halftime performance.

“We have so many surprises in store,” said James. “We didn't play the closer yet. I can't give away the surprise. I'm going to try to save it as best I can.”

The Pride of Hanceville Marching Band has a big year ahead of them and James is looking forward to it.

“I'm excited to get the school year going, I'm ready for it,” James said. “Our first game we play Sumiton Christian on Aug. 24, and I'm looking forward to having a good show and having a good year, a successful year.”