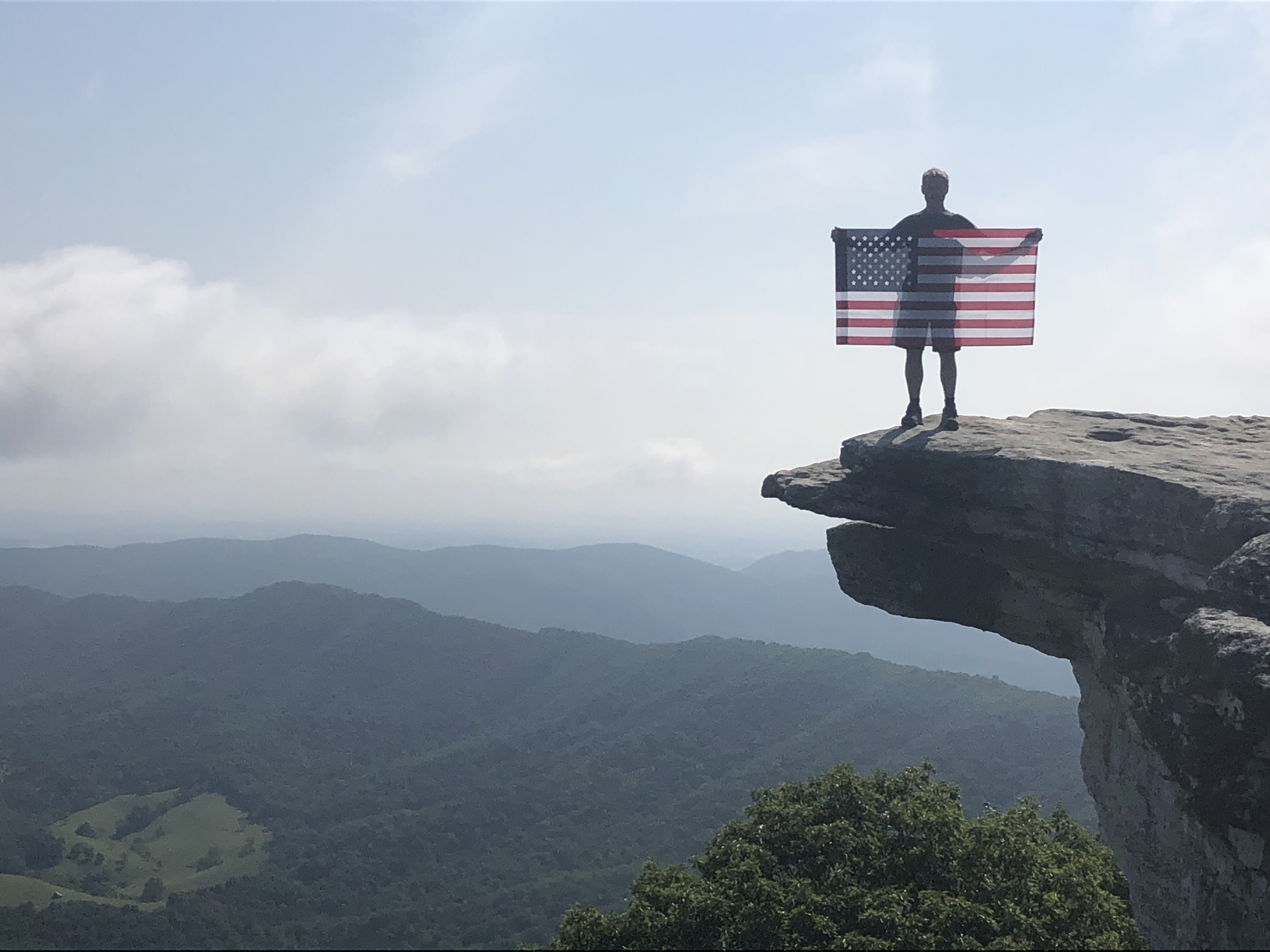 At McAfee Knob, just beyond the 700-mile point in Virginia

FAIRVIEW – The Tribune has been following the journey of retired U.S. Army Col. Donald Fallin as he hikes the Appalachian Trail from its southern starting point in Georgia to its northern terminus in Maine, raising awareness and funds for the Johnny Mac Soldiers’ Fund that supports the education of both veterans and the children of fallen warriors.  Fallin will celebrate Independence Day somewhere in the region around Bald Knob and Glasgow, Virginia, near the 800-mile mark on the trail.

The Tribune first met Col. Fallin shortly after he passed the 500-mile mark near Pine Mountain, Virginia.  Since then, he has continued to share photos with us, and has kept us up to date on where he is. On Sunday afternoon, he was approaching the 800-mile mark.  In honor of Independence Day, we celebrate both our nation’s beauty and a soldier’s determination to serve his comrades by sharing some of the colonel’s pictures with our readers.

Fallin told The Tribune, “I’ve been blessed: grew up here in Fairview, had a very rural life, entered the service and had just a wonderful career.  And I just thought it would be an opportunity to try to do something to give back a little bit for all the blessings I had been given.”

According to the organization’s website, “Johnny Mac Soldiers Fund honors military service and sacrifice by providing scholarships to veterans and military family members, particularly children of our nation’s fallen and disabled.

“Time and again, our soldiers and their families are asked to give of themselves for the rest of us. While they ask little in return, we owe them so much. Through education, we give back to those who gave. We give back to ‘Our Own.’ It's the least we can do.”

The fund was named for Col. John McHugh, who was killed by a suicide bomber in Afghanistan on May 18, 2010.  The West Point graduate and Army aviator left behind five children, who were aided in obtaining educations through a fundraising effort that became the Johnny Mac Fund.

An organizational fact sheet said: “Research shows that over 20,000 children have lost an active-duty military parent over the last 35 years.  While those children are eligible for education benefits, often there are substantial college funding gaps remaining. We proudly work to alleviate this burden from those families who have already given so much to our nation.

Fallin has established a crowdfunding campaign through Gofundme.com subsidiary Crowdrise for anyone who wishes to contribute to the Johnny Mac Soldiers Fund.  As of Monday morning, July 2, Fallin had raised $8,875 of his $10,000 goal.

Johnny Mac is a 501(c)(3) nonprofit, and donations are tax deductible. To contribute or find out more, visit www.crowdrise.com/o/en/campaign/dons-appalachian-trail-hike-for-the-johnny-mac-soldiers-fund/donaldfallin.