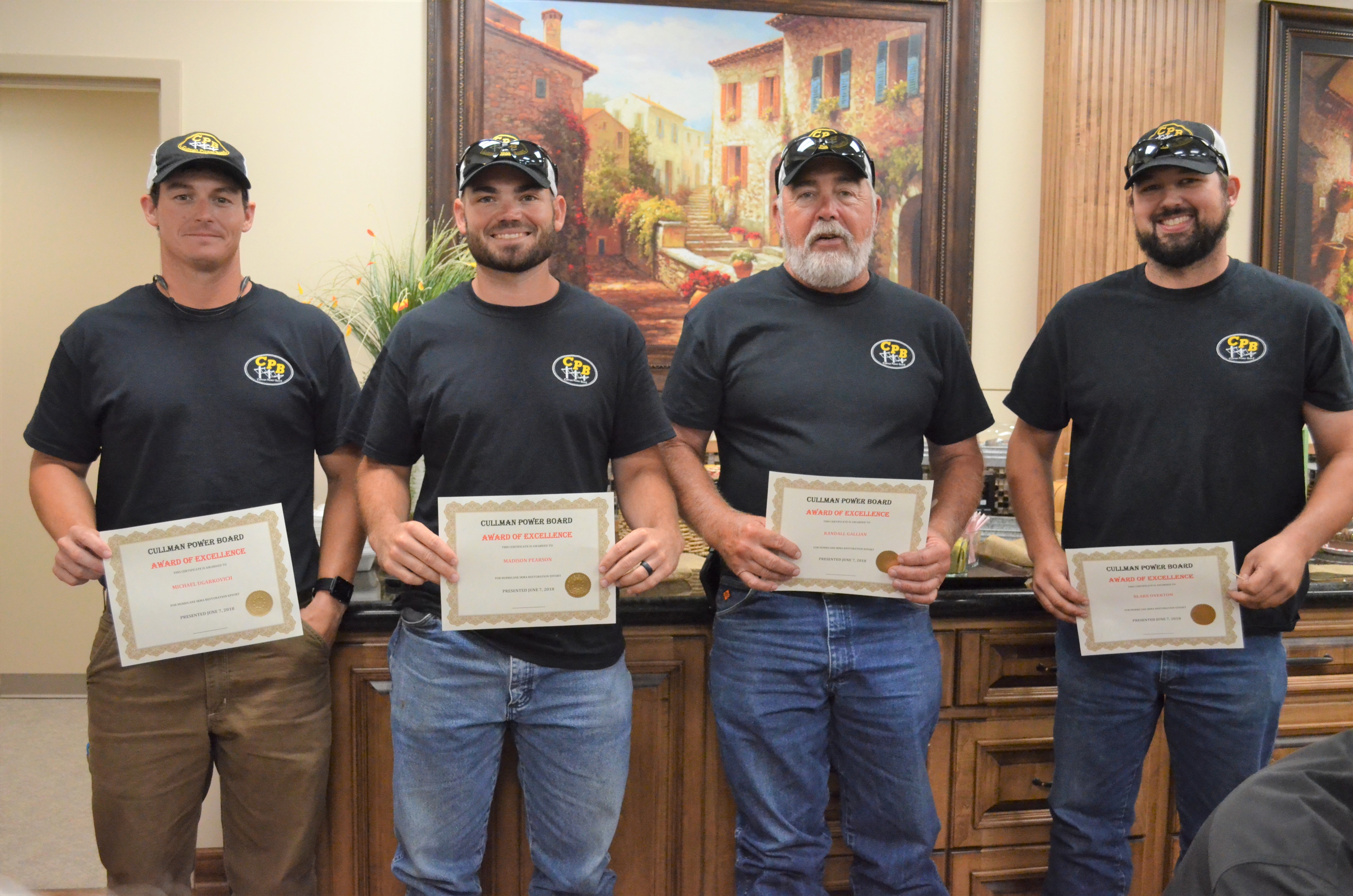 Five linemen received the Cullman Power Board Award of Excellence for their work in Florida in the aftermath of Hurricane Irma. L-R: Michael Ugarkovich, Madison Pearson, Randall Gallia and Blake Overton. Not pictured: Tyler Hancock (Nick Griffin for The Tribune)

CULLMAN – The Cullman Power Board’s third annual Lineworker Appreciation Day was celebrated Thursday and a long list of speakers and recognitions, along with steaks provided by the Cullman County Cattlemen and Cattlewomen’s Association, made this year’s event another success.

The invocation was given by Henderson, and Cullman Power Board General Manager Mike Manning got the recognitions started by awarding five linemen the Cullman Power Board Award of Excellence for their work in Florida in the aftermath of Hurricane Irma. Randall Gallion, Madison Pearson, Michael Ugarkovich, Blake Overton and Tyler Hancock each received a certificate.

After awards and recognitions had been handed out, Fuller spoke briefly about his appreciation for the dangerous, important work that the linemen do.

“We’re greatly appreciative of everything you do, I guess one of the main things that’s preached to you, but safety is the biggest thing for you guys I’m sure. It doesn’t take but one little mishap for something to go wrong and that’s one of the main things that all of us need to keep in mind with all you guys,” Fuller said. “We appreciate what you do because we’re sitting there thinking ‘I wonder when the power is going to come back on,’ but we know that you’re getting out there in not very good weather sometimes taking care of it.”

Gentry shared his admiration for the job that linemen do and how much it impacts people’s lives.

“I think about the job you do, and I will tell you this, electricity scares me to death. I would much rather be shot at or have somebody punch me in the mouth or whatever than climb a poll and mess with electricity. I can remember being a young deputy out there and when power lines go down it was always a blessing to see you guys roll up and take care of us and protect people in the community,” Gentry said. “Whether you realize it or not, what you do for the community goes above and beyond a blessing, because when you don’t have power and some of the other things we have, people’s lives are turned upside down. It really is like the good Lord said, you’re bringing light to a bad situation and you do it without fear, without hesitation. It can be the worst storm in the world, and y’all are out there taking care of the citizens of this county.”

Rohrscheib also serves as a tactical flight officer in the CPD’s aviation unit and has worked directly with some of the linemen in multiple scenarios. She said she quickly found an appreciation for the work they do.

“One of the biggest things that comes to my mind when it comes to working with you guys and how much we do appreciate you, is when we have structure fires and we rely on you to come and cut the power to that structure. We’ve also had tac. team situations where we had a hostage or someone in the house threatening to set the house on fire or something like that and we needed you guys to come and cut the power,” Rohrscheib said. “That’s risky for you guys, too, because you’re coming into a hostile environment that you’re not even aware of and you’re just willing to come and try to help us out, so we appreciate that very much and I want you guys to always know that you have an open communication with us.”

Cullman Power Board Event Coordinator Beth Ann Chivers and Superintendent of Operations Wyatt Pettus both believe the annual event is a great opportunity to recognize efforts that oftentimes go unnoticed.

“I think it’s really a great event, like Pastor (Todd) Henderson said, these guys go unrecognized and unappreciated the majority of the time because everything is working like it’s supposed to,” Pettus said. “And when stuff is not working, and lights are out, that’s when we shine, and we get the appreciation so stuff like this really goes a long way to show everybody how much they are appreciated.”

“It’s really a great event for us to be able to recognize them for the work they do,” Chivers said. “Our guys also go out and help the (Cullman Electric) Co-op, they’ve gone to Florida to help with Hurricane Irma, they just go above and beyond all the time.”