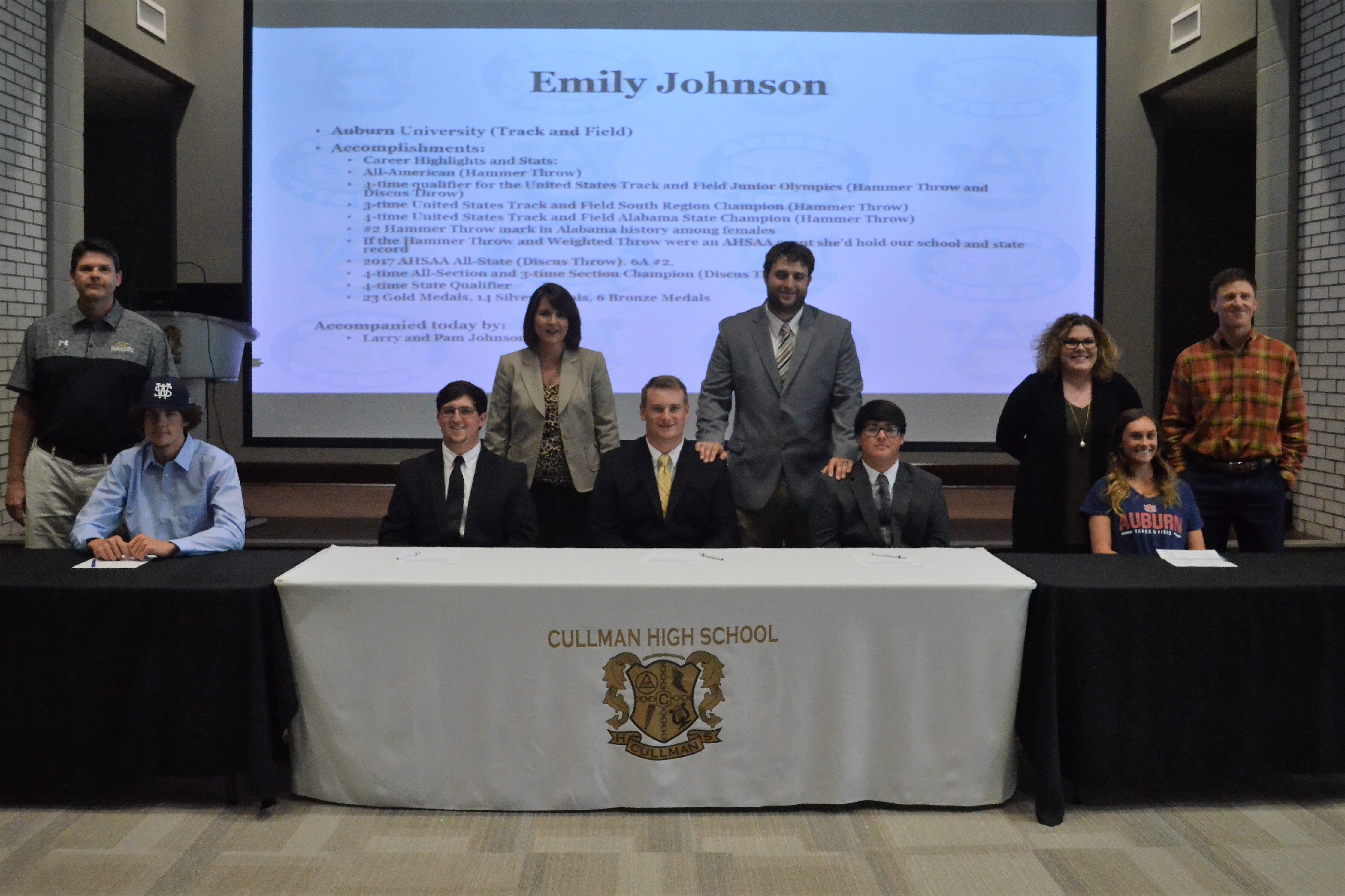 Finch ended his playing career at CHS with 937 points and 698 rebounds, averaging 10 points and eight rebounds per game. Finch is excited to play at the next level and credits his preparation to his coach and the Cullman program.

“Coach (Bobby) Meyer prepared me very well day in day out at practice, practicing the grind, waking up and working out in the morning, getting shots up after practice. It’s a great program, well-disciplined,” Finch said. “I’m going to miss the fellowship with my teammates for sure, but it’s time to take it up a notch.”

Finch is ready for the next step but admits that he’ll miss the bonds he’s formed with his coaches and teammates over the years.

“I’m definitely going to miss playing with the friends that I’ve grown up with all my life, it’s going to be tough. I love Coach Meyer and all the other coaches, so I’ll miss that, but at the same time I’m looking forward to this new opportunity to do some bigger things and hopefully go somewhere bigger from Wallace, that’s the main goal.”

‘Cats Head Coach Bobby Meyer has seen Finch’s game grow a lot over the years, but he also sees several areas where Finch is going to improve quickly.

“I think what really impressed Wallace was that he can shoot the ball. He’s a very good shooter with good touch even though he’s a bigger kid. He has a chance to expand his shooting perimeter and so I think that’s something exciting,” Meyer said. “He loves the weight room; he’ll be a kid that can get bigger and stronger to kind of change his body and change his position and become more athletic because of strength. Those are two big things that I think he’s improved on over the years are his athletic ability and his basketball skills. He’s kind of a swing man, he can play in or out, he’s comfortable with both. Just that experience against guys at the next level will elevate his game.”

While Finch has been putting up numbers on the hardwood, Emily Johnson has been racking up medals out on the track. In her time at CHS, Johnson collected 23 gold medals, 14 silver medals and six bronze medals, was named an All-American in the hammer throw, was a four-time qualifier for the United States Track and Field Junior Olympics, a three-time United States Track and Field South Region Champion, a four-time state champion, a four-time All-Section winner and three-time Section Champion and a 2017 All-State selection for discus throw. She holds the no. 2 all-time mark in Alabama for hammer throw among females and if hammer throw were and AHSAA event, Johnson would hold the school and state records.

After building a long list of accomplishments and friends as a Bearcat, Johnson is looking forward to pushing herself to new heights on the plains.

“I’ll probably miss my teammates the most because they are so awesome, I love them,” Johnson said. “But in college I’m really looking forward to challenging myself because I know that they’re going to push me and I’m ready for that.

Johnson credits her father, who is part of the track and field coaching staff, for a lot of her development over the last few years.

“My dad prepared me the most, mentally and physically he really did,” Johnson said. “He helped me a lot with teaching me the right form and stuff so without him I wouldn’t have been able to do this.”

Dueland is going to miss having some familiar people out on the water with him but for the most part he doesn’t expect a huge change in what he does when he starts fishing for the Falcons.

“Most of it will be the same, not too different. One thing I will miss is my uncle fishing with me all the time, he helped me to become the fisherman that I am,” Dueland said. “He would take me out on the lake and I don’t get that in college. We have to go out on our own and find fish on our own which is kind of what I’m doing right now but he still helps me a little.”

The thing that Dueland is most excited about is getting the chance to continue competing with a couple of the same guys he’s been fishing with in high school.

“It means the world to me,” Dueland said. “I’ve always dreamed about doing it and I’m finally here.”

The biggest change that Glasscock is looking forward to in college will be a little more independence out on the water.

“I’m looking forward to not having a boat captain for sure,” Glasscock said. “It’s going to be a lot tougher on us, but I think it’ll be a bigger learning experience than having someone take you out and show you. You have to find your own fish and you have to do it all on your own and I’m ready for that.”

Glasscock is also excited about the opportunity to continue competing with some of his best friends, saying the three of them moving on together ought to give them a higher comfort level than most anglers leaving to compete in college.

“I’m definitely ready for it. We grew up together and I’ve know them pretty much my whole life,” Glasscock said. “We’ve always been best friends and I’m just really glad that I’ll get to go to college with them as well.”

The third of the fishing signees Wednesday afternoon was Garrett Whitney. Whitney is a three-year member of the CHS fishing team and has collected three top-100 finishes in his high school career. Like his fellow anglers, Whitney is excited about continuing his fishing career with his friends

“It’s going to be great. Usually when you move off to college you don’t know anybody but we’re going to have each other and that’ll make things a lot easier,” Whitney said. “We’re going with a group of guys that do exactly what we do so I think it’ll be alright. We’ll all get along pretty good.”

As far as what Whitney will miss the most, the first thing that came to mind was his coach. Although he’ll definitely miss the time he’s spent with his coaches at CHS, he’s also excited about getting some more control out on the water like his teammates.

“I think I’m going to miss Coach (Kyle) Morris the most. Before high school we really didn’t do any of this and competitive fishing wasn’t really a thing outside of the big leagues, but what I’m looking forward to the most is not having a boat captain,” Whitney said. “We’ll get to do it by ourselves and kind of go out there and use each other and do some things on our own.”

Bearcat Fishing Coach Kyle Morris reiterated just how much it means to them to be able to advance their careers together and how he has seen all three develop into talented young fishermen.

“These guys were there after we’d kind of been established for a year and rolling into that second year these guys were freshmen coming in. They all joined the team their freshman year and they took some lumps. Their sophomore year was a struggle for all of us. We had a really rough year and they took a lot of lumps, but what impressed me the most was they just kept working. Every day they learned something new about the lake and they learned something new about how to find fish,” Morris said. “Last year as juniors they won the state championship and it’s just a team growth and maturity that has been the biggest thing with these guys. They’re inseparable, when they wanted to visit Montevallo, I loaded them up in a car and we drove together. They had to go together, they want to be together and they’re going to room together, so it’s really just kind of a band of brothers.”