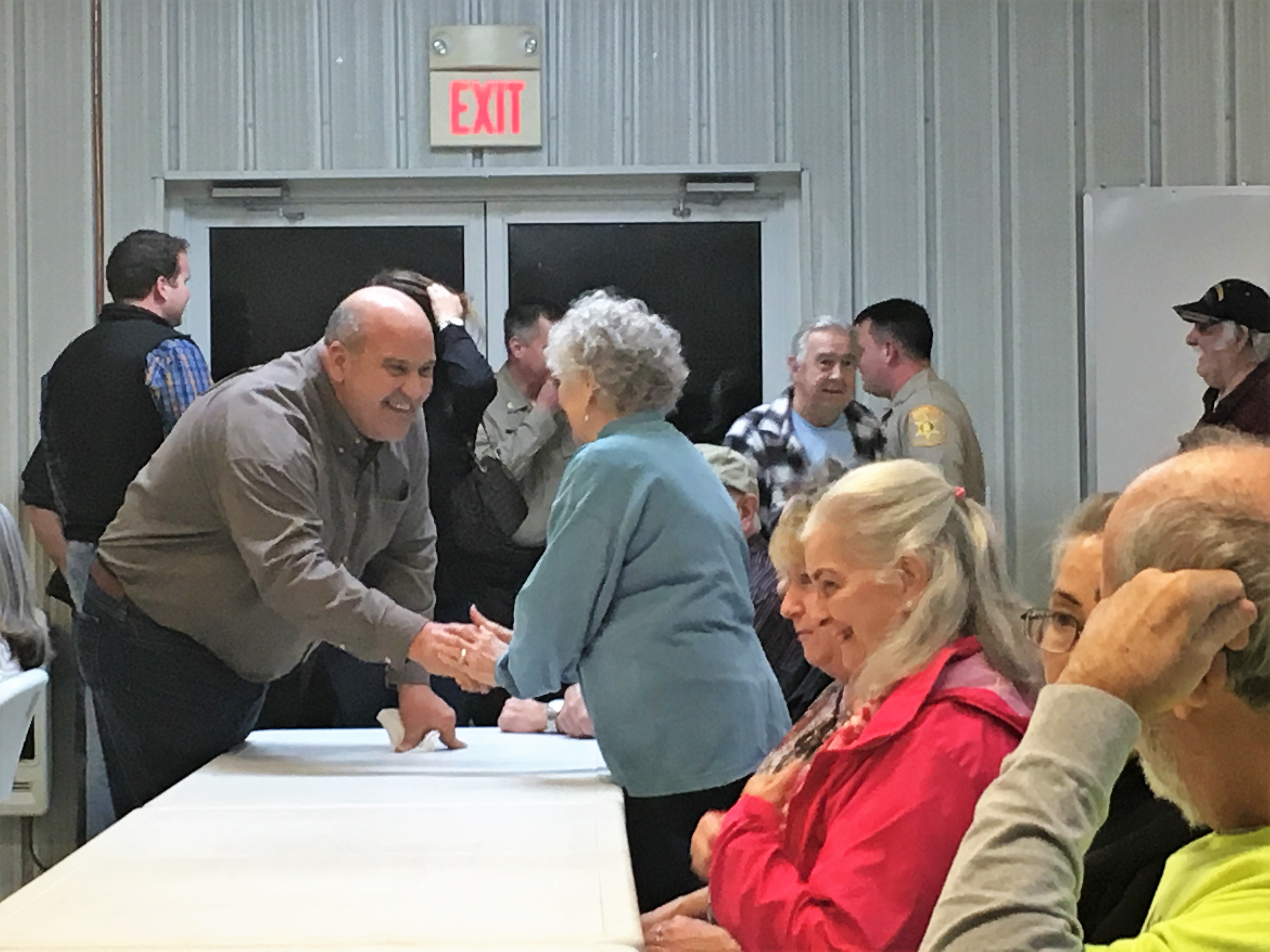 TRIMBLE – The Trimble Community Center was packed Monday night, and not just for the free pizza. Politically-minded residents turned out to hear from, and get some face time with, four of Cullman County’s elected officials.

Representative Corey Harbison, R-Good Hope; Cullman County Sheriff Matt Gentry; and Cullman County Commissioners Garry Marchman and Kerry Watson, who are all up for reelection this year, were on hand for some good, old-fashioned fellowship with their constituents.

Before the town hall meeting got underway, Harbison spoke to The Tribune about his upcoming bid for reelection and what he’s anticipating for the race.

“You know any House race can get heated. I don’t really know what I’m gearing up for, I guess it depends on if I have any opposition run against me or not. I don’t mind if I do, I hope that the people and my record will speak for myself and even if I have opposition, I hope the people are happy with me and they’ll put me back in office,” Harbison said. “Even if someone does run against me it’s not always a bad thing because every elected official needs to be kept in check. In Alabama, in the House and the Senate we come up every four years for reelection so I’m ending my first four years and if reelected I’ll be going into my second term. So, we’re just kind of waiting to see, nobody has qualified yet. I’ve hit the trail running a while ago campaigning and trying to do some fundraising and getting out, so I never stopped once I was elected trying to get out into the communities.”

Harbison provided the pizzas for the night but was worried he may have ordered too few as people continued to file into the community center. Everyone got a slice but not everyone got a chair; several folks were standing off to the sides after every seat was filled in the lead-up to hear some of their community’s elected leaders speak.

Harbison got things started after dinner by talking about some of the difficulties he and his colleagues face in Montgomery in the fallout of the political scandals that have hit Alabama in recent years.

“This is going on my fourth year in the Alabama House of Representatives and you know I’ve had some good times there, but I’ve had bad too. It’s a hard time to serve with everything going on in the state. We’ve had a cloud of corruption from the governor to the speaker of the house, and when we have those problems in any level of government, it makes the citizens have distrust in all political figures,” Harbison said. “I think we have some good elected people, but it’s just like any profession, a few bad apples spoil the whole bunch and it puts a cloud over everybody, but I think we’ve got a good group of folks in Cullman County and it’s been an honor to serve with everybody and to serve y’all the people.”

Harbison also touched on some policy issues and legislation that he is working on in Montgomery right now.

“I’ve got one piece of statewide legislation that I’ve introduced so far this year dealing with domestic violence. You know, I got to see a lot of issues firsthand when I worked as a deputy in the sheriff’s office. It is a problem, so we’re looking at increasing the minimum sentences on domestic violence second and first, when the offense occurs in front of a child,” Harbison said. “Domestic violence is bad at any time, but when you raise your kids in that atmosphere, unfortunately a lot of times some of them fall into that same routine when they become adults, so we need to do everything we can to prevent domestic violence and especially in front of children.”

Next up was Watson, who talked about his and the commission’s philosophy when it comes to handling the County’s money and some of the steps they’ve taken toward improving the community with it.

“We try to manage your money the way we manage money at home, and you can ask my wife, I’m pretty stiff with my money, so when I’m looking at tax dollars I do the same thing with the money that y’all have.” Watson said. “When we’re doing things, we look at all the avenues, and since we’ve been in office we’ve made some changes and I think they’re improvements but it’s like baby steps you know, it’s not as fast as you want to go but you’re moving in the right direction. I think we’ve finally made a turn in the right direction where we’re making some good turns.”

Watson’s fellow commissioner, Garry Marchman, followed him to the front of the room to speak next.

“I think that’s one of things that’s important about getting together like this, because we can gain a perspective from one another. We can gain a perspective about where want our county to go and my intent as a commissioner is to take your county where you want it to go because I work for you,” Marchman said. “I work for the people that elected me and put me in office and I’ve worked hard to maintain that direction. I want people to know that if they call me, I will respond to their call. I want them to know they can get in touch with me, if any of you here needs my cell phone number I’ll give it to you, and a lot of you here have got my cell phone number because I talk to a lot of you, and I don’t mind that, but if you call from 9:30 at night to about 5 in the morning, you’re probably not going to get me,” Marchman joked.

Cullman County Sheriff Matt Gentry touched on what he thinks the sheriff’s office means to the community and what the community means to him and the rest of the department.

“One of the things that we believe in is that the office of sheriff doesn’t belong to me, it doesn’t belong to the deputies, it belongs to all of us and we’re only as strong as our community is,” Gentry said. “That’s something we believe in deeply. For the last three years we’ve been able to go back out into the community and do roughly six or seven community meetings a year, which is a good thing because we’re in a social age today, everything is social media but there’s nothing better than being face to face talking to people. That’s very important for us because I could get 100 text messages a day but when you can sit down and talk to people, then you can figure out the problems and the concerns of their area and their community. We live in the greatest county in the state of Alabama and I tell the other 66 sheriffs that. There is no greater county than Cullman County and it’s because of our citizens. As tragic things have happened to law enforcement, you would not believe the support we get out in the community. People come, and they bring food and take care of us and feed us and tell us how much they appreciate us and that’s the reason I keep gaining weight because I eat all the time,” he smiled.

Gentry went on to talk about the controversy surrounding the food bill lawsuit that he and 48 other sheriffs across that state are currently involved in and tried to clear up any confusion people may have about the situation.

“You’ve probably seen a lot of stuff about the food bill. Sheriffs that have to feed inmates, and whatever’s left over at the end of the year belongs to the sheriff. I am one of 56 sheriffs that is responsible, me and my wife, it is a 1939 law, so my wife and I, Susie and I, are responsible to feed the inmates in the county jail,” Gentry said. “The day that we took office, I had to go the bank, me and my wife, and we had to borrow $25,000. And so I had to pay for the food that was left in the jail from the previous year, and I had to buy new food. I get $1.75 a day from the State, $2 a day from the City and $3 a day from the Feds. So essentially you have to feed for under $1.75 a day, you have to pay taxes on it and you have to do all this and whatever is left over at the end of the year belongs to the sheriff.”

Gentry elaborated a little further on the process of how he buys food for the Cullman County Detention Center and how the food is inspected.

“One of the things, and the reality of it is this, the reason they did that, years ago, it supplemented the low income of sheriffs around the state, but also when a sheriff runs it I do not have to abide by the bid law. I deal with a lot of our local farmers, they’ll call me and say ‘Matt, I’ve got 1,000 pounds of sweet potatoes. They may be jumbos, I’m not taking them to the market, I can sell them for half of what I would sell them for at the market,’ so we don’t have to abide by the bid law, where county commissions have to abide by the bid law. We have a dietician that comes twice a month, unannounced, and inspects the food. I can tell you a month ahead of time what’s being fed, anybody that’s been through the citizens’ academy I’ve taken you through the jail and showed the kitchen and showed you how it works, but it’s a very hot political issue. It’s an issue that I went to our county commissioners and our legislators, I don’t like it, I don’t like it at all, but I have to deal with it. It’s state law that we have to deal with it. I’ve met with them and we’re trying to work up a solution, but like I said it’s a problem that 56 out of 67 sheriffs deal with.”