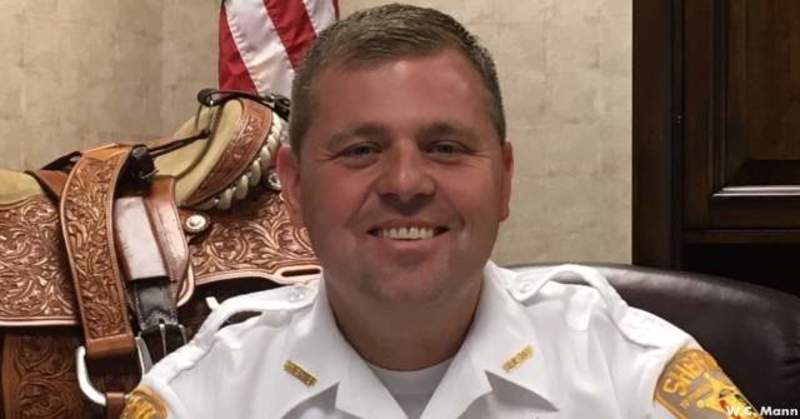 CULLMAN – Cullman County Sheriff Matt Gentry responded late Tuesday to a lawsuit filed on Friday, Jan. 5 by the Southern Center for Human Rights and Alabama Appleseed Center for Law and Justice against 49 Alabama county sheriffs, including Gentry, claiming that at least some of them are unethically generating personal profit by pocketing funds that are supposed to be used to feed their prisoners, leaving inmates with a food supply “inadequate in quantity or nutritional value, spoiled, or contaminated, such as with insect or rodent droppings, or foreign objects,” according to the wording of the lawsuit.

The two groups hope “to compel the production of certain public writings held by the 49 Defendants in their official capacities as the Sheriffs of various counties.  The Defendant Sheriffs have violated the Alabama Public Records Law by failing to disclose records showing whether–and, if so, by how much–they have personally profited by taking money for feeding inmates in their jails.”

Under a 1939 Alabama law, sheriffs are allowed to keep leftover funds after feeding their inmates. it’s a law that Gentry campaigned against when he ran for sheriff in 2014.

“All fees, commissions, percentages, allowances, charges and court costs heretofore collectible for the use of the sheriff and his deputies, excluding the allowances and amounts received for feeding prisoners, which the various sheriffs of the various counties shall be entitled to keep and retain, except in those instances where the county commission directs such allowances and amounts to be paid into the general fund of the county by proper resolution passed by said county commission of said county, shall be collected and paid into the general fund of the county.”

There have been instances in which the law has been misused.  Among others:

In 2009, Sheriff Greg Bartlett of Morgan County was dubbed “Sheriff Corndog” and was arrested after pocketing over $200,000 while feeding his prisoners twice per day from a half-trailer load of corn dogs he purchased for only $500.  The other half of the load was allegedly bought by Limestone County Sheriff Mike Blakely.
In 2017, Bartlett’s replacement, Sheriff Ana Franklin, was fined $1,000 for contempt of court after loaning a used car dealer $150,000 from her jail’s food fund.  She repaid the money.

In some cases, though, sheriffs might even operate at a loss in one year or another.  They are allotted only $1.75 per day per prisoner from the state for food, and $3 per federal prisoner, and must find other sources for excess costs.

In response to the lawsuit, Gentry provided the following statement to The Tribune:

(On) Friday January 5, 2018, two groups, the Southern Center for Human Rights, and the Alabama Appleseed Center for Law and Justice, filed a lawsuit in state court.  This lawsuit, which asserts allegations surrounding what is commonly known as the “jail food money,” involves 49 Alabama sheriffs.  Under a 1939 Alabama law, sheriffs are able to keep any excess money not spent on jail food.  I stated when I ran for sheriff in 2014 that I did not agree with this law then and I continue to say today I disagree with this law.

I said on many occasions during the 2014 campaign that I would run the Jail Food Account differently and I would also try to get this law changed so that we have a different system to operate under and that is what we have done.

First, as sheriff, we fed over 4,500 individuals in the county at community events over the last three years such as neighborhood watch(es), community meetings, senior citizens meetings, veterans groups, church groups, and many others, which all function as a way to bring our communities, county and sheriff’s office together.

Second, I am continuing to work with our local legislative delegation; Senator Paul Bussman, Rep. Corey Harbison, Rep. Randall Shedd, and Rep. Ed. Henry for a local bill. A local bill, if passed, would apply to Cullman County as other counties have done and remove the Jail Food from being a personal account from the sheriff. I hope we can place the local amendment on the ballot in 2018.

Third, I have always had an open-door policy and anytime citizens need to speak with me I try to always be available. I have also spoken to thousands of citizens during my time as sheriff about the jail food issue whether they were in the Cullman County Sheriff’s Citizens’ Academy, touring the jail with a college, high school or part of the court system, or at an event I spoke (at).

As (the) political season approaches I ask the citizens of Cullman County not to believe the outside groups who parachute in, sue, and throw around accusations. I hope people will call me, email me or come to my office with any questions.

This is an ongoing story.  Watch for updates.