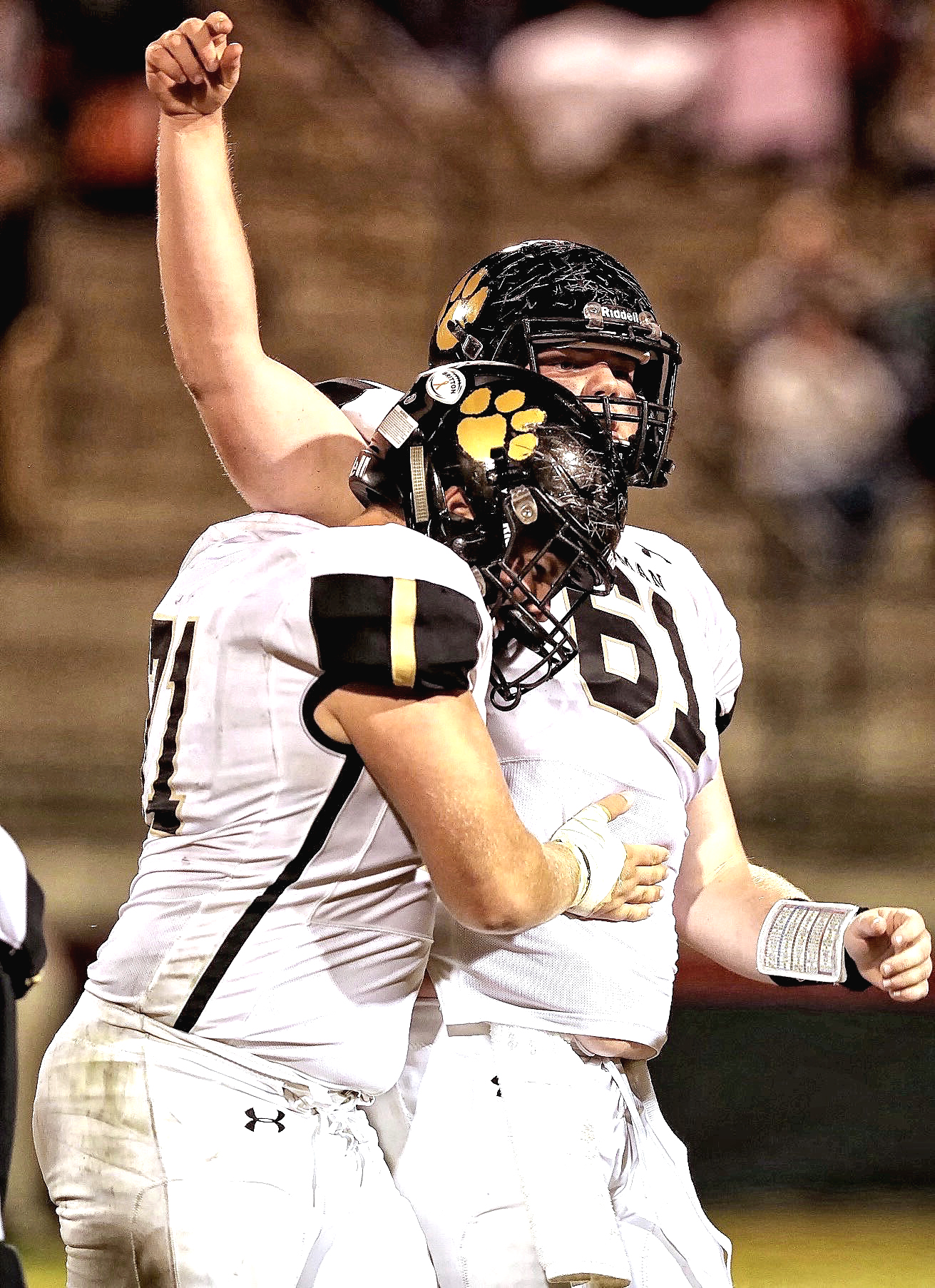 CULLMAN – The Cullman Bearcats have developed a tradition for elite offensive linemen and senior Tyler Nunnelley is the latest product. Nunnelley was a four-year starter on the offensive front for Cullman and capped off his high school career by signing a scholarship to play for Eastern Kentucky next fall.

Nunnelley said he’s been working to earn a spot amongst past Bearcat greats for as long as he can remember.

“That’s been my goal since I was 6 years old,” he shared. “I’ve been working out at ASPT with Coach Steve Johnson since I was 6 and he’s really helped me. My parents really pushed me to the limit and I thank them for it because there were some days I just didn’t want to go but they told me it would pay off in the end and it’s starting to now. It’s very special to get mentioned with those names of offensive linemen like Daniel Hunter last year. He really made me better; we went after it at practice and it’s just great to be mentioned with those guys who have played here.”

Nunnelley attributes a lot of his success and development to his coaches he worked with at Cullman. He feels that his coaches did a lot to prepare him both physically and mentally for Friday nights as well as the next level.

“We watched a lot of game film together, that’s really what we did and worked a lot on footwork,” Nunnelley said. “Coach Brandon Dingler has really helped me and we also had another coach, Coach Jonlee Sasser has been working with us for two years. Coach Dingler has been there for all four of my years and it was hard as a freshman. Everyone was so much bigger than me, and he just kind of kept my head on straight and has been a huge help to me over the years. I love Coach Britton too, he’s helped me a lot in my recruiting and really just teaching me to be a better person. We have a great relationship and even when I was really young I knew Coach Britton. He hunted and everything, so I’ve known him for a while and I really appreciate everything that he’s done for me.”

Nunnelley is confident that his transition to Eastern Kentucky will go smoothly from a schematic standpoint. The offensive style is very similar to what he has been playing for four years as a Bearcat, so he’s excited to start competing for a spot up front after graduation.

“I think I should be able to translate pretty well. Our offense is a good bit like Eastern’s. I think they go under center a little bit but not a lot and they do a lot of wide zone which is what we run at Cullman. I’ve been watching some of their film and when I went up for my visit my offensive line coach put together some clips of our plays and their plays and they come together a lot. It’s going to be a huge jump for me and I’m going to have to get a lot better, but it helps that we already do some of the stuff that I’ll have to do in college. After I committed I went up to their camp because I hadn’t been to one and I just wanted to move around and do some drills and I got to meet a lot of people, so it was really good. I went on my official visit a few weeks ago, and I was going to play there anyway, but that visit really sealed the deal because I got to meet a lot of players and all the coaches so I’m excited.”

Nunnelley reflected on how his time at Cullman prepared him to play at the collegiate level and talked about some of his favorite memories on the field.

“The coaching staff really stayed on me to keep working and polish my game and stuff like that. We also watched a lot of game film and this year we lost Daniel Hunter and some other guys, so they asked me to step up and be a leader and I appreciated that and thought it was a good thing for me,” he smiled. “We had fun, it was a good senior year and I wish we’d made it a little further, but we had a good year. The difference between freshman and senior year is huge so the coaches did a lot to help me mentally. My sophomore year we beat Austin and that year they actually went to the semi-finals and got beat by Clay-Chalkville I think. They were beating us at halftime by a couple touchdowns and we came back and won it and that was awesome, that was a good memory. Another memory was this year when we beat Fort Payne after Coach Britton announced his retirement; that was really big because we wanted to win it for him. This was also our best year since we’ve been in 6A so that felt good.”

Nunnelley’s Bearcat football days may be wrapped up, but he’s still got some playing time left at Cullman. He’s getting ready to join up with Coach Brent Patterson and the Cullman baseball team this spring, so the All-State lineman will get to swing the bat a little before starting his career as a Colonel next fall.