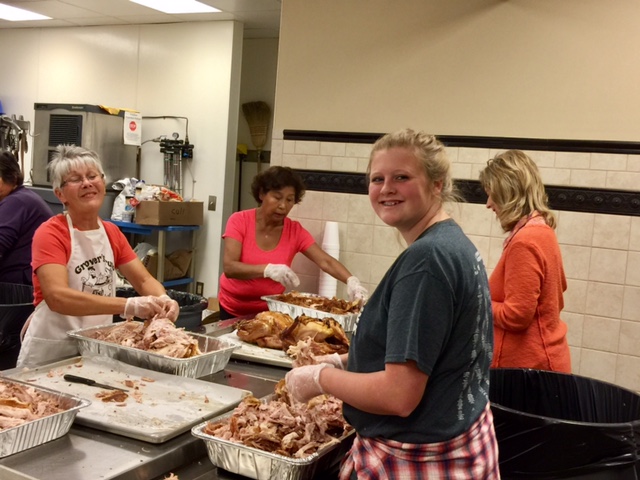 CULLMAN – For 23 years, the people of Cullman have been guaranteed a hot meal and the company of caring people on Thanksgiving Day, thanks to the Cullman Ministerial Association and a charitable visionary named Grover Reeves.

Reeves approached the organization of area ministers with the idea of a community meal around Thanksgiving, for people who could not afford to prepare a full meal.  Concern over the potential number of local residents who might not have family with whom to spend the holiday led to the placement of the dinner on Thanksgiving Day.  On that day in 1994, local churches came together at First Baptist Church in Cullman for the first installment of what would become the Grover Reeves Community Thanksgiving Meal.

Fast forward to 2017: after 23 years and more than 20,000 meals served, the community meal continues to grow steadily.  Due to increasing numbers, the event outgrew First Baptist and in 2016 was relocated to St. John’s Evangelical Protestant Church at 512 Second Ave. SE, whose facilities could better meet the larger need.  Over the last few years, an average of more than 1,000 people annually have received meals, including dine-in visitors, emergency responders and dispatchers, law enforcement officers, residents at the Foundry Farm, and inmates at the County Detention Center, as well as numerous area homebound residents whose meals are delivered by event volunteers.

Grover Reeves passed away before last year’s meal, but memories of him just seemed to increase enthusiasm for service among volunteers.  The 2016 dinner was planned for 1,000-1,200 plates, but according to St. John’s Administrative Assistant Karen Hassell, who is helping coordinate resources for the event, the church is looking to serve up to 1,500 dinners this time around, including both delivered meals and dine-ins.

Around 100 volunteers from St. John’s alone have already begun preparation, or committed to working Thursday.  The total number of those who will be helping is not yet known, but 58 volunteers from over 20 other churches and local civic groups bolstered the host church’s own numbers last year.

“We have an assortment from the city and county that come together,” said Hassell.  “We don’t ever really know how many’s coming from different churches until Thursday morning, when we all show up.”

Some of those volunteers will be delivering meals to numerous recipients around the city and county, including Hospice patients and families, homebound residents, emergency responders and law enforcement officers, the Cullman County Detention Center, Foundry Farm, Pilot Light Home and Daystar House.  Deliveries to members of the community’s Hispanic population are being coordinated with Pastor Raul Dominguez of First United Methodist Church.

The menu for this year includes turkey, chicken and dressing, green beans, sweet potato casserole, cranberry sauce, and what Hassell described as “lots of delicious homemade pound cakes!”  St. John’s has long been in charge of the pound cakes and, three days before the event, had already received 125 of the desserts with more expected by Thursday.

Reservations for delivery required by noon Tuesday; walk-in diners on Thursday do not require reservations.