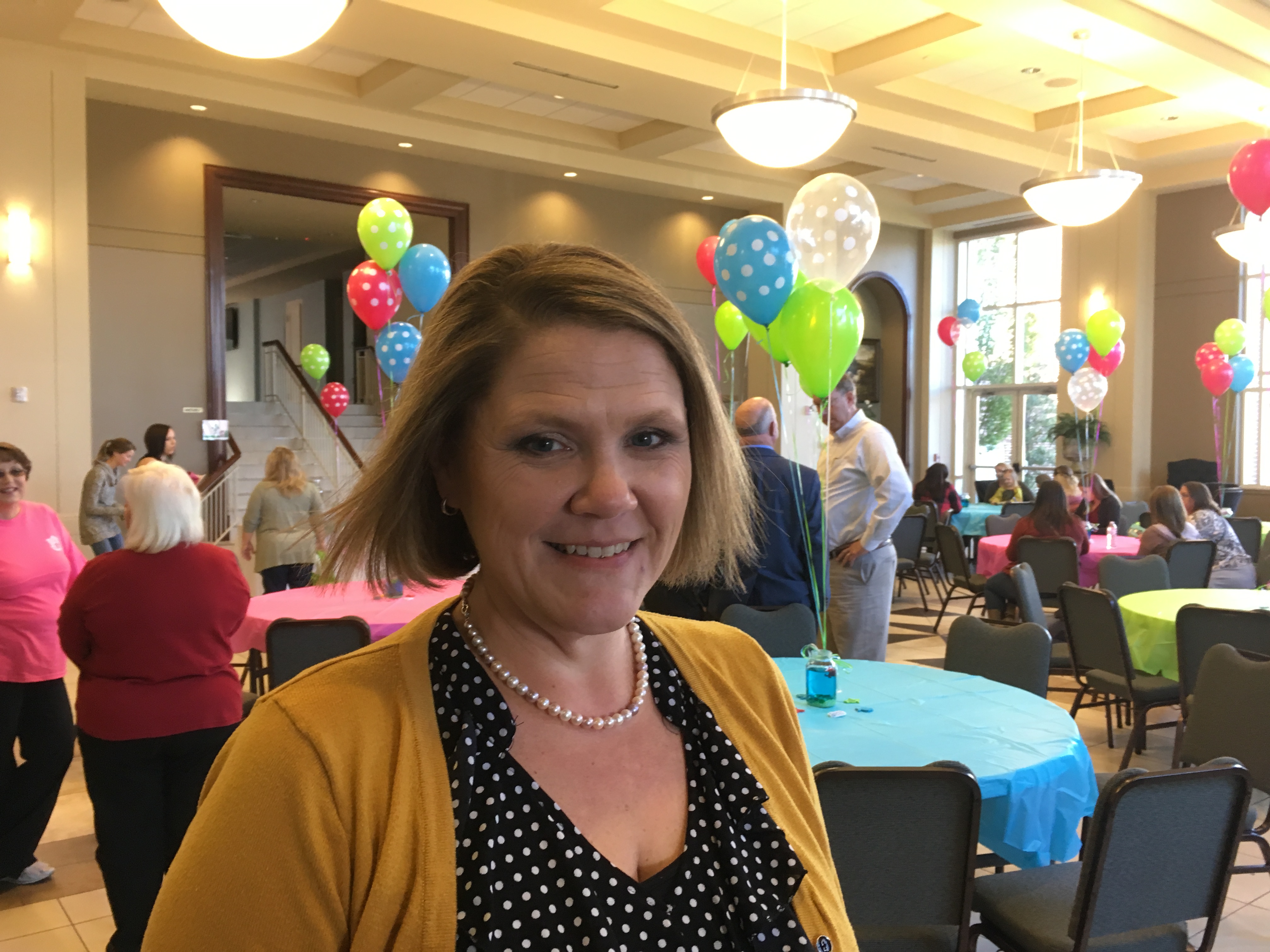 Amy Smith, Cullman County DHR director, said, “It is our position at Cullman County DHR that NO child should be deemed unadoptable, and that there is a forever family made for every single child in foster care with a plan of adoption.”  / W.C. Mann

DHR Program Supervisor for Foster Care and Adoption Resources, Amanda Buchanan told The Tribune that, in a typical year, the county DHR will see around 14 children adopted.

Beyond the official count, the agency assisted with two other adoptions in Mississippi, and DHR staffers themselves adopted six children over the last year.

County DHR Director Amy Smith told the group, “It is our position at Cullman County DHR that NO child should be deemed unadoptable, and that there is a forever family made for every single child in foster care with a plan of adoption.

“In Cullman County alone in 2017, we have identified and secured forever families for siblings we were told would never be able to live together, a beautiful little girl with many medical and developmental needs that render her wheelchair bound, a unique and beautiful 16-year-old with behavioral issues–I mean, what 16-year-old doesn’t have ‘behavior issues,’ right?  I know I did!

“All of those are descriptors of children that I, personally, have also heard described as ‘unadoptable.’  In 2017 and in the future, we will describe those children as just that: CHILDREN- children who deserve families, roots, connections and love- forever families!”

–At any given time, there are around 300 children in foster care in Alabama who are ready for adoption, but with no family to go to.  Cullman County currently has 51 children waiting.

–The average child awaiting adoption is 8 years old, and will wait three years to be adopted.

–Each year, 22,000 children “age out” of the foster care system, reaching adulthood with no families or support of their own.

–A child that ages out of foster care stands a much higher chance of negative outcomes, including substance abuse, poverty, homelessness, unwed pregnancy, incarceration and premature death.

Smith told The Tribune that Cullman County currently has around 200 children in foster care, with 51 of those waiting to be adopted.  Of the other roughly 75 percent, many will eventually return home, or at least to members of their families.

“In the last year, we also had over 70 children reunified either with family, or with relatives,” added Buchanan.

Smith talked to The Tribune about what leads children into foster care. “We’re seeing a lot more children entering care, lately.  I think there’s a strain in resources, with other state agencies- juvenile probation, mental health.  We’re seeing lots and lots of kids, younger and younger, with severe mental health issues.  Parents may want to be able to meet their needs at home, but just can’t; say there’s other kids in the home who are at risk, or the children are at risk due to their (parents’) own issues.  We’re seeing a lot of that.  And, to be completely honest, tons and tons of drug use that’s resulting in kids entering foster care because their parents aren’t able to take care of them.”

Gentry, whose office has to deal face-to-face with many of those situations that send kids to foster care, addressed the crowd. “I have a very near and dear place on my heart for children.  It gives me joy and happiness to see so many kids that are being loved in here today.  And that’s really what it’s about. There’s so many times that communities lose focus on what’s important, and children are our greatest resource.  Our children are who will make a difference in this world.  And being with them and showing them love teaches them how to show love when they grow up.”

Chaney shared, “We’re fortunate to live in such a tremendous community that values children . . . Everything that we see, everything that we read says that a safe, secure, loving, stable home is the most important thing we can do to help our children.  There are 34 children now in Cullman County that have that. You can’t put a price on that.  And while we’re happy with that success, I know this director and this staff is not going to be happy until we have a place for every child that needs help.”

“We’ve got a lot of really good staff who work really hard to make sure that kids, if they can’t be with their birth family, that they have permanent forever families,” said Smith. “They’ve done a lot of hard work this year to get there.”

During the celebration Smith addressed her staff, “I tell you often, but I have worked in and with other counties, yet I have never encountered a group of more selfless people, people who are united as a team to achieve that sole goal of changing this world one kid at a time.  I’m privileged to know each one of you professionally and personally. I know your hearts, and your dedication to our kids. You have my respect, and I thank you.”

To the adopting families, Smith said, “Thank you for taking a chance.  Thank you for not being afraid you’ll get too attached.  Thank you for knowing that attachment is exactly what our kids need.  Thank you for holding us accountable as an agency, and most of all for advocating for our kids in only ways that foster and adoptive parents can . . . But most of all, thank you for opening your hearts and homes to help us make certain that every child is adoptable.”

Smith shared with the crowd the motto of the adoption-supportive Dave Thomas Foundation: “Unadoptable is Unacceptable.”

Both Smith and Buchanan encouraged families considering fostering or adoption to contact families already involved.  For more information, or to be placed in touch with foster/adoptive parents, call DHR at 256-737-5300 and ask to speak to someone in the resource or licensing units.  Information on foster care and adoption can also be found at http://dhr.alabama.gov.