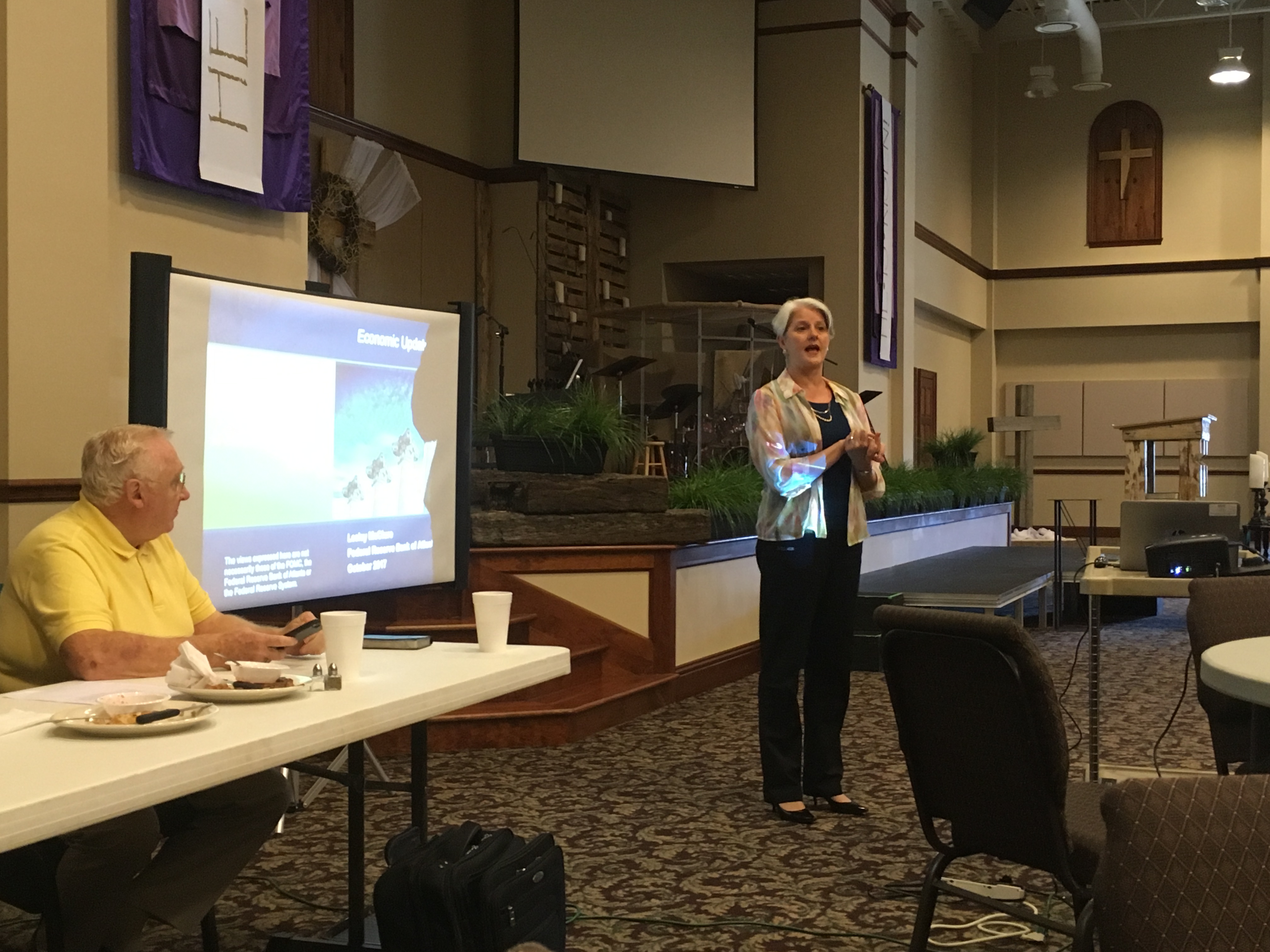 Leslie McClure describes the functions of the Federal Reserve at a meeting of the Cullman Kiwanis Club on Monday, Oct. 16, 2017. / W.C. Mann

CULLMAN – On Monday, Oct. 16, Cullman Kiwanis Club members had the opportunity to hear about the work of the United States Federal Reserve from Leslie McClure, the regional executive senior officer of the Birmingham office of the Federal Reserve Bank of Atlanta.  The Atlanta bank, representing the southeastern states, is one of 12 around the country that make up the Federal Reserve (often referred to as “the Fed”).

McClure explained that the Fed performs three primary functions: bank supervision – regulation of policies and procedures of banks and banking systems; payment services to financial institutions – managing the flow of money from one entity to another when payments are made by check, or through direct deposit programs.  The Fed also oversees security for these types of systems; and monetary policy – controlling the price of credit to raise or lower interest rates, so as to stimulate a weak economy or reign in an economy growing out of control.

The Fed, McClure explained, is run by a leadership structure that is set in place for substantially longer terms than elected federal officials, making it much more difficult for those leaders to be controlled by one administration or another.  That structure is spread across 12 reserve banks nationwide, so that the Fed’s policies will take into account the economic situations of every portion of the country, not just financial centers like Washington or New York.

McClure shared her thoughts about the current U.S. economy, stating that it appears strong now and is moving steadily in a positive direction.

She said, “We’re in a situation now where the economy is growing slow and steady.  We’ve had extraordinarily low interest rates for many, many years since the financial crisis (2008-2010).  We have begun raising those back in late 2015, but they’re still at a level that we would consider stimulative.

“At the most recent FOMC (Federal Open Market Committee) meeting, the governors pointed out that the labor market has continued to strengthen.  Economic activity has continued to rise moderately, not wild growth, not contraction, just kind of good, moderate, stable growth.  Job gains have been very solid, with the exception of September–which we know was impacted by the storms, so you kind of take that with a grain of salt.  Household spending has been expanding moderately, and overall inflation is actually running a little lower than the goal we have, which would be between two percent and three.”

Of the current job market, McClure noted that, while employment rates are up, the percentage of the population in the workforce has declined.  This is due largely to increasing numbers of baby boomers retiring, and is resulting in many businesses struggling to find employees.  Additionally, while the unemployment rate is around four percent, many of those who are working are doing so in part-time jobs that do not provide them with good incomes.  Including both the unemployed and those who are “underemployed,” the number of those who have struggled to find a good place in the workforce is actually around eight percent, according to McClure.

Over the last year, even including the weather-driven slowdown in September, the U.S. has averaged 148,000 new jobs (more people entering the workforce than leaving) per month.

The local chapter of Kiwanis International meets for a fellowship lunch at noon each Monday in Christ Hall at St. John’s Evangelical Protestant Church, and hosts speakers on many various topics, along with occasional entertainment.  For more information, visit www.facebook.com/cullmankiwanis.