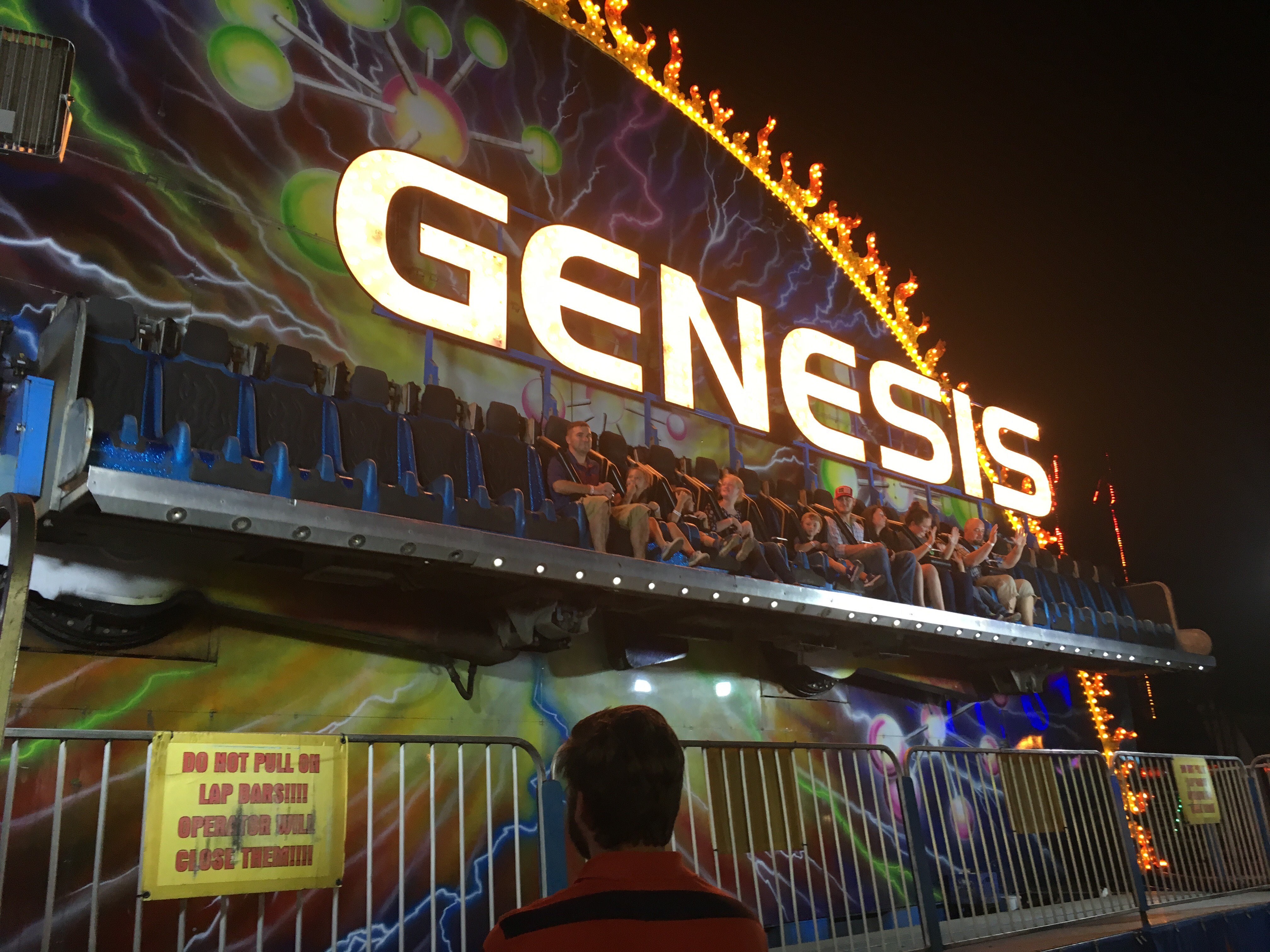 Connor Milligan waits for his turn on The Genesis. / Nick Griffin

CULLMAN – The Cullman County Fair opened its gates Thursday night and, as usual, there are several fun rides for guests to enjoy, ranging from traditional bumper cars for kids to terrifying thrill rides like The Zipper and The Kamikaze.

For this year’s festivities, local Cullman High School alumnus Connor Milligan acted as The Tribune’s ratings specialist, testing each ride and reporting back with his ratings, 1-5 in the categories of fear, thrills and sickness.

The first ride on the list was The Genesis. Milligan came off of the ride really enjoying it and with a mostly accurate prediction of what his final ratings would be. He rated the fear level at a 2, the thrill level at 3, but found the sickness level higher than he predicted, at a strong 5.

Next up was the high-speed spinning attraction, The Starship. Milligan left the spinner with an adamant 5 on both fear and sickness and a 4 on the thrill scale. It’s safe to say The Starship is one of the more intense experiences at this year’s fair.

He hit The Kamikaze next, and it exceeded all of Milligan’s predictions. After experiencing the high-speed drops and flips, Milligan came away with a 3 on the thrill scale and 5s in both the fear and sickness categories. The Kamikaze is not for the faint of heart and promises another intense experience.

The next stop was The Star Flyer. The high-altitude swings look mundane from the ground but Milligan found it was a bit more than he expected. After predicting a 1 in the sickness column, he walked away with a 5 on the sickness meter. “You spin around a whole lot up there,” Milligan said. He also gave both the fear and thrill categories a solid 4.

Nearing the end of the attraction tour, Milligan got in line for The Zipper. Milligan predicted a full score across the board with 5s in fear and thrill and even pushed the boundaries in the sickness column asking if he could predict a 6. Coming off the ride, he felt he nailed his predictions, even sticking with his 6 rating on sickness. “I nailed it. 6 on the sickness factor, 5 on fear and 5 on thrill.” Milligan said. “This one is pretty intense!”.

The last stop on the tour of this year’s main attractions was The OMG. This ride swings its passengers back and forth with maximum momentum, to really move riders’ stomachs. Milligan proclaimed The OMG his favorite, siting the excellent ratio of fear and thrills compared to sickness. Milligan placed a 4 in both the fear and thrill slots and just a 2 in the sickness area. “It was great, that’s my favorite one so far,” Milligan said. “It was a great fear to sickness ratio.”

After completing his circuit of thrilling rides, Milligan said his is confident that this year’s Cullman County Fair has a ride for everyone who enjoys stomach turners, high-speed thrillers or terrifying heights and flips.