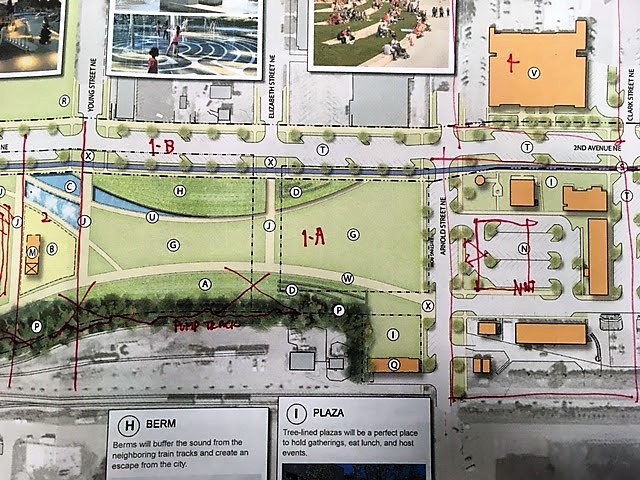 If approved, a renovation of the current Depot Park (hand-marked 1-A on the designer’s concept map) and Second Avenue Northeast (hand-marked 1-B) will be the first phase of a 20-year plan.  A wide walking path (W) will be large and strong enough to support emergency response vehicles and food trucks.  Berms (A, H) will buffer train and car noise to help make the park a quieter space.  The renovated Second Avenue streetscape will substantially increase downtown parking.

CULLMAN – On Monday evening, before the Cullman City Council’s regular meeting, the council and City of Cullman Urban Renewal and Community Development Commission met with Tony Renta of Renta Urban Land Design to talk about ideas for the future of Depot Park.

“Really what it is,” Renta explained to The Tribune after the meeting, “is the existing Depot Park is going to grow substantially.  The first phase of it is only going to grow north up to Young Street; it’s not going to include everything you see on this plan. So, it’s really going to go from Arnold Street to the existing police station, which right now is Depot Park and a gravel parking lot from the old industrial building that was removed.

“So what we’re going to do is we’re going to absorb that gravel parking area, use the topography on the site to create some berms.  That’s some environmental cleanup; in essence, it’ll feel like you’re sinking the park, but really, we’re building up the edges around it, so we can buffer some of the noise outside from the railroad and from the street, to create what we’re calling the Grand Lawn.  It’s a big, open common space that could be used for multiple events.”

The plan includes a wide walking path roughly parallel to the railroad track, that will be built robustly enough to support emergency response vehicles moving into and through the park.  The path is designed for numerous uses.

According to Renta, “It’ll also be used for all the functions, for Strawberry Festival and everything else that happens downtown.  That road/path can double as almost like a venue space to park food trucks, kiosks for local goods or anything else, for an expansion of the local farmers’ market, so when we have larger civic events, that’s a place for them to set up.”

In addition to the park expansion, Renta’s plans include changes to the Second Avenue Northeast streetscape through the area during the first phase of development, explaining, “We want to renovate Second Avenue and put on-street parking on the east and west side of it, all the way down, which is what’s consistent with what happens with the rest of downtown.”

The concept map, including all proposed phases, shows development of between 17 and 18 acres of land; that would necessitate relocation of the Cullman Police Department and other nearby City facilities.  The final design could include an amphitheater, 40-plus unit RV parking, a pump track for off-road bicyclists, bike path along Second Avenue, multiple water features and splash pads, a large playground, and a centrally-located skate park that could be developed early in the northward expansion.

Renta, along with Cullman Economic Development Agency Director Dale Greer, cautioned that the plans and maps are, at this time, conceptual only.  The meeting between Renta and the council was simply a presentation and discussion; no votes were taken.  The proposed project has not received approval or any funding.

Greer pointed out that, if all phases of the plan are approved, the project could take 20 years to complete.

According to Renta, “It’s a work in progress; it’s a master plan.  Those phase lines can move, and often change.”