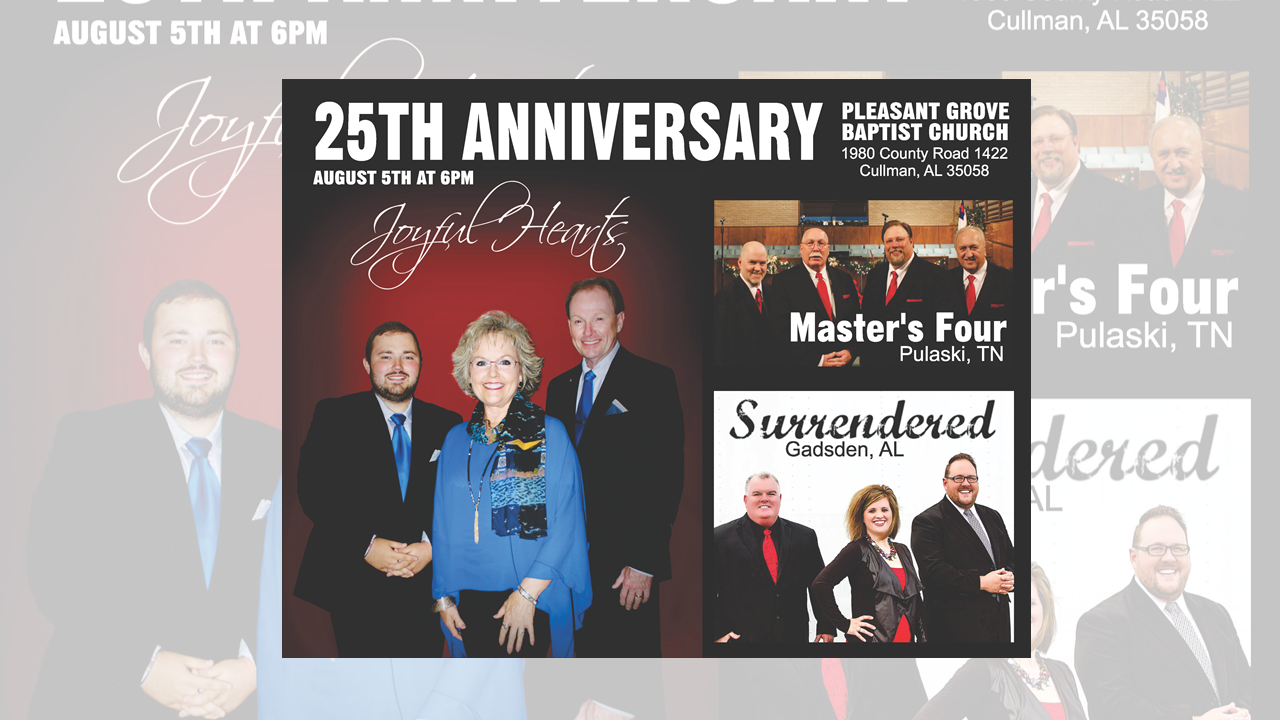 CULLMAN – The rafters out at Pleasant Grove Baptist Church will probably vibrate a little on August 5, thankfully not from another tornado, but from the Joyful Hearts 25th Homecoming Gospel Singing.

In addition to the Joyful Hearts, the Master’s Four Quartet from Pulaski, Tennessee, and Surrendered from Gadsden, Alabama, will be taking the stage at Pleasant Grove.

Admission is free, and a love offering for both the traveling groups will be received.

Cullman’s Brenda Foxx, who is a member of the Joyful Hearts (along with Donnie Foxx and David Bates), invites everyone to attend this event, noting that the tradition of Southern gospel music is still strong in this region, and encouraging everyone to come and be a part of this extraordinary musical event.

Back in the horse and buggy days, small towns and cities across the region were filled with visitors who came to hear revival preachers, eat dinner on the grounds and listen to this music which comes from the hills of the Appalachians, its roots from Scotland and Ireland. These singings took place, not only in churches, but in courthouses and high school gyms and even in tents pitched in the fields of a friendly farmer. The singings sometimes lasted for three or four days. People came from great distances, with lunches packed, and prepared to stay until the last note faded away.

This homecoming promises to be just as well attended, although the parking lot will be full of cars and trucks instead of wagons and other horse-drawn conveyances.

If you are of the older generation, you have probably heard Southern gospel music sung in many of the local churches in by-gone days. According to Foxx, she first heard this compelling music at home when she was a very young child from her grandmother’s (Louella Skinner) radio and from her father, Junior Lawrence, who sang harmony and high tenor and picked guitar. Foxx inherited his gift. Not only is she a multi-faceted singer, but she is also a composer and will be sharing some of her own compositions at the homecoming. Other, more familiar songs often include audience participation; “What a Beautiful Day” and “What A Happy Time”, among others, are often requested songs from the past.

This form of music might have escaped the attention of the younger generation in favor of hip hop, contemporary, and electronically generated music.

However, the younger generation should know that it was Southern gospel that gave birth to many other forms of singing and songwriting over the past century.  Singers Jerry Lee Lewis and Elvis Presley would have had a great deal of exposure to Southern gospel music, having attended churches in the rural South where it has retained one of its purest, unadulterated forms, in part because of the area’s small churches, some of them very isolated from outside influences. Rock-and-roll, soul and many other forms of music came directly from the influence of Southern gospel music.

This was the music of the coal mines of Kentucky, the cotton fields of Alabama, the sugarcane plantations of Louisiana and the low country marshes of Georgia and South Carolina. You would have heard it coming through the open windows of little white clapboard churches in West Virginia, and it would have been a familiar sound in the turn-of-the-century Mississippi Delta and the Appalachian Mountains of Tennessee. It knows no denomination, race, creed or social status.

If you know what to listen for, you can hear remnants of a form of Southern gospel called, “Sacred Harp” music in many hit songs played on today’s radio. A group of Sacred Harp singers preformed two of the songs in the 1990s movie “Cold Mountain” starring Nicole Kidman, Renee’ Zellweger, Jude Law and Lucas Black. Buell Cobb, of Cullman County, was among that group of singers. According to Foxx, the Joyful Hearts and other groups still break off into a capella choruses of their songs.

“People who come to hear us, especially older people, love to sing along with us,” said Foxx.

It is due to movies like “Oh, Brother, Where Art Thou?” and “Cold Mountain,” that a renewed interest in the genre has exposed a new generation to the haunting beauty of the words and the homespun sound of banjos, dulcimers and steel guitars.

If you are curious about where the roots of traditional Southern gospel and country music got their start, you will want a seat in the audience on August 5, as these talented gospel singers and musicians take the stage to honor the Lord in song.

As long as there are events like this homecoming, the heritage of Southern gospel will continue to expose people of all generations to a form of music that not only entertains, but carries a message in song about redemption, and salvation.

Lines like “I’m kind of homesick for a country, to which I’ve never been before,” by Squire Parsons, or, “Go rest high on that mountain, boy, your work on earth is done,” (Vince Gill) have brought tears to the eyes of the hardest of souls, causing them to make their way down aisles in tent meetings, revivals and Sunday morning worship in churches and even at funerals all across the Southeast for years.

Come out and fellowship with people who love Southern gospel and visit with the Joyful Hearts, the Master’s Four and Surrendered, on August 5, and renew your heart and your soul.

(Just off the Eva Road)