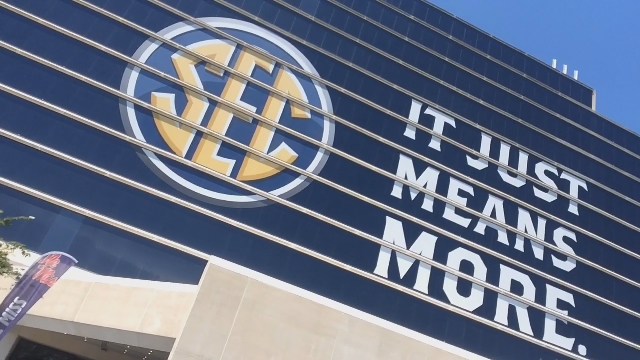 Each came to Media Days with a certain persona heading into the new season. Bret Bielema has become the most popular coach in the SEC in providing interesting quotes, joining the elite ranks of former coaches Steve Spurrier, Lou Holtz and Les Miles.

Ed Oregron of LSU returns to the summertime format for the first time since 2007 when he was head coach at Ole Miss. Oregron provided the Tigers a lift after a 2-2 start when he was promoted to the head position, following the firing of Miles when LSU lost to Auburn 18-13 on Sept. 24.

Butch Jones at Tennessee is trying to keep his team in title contention for the East division. The Volunteers were expected by many to claim the division crown last season, but underachieved with a mid-season slump after they began conference play 2-0 and sat atop the standings.

The Razorbacks, Tigers and Vols have gone through a great deal in the off-season, eager to reverse the fortunes from 2016 into better times for the entire 2017 season.

Losing four of their last six games, beginning with a 56-3 letdown at Auburn, the Razorbacks are looking to move forward in Bielema's fifth season in Fayetteville.

Seven starters return on offense, including quarterback Austin Allen and running back Rawleigh Williams. Hayden Johnson is the lone receiver with playing experience as depth will have to be created from the other wide outs.

The defense will consist of five returnees, led by all coming back in the secondary. The concern will be new faces up front and at two linebacker positions.

Bielema had to mix business with very good pleasure. He became a father over the weekend when his wife Jen gave birth to Briella Nicole Bielema at 4:44 a.m. Saturday.

"This is wave of emotions," Bielema said at Media Days. "I could never stop looking at her. I have two beautiful women in my life to look at. I was trying to downplay it. I have worked on separating my personal life and my work life."

In looking ahead to 2017 challenges for the Razorbacks, Bielema said, "We're going to concentrate more on what we need to do more in the second half to win games. Not what need to do not to lose."

When Athletic Director Joe Alleva broke ties with Miles four games into last season, Oregron calmly moved to the lead row and LSU finished strong, winning six of eight, with an impressive 29-9 rout of Louisville in the Citrus Bowl.

Alleva removed the tag of interim to permanent coach in the off-season, with the Tigers going through the process to inch closer to the top of the West Division, a position that has been controlled regularly by LSU's arch rival, Alabama.

The Tigers present running back Derrius Guice to anchor the attack, along with quarterback Danny Etling. The Tigers welcomed Matt Canada as the new OC, hoping they can create more balance than last season and previous years by running the ball more.

Three starters are back on the offensive line, featuring senior K.J. Malone. New starters are to be put at wide receiver, tight end and fullback.

Only four are returning starters on defense. A concern is down lineman Arden Buck, who missed spring practice due to personal issues. Donte Jackson and John Battle are experienced in the secondary.

"We're excited about the upcoming season," Orgeron said. "Matt Canada runs a very diverse offense, with the use of personnel, makes it difficult to defend. We want to be 50 percent offense, 50 percent defense. Our new offensive staff did a tremendous job in the spring.

"We have one of the best running backs in the country in Derrius Guice. He has great character and is a team leader. We are going to take it one game at a time. We go out there and compete. Compete at the highest level, which we play in the SEC.

"I don't feel the pressure; it's out there, we need to win."

From an experienced team at the skill positions, the Vols are having to restock the talent asle. Replacing QB Josh Dobbs is the first major task for Jones after Dobbs established school scoring records in his senior campaign.

Quinten Dormady came out of spring as the leader, but will be very different behind center than Dobbs. The Vols also have to replace Alvin Kamara and Jalen Hurd from the backfield, plus Josh Malone as a receiver.

Defensively, the Vols have a healthy Darrin Kirkland at middle linebacker, after he spent a great period of time on the sidelines from an ankle injury. Six starters in total come back to Knoxville, with depth in the secondary.

"We are redefining ourselves," Jones said Monday. "We are getting stronger. We have to get healthy. We have to play team defense, get bigger, stronger, better.

"We are proud of how far we have come in four years. We have had two straight 9-win seasons. The expectations are much greater. Our fans want it, we want it."

Jones called incoming offensive lineman Trey Smith a difference maker, even though he is just 17 years old. "He has elevated toughness in the room. He is mature beyond his years. A person of great character who has earned the respect of his coaches and teammates."

Coming up Tuesday at Media Days: