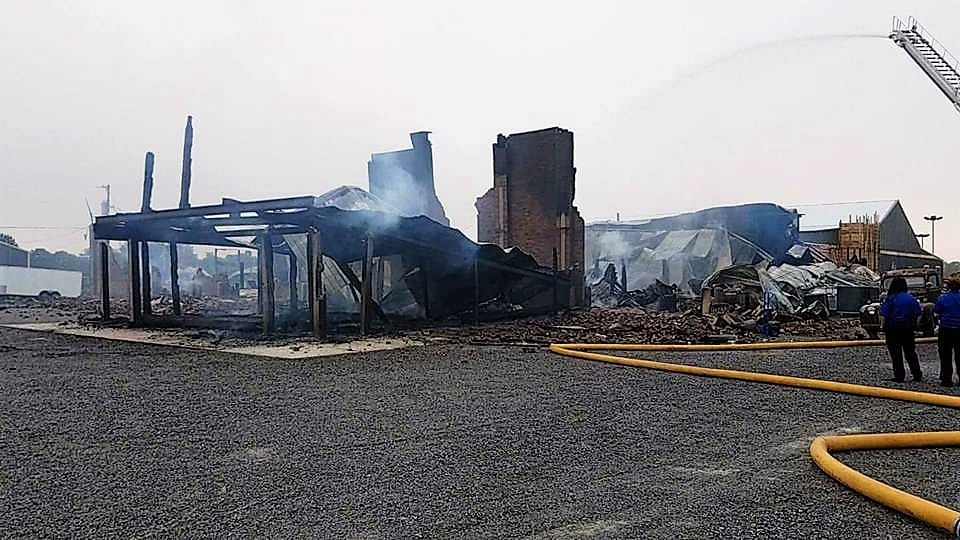 CULLMAN – A portion of wedding and event venue Brick Haven has been declared a total loss following an early morning fire, according to Jeff Byars, with the Bethsadia Volunteer Fire Department. The Cullman Tribune broke the sad news first around 2:30 a.m. Saturday morning that multiple firefighting units were on the scene of the fully involved blaze at 1889 U.S. Highway 278 West.

"We got the call right around 1 a.m.," said Byars. "You could see the fire at the front of the building, but it was further into the building than what it first appeared."

Brick Haven consists of the main front building, where a wedding was held just last night; that building is connected by a breezeway to a new building in the back, which is still under construction. The front building burned to the ground, but firefighters were able to save the new building.

Called in to help Bethsadia were the Logan, Good Hope, Trimble, Vinemont and West Point Volunteer Fire Departments, along with Cullman Fire Rescue.

Logan Fire Chief Toby Bates says he arrived on the scene around 1:30 a.m. "The front building totally collapsed, the front entranceway, everything, all the bricks. They had so much wood in there. That stuff creates a lot of heat. There was no saving it," he said.

U.S. 278 near the scene was closed for several hours, as firefighters worked. The Cullman County Sheriff's Office reported the roadway re-opened at 9:30 a.m. Saturday morning.

"It was a necessity to have it closed, I'm just glad it didn't happen at 1 o'clock in the afternoon," said Byars.

Byars says the cause of the fire is unknown, and that the sheriff's office will be contacting the state fire marshal.

"There's so much gone right now, we couldn't find a possible point of origin," said Bates. "When the fire marshals get there, they'll have to determine that. I've been told they had hay bales at the front of the building. I've been told that, but I'm not 100 percent sure, but that could have been a big factor in spreading the fire. They've (Brick Haven) been doing work on the new building. Everything in the back building is fairly new. It has fairly new wiring."

Bates said the fire "didn't like much getting into the new building." He continued,"It burnt the opening, the breezeway. There's about 15 feet in between the buildings, and we were able to set up a line and keep the second building cool, except for where the breezeway connects the two. That part had a substantial amount of fire. If we hadn't been able to stop the fire when we did, at the time we did, if we hadn't had the resources there we did, it would have burnt that second building to the ground, with the amount of new wood in there."

Said Bates, "We were battling water issues, too. We had six or seven engines on scene, but we didn't have the water flow we needed. We were having to shuttle water back and forth."

Bates says the building is still smoking, but that his department and others are keeping a check on it and will more than likely be back out to the scene today.

According to Bridget Turner Millwood, daughter of Brick Haven owner Michael Keller, her parents are on a cruise in Mexico right now. "I got the call around 5 a.m. this morning and I was able to call him (Michael Keller) through my brother's messenger on Facebook," she said. "He is very devastated and is trying to buy a plane ticket in Mexico to get home. They said everyone from the wedding cleared out 20 minutes before the fire. We are waiting for the fire chief to investigate."

Millwood posted the following message on social media on behalf of her dad: "From the owner of Brick Haven to all the parties concerned, we deeply regret finding out early this morning that Brick Haven had a structural fire, from the pictures and my understanding the first building is a complete loss. Everyone has our deepest apolog(ies) for any inconvenience. We know everyone has a lot of questions. Most importantly, no one was injured , including the brave firefighters and volunteers of the community, who fought their hardest to save Brick Haven. We regret to say that we are on vacation in Mexico. I do not have any service on my phone at this time. I am trying to get a flight out of Mexico, to return home, if worse comes to worse I will return to New Orleans on Monday morning. All parties will be given (a) full refund. To our (recollection), we have more than 30 weddings still on the books. When we return, we will be answering Brick Haven's phone, we have little to no service here. I am sorry that I do not have all contacts with me at this time or I would be calling. Thank you with my greatest apology! Sincerely, Michael Keller and Amanda Daniel Keller and Brick Haven Staff"