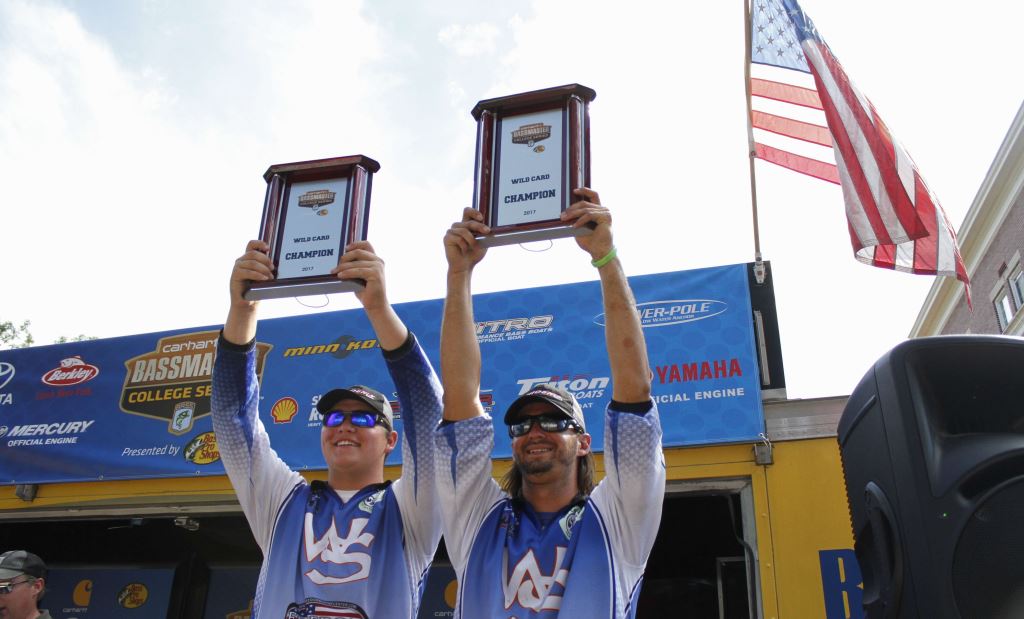 It’s the second Wild Card championship (presented by Bass Pro Shops) for Wallace State’s BASS fishing club over the past three summers, and the second time Butts has been a part of the winning duo for the college. He previously won in June 2015 with teammate Justin Rivers.

“It’s another huge step for Wallace State fishing to know we have won two Wild Card events. It’s great publicity for the college, and I’m so glad Reid (Conner) is able to experience the excitement behind it. I definitely wanted to win this one for Reid. This was his tournament,” said Butts, a St. Clair County High graduate, who wasn’t fishing too far from home during the tournament. “We found a great spot on the river, and I knew we had a great shot to win after that. This shows that Wallace State is a great place to pursue your love of fishing, while also earning a great degree.”

Butts and Conner finished the three-day event by hauling in fish weighing 40 pounds, 11 ounces. Both were already atop the leaderboard heading into Saturday’s final round and closed the tournament by catching five fish weighing 10 pounds and 13 ounces from Lay Lake, which borders St. Clair, Talladega, Shelby, Coosa and Chilton Counties.

Butts and Conner launched each day at 5:30 a.m., from Beeswax Landing in Columbiana, and quickly found a spot off the Coosa River that proved to be prosperous.

“A lot of this tournament was river fishing and something I was used to. I had a good feeling as to where they would be feeding in the morning, and we used crankbait to catch some of our top fish at a spot about 20 minutes from the launch,” said Butts, who’s majoring in business management. “We had to adjust on the last day because they weren’t feeding as well, but we recovered and Reid found us a huge catch late in the day.”

Before the weekend, Butts and Conner had been on the brink of a championship since January, finishing in the top 10 in three different tournaments, including as high as seventh in the Cabela’s Collegiate Bass Fishing Championship at Pickwick Lake in May.

They ultimately won it all at Lay Lake and punched their ticket to the 2017 Carhartt Bassmaster College Series National Championship scheduled for August 10-12 at Bemidji Lake in Bemidji, Minn.

“It’s only been a couple of days since we won, and I’m still getting used to winning my first collegiate tournament. It’s everyone’s goal to win a tournament, so it’s a huge accomplishment for me,” said Conner, 18. “Josh is a great partner to have on the water and honestly the best angler I’ve ever fished with. He’s taught me a lot things, and we’ve become such good friends on and off the water. You have to be good friends to be successful.”

Conner, a Gardendale High graduate, is a general studies student at Wallace State.

Butts and Conner thanked all of the club’s sponsors, including Freedom Marine Center in Albertville.