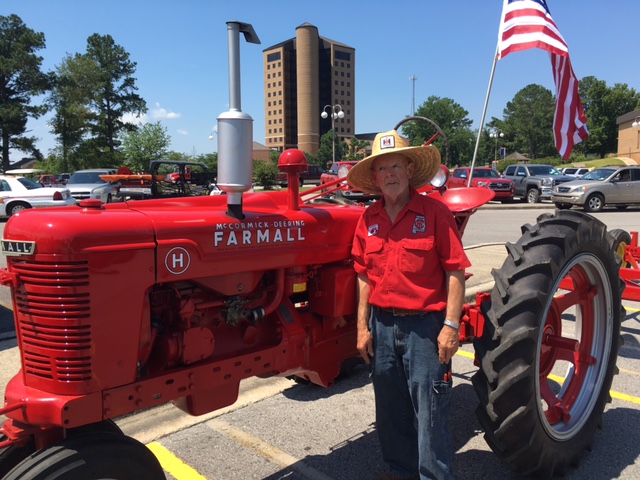 Sherman Roberts had the oldest operational tractor at the show, a 1939 Farmall “H” / W.C. Mann

HANCEVILLE – Who would have thought that a tractor show would face stiff competition from, of all things, another tractor show?  Who knew tractors were so popular?  On Saturday morning, there were a bunch of folks at Wallace State Community College who knew.

WSCC hosted the 19th annual Hanceville Antique Tractor and Engine Show, bringing in collectors and active farmers from all over the area.  Turnout was down this year, mainly due to a conflicting event; several local collectors already had their equipment loaded up to take to the Red Power Roundup, a national tractor show being held in Des Moines, Iowa this year.

It turns out, tractor shows are actually a pretty big cultural phenomenon in rural America.  From late February into December, a hardcore enthusiast who’s willing to travel can find an event almost every weekend, with occasional overlaps like that which hurt the Hanceville show this weekend.

Despite the schedule conflict, local enthusiasts lined the parking lot in front of the Health Sciences building with vehicles from vintage Cub Cadet lawn tractors to big classic John Deere and International commercial farm pieces.  Event Coordinator Charles Allen was a little disappointed at the smaller number of displayed pieces this year, but still pleased with attendance.  He talked about this year’s show and the event’s history.

“This is the 19th annual show,” he said.  “It was started by Jimmy Hamrick and Hershel Needham.  They’re both now deceased, and Bonnie Hamrick Brannan and myself are taking it over and keeping it going.

Over the years, this show has routinely drawn collectors and farmers from all around Alabama as well as surrounding states.  No one has charted the economic impact, but it does bring an uptick in business to local hotels, restaurants and others.

Participants and visitors could find homemade ice cream made with churns powered by antique engines, hamburgers and hot dogs from Two Fat Men Catering, and competitive events you won’t see in too many places.  A series of “slow races” were exactly that, testing how slow a low-geared and throttled-down tractor could go without stalling; a trophy was given to the last driver to cross the line in each of several heats.  A ladies-only skillet toss tested competitors’ ability to heave a specially-designed heavyweight cast iron skillet, in three age group categories.

Of her dad and show founder Jimmy Hamrick, Brannan said, “He’s always been a tractor enthusiast.  He always loved tractors and had been around them, worked on them, liked restoring them.  He had a passion for them.  He farmed and worked, too.  He loved his community, and he loved giving back.  If he could do anything for you, he would; so this was just one way to give back to the community.”