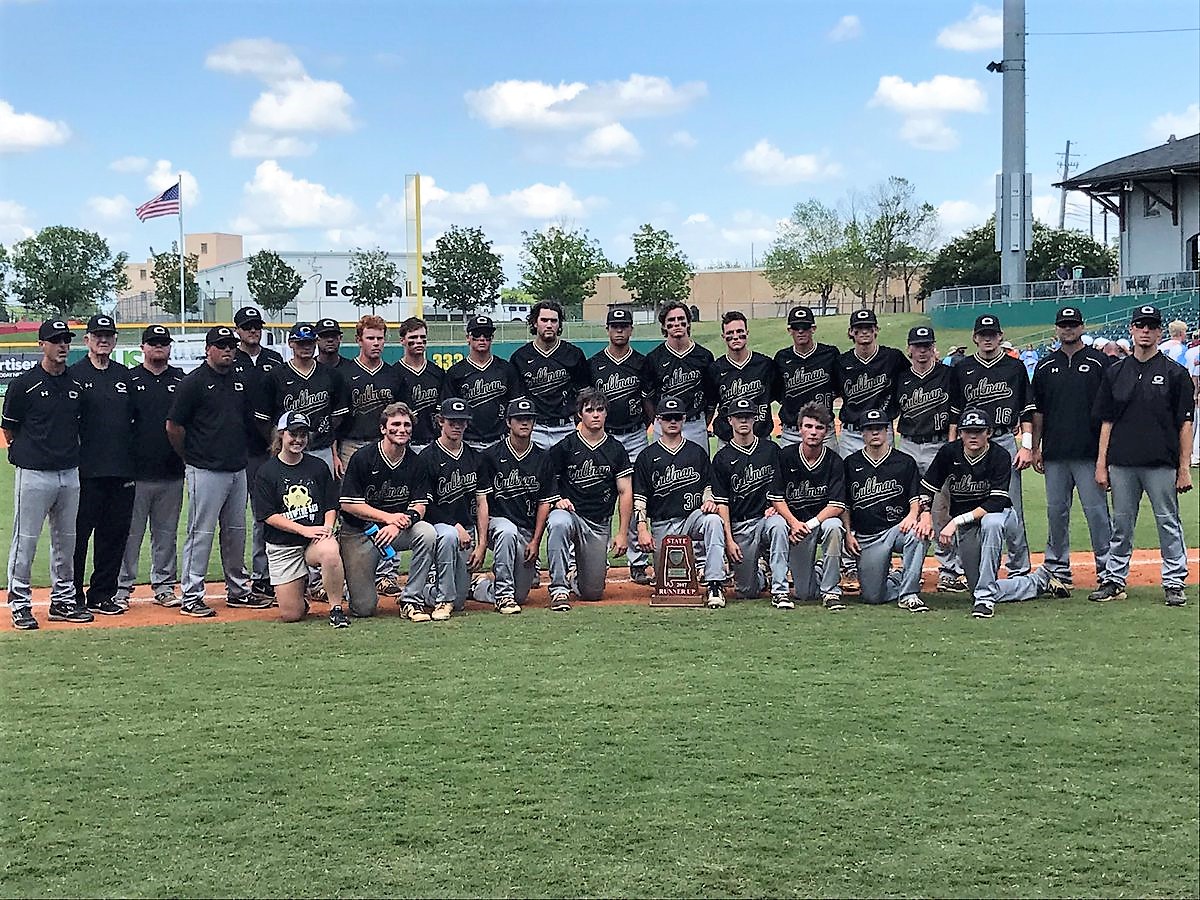 CULLMAN – Not often does the final pitch in a baseball game determine the outcome for both teams participating when the stakes are high.

That was the case on Friday afternoon when Cullman's Carter Bowen got ready to take a 3-2 pitch from Helena reliever Brooks Brophy. Cullman had the bases loaded with two outs. A solid hit by Bowen would send them into victory celebration.

But Bowen flew out deep to left field and it was Helena that celebrated by a 5-4 final, coming back from a 1-0 deficit in the AHSAA Class 6A championship series, putting the Bearcats at runners-up in this classification for the second consecutive year.

The thrill of victory and the agony of defeat came at the same time in one of the most dramatic endings for two teams about as equal on the diamond as they could be.

A pattern by Cullman and Helena followed what had been set earlier in the week in other championship series.

At the conclusion of Class 6A, four other classifications were decided in game three as well. Sweet Water's 8-7 win against Decatur Heritage on Tuesday, completed the 1A series with Decatur Heritage unable to repeat as state champions.

A day before Cullman and Helena played a twinbill to decide the outcome of Class 6A, Russellville was taken to the tiebreaker in the 5A series with Faith Christian. Faith won game two 8-7, then Russellville got it together and claimed a 7-4 victory, returning home with a second straight 5A championship.

Since Cullman moved to Class 6A under the realignment of the AHSAA in 2015, the Bearcats have faced three different opponents for the grand prize of 6A baseball. Two of the three years, the series has been decided by the tiebreaker.

Cullman edged Pelham two games to one in the 2015 classic. Last season, Hillcrest-Tuscaloosa knocked off the Bearcats in a sweep.

Of the four championships that went to a third game, the Cullman-Helena series was the tightest. The final two games were decided by a run after Cullman controlled game one Thursday evening at Paterson Field 9-1.

It has become normal for the Bearcats, working hard when they begin spring training under cool weather in January and finding themselves playing in the final week of the season under humid conditions and at times, weather delays, in Montgomery.

How good was Cullman and Helena baseball in 2017? Very good. Both teams finished the season with 38 victories. Cullman had nine losses, while Helena lost six times.

Coach Brent Patterson's Bearcats were 18-3 when they returned to Alabama in early April after playing in the USA Baseball National Invitational in Cary, North Carolina. The Bearcats had a nine-game winning streak during March and ran off eight straight before Hartselle stopped them 4-1 on April 15.

Then it was 10 consecutive wins, nine in the postseason, before Helena had its comeback in game one on Friday, to force the series to the tiebreaker.

Helena went 17-2 since April. The Huskies’s only regular season loss in that span was to Spain Park on the 17th. The other loss was in game one of the state championship series with Cullman.

Cullman came into the playoffs rated No. 1 by the state sportswriters with Helena second in the 6A poll.

Not winning the state title once again will hurt for a period of time, especially for those who played their final game in a Cullman uniform Friday.

Owen Lovell, Jacob Heatherly, Noah Fondren, Levi Thomas, Bowen, Caleb Lipsey and Kade Williams say goodbye, but have plenty to be proud of being the best team out of the North Regional for two consecutive years. This group produced 89 victories between 2016 and 2017, with only 23 losses.

These six have accepted offers to play collegiate baseball. Lovell is bound for Mississippi State, Heatherly and Fondren to Alabama, Bowen to Auburn, Thomas to Troy University, Lipsey to Wallace State and Williams to Snead State. All programs will accept these hard-working young men with open arms.

Will Morrison has committed to play at Alabama after he graduates next year.  Morrison will return to Riverwalk Stadium July 18 as a pitcher for the North in the annual AHSAA All-Star series.

Cullman's five-week venture in the playoffs has come to an end. Tears were in the eyes of all. Patterson said it best in the post-game news conference.

"I wouldn't change a thing, except for the outcome. I am proud of my guys. I couldn't ask for any more."