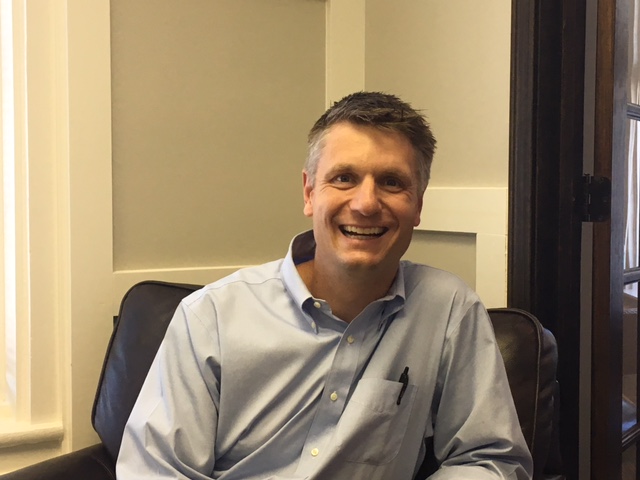 CULLMAN – It’s a long way from New York to Cullman, but Tom Richter had good reasons to come.  He’s the new pastor at Cullman First Baptist Church (FBC), having started March 26.  The Tribune sat down with Richter this week, to get to know him a little better.

“Richter” is a well-known name around Cullman, but this Richter is not one of them.  He was born in Cincinnati, Ohio, raised in Kentucky, and he has spent the last 14 years in New York.  He came from an urban church with an average weekly attendance of 150 down to the Bible Belt, into a small-town church that can run more than 600 on a Sunday.

So how did you end up in Cullman?

“The short answer is God, in that only God could arrange for me to come here.  The slightly longer answer is that I married a girl who is from Cullman.  I married Jackie Dobson, whose parents Charlie and Paula Dobson ran the All Steak restaurant for years and years.

“We were very happily ministering in New York City, at my last ministry.  For 14 years, I was a pastor in Jamaica, (a neighborhood in) Queens, New York.  We have three children, ages 8, 5 and 3, and for many years there was never any desire to leave.  We never felt unsatisfied or unhappy.

“As the kids got older, we felt more open to a sense of rootedness.  Her parents being here, and we really wanted our kids to get to know their grandparents well.  You can do that from a thousand miles away, but we thought ‘Wouldn’t it be a dream if we could get within four hours of our grandparents?’  When the opportunity opened up here, it went from four hours to like four minutes!  So, we just feel tremendously blessed.”

What’s it like, coming from New York City to Cullman, Alabama?

“I grew up in Murray, Kentucky.  Murray is a small town surrounded by a larger county that has agriculture as its backbone.  That is like what we have here.  For me, it’s not like a total culture shock.

“The funniest thing for me, perspective-wise, was through the eyes of our kids.  Jackie being from Cullman, me being from western Kentucky, we just assumed we’d been raising southern children.  It dawned on us: ‘They were all born in New York!  We’ve raised Yankees!  How did this happen?’

“We lived in a three-bedroom apartment that was 971 square feet, on the seventh floor with our family of five.  That’s all they’ve known: apartment living with a very urban feel.  So we’re looking at a home here in Cullman, and my 5 year old is standing in the yard, and he’s got this weird look on his face.  I ask him what was going on, and he says, ‘Dad, this house was built on a park.’  I said, ‘No, son, this is called a lawn; they have these here.  They’re called yards.’  He looks around and goes, ‘You mean all these houses were built on parks?’”

What impressed you first about FBC?

“I think the church is filled with kind people who go beyond just southern hospitality, and really try to model Christ-like hospitality; and they’ve shown that in the way they’ve welcomed us.  I’m not from here, but they’ve embraced me and our family.

“Another thing is, the Sunday School has really impressed me.  I’ve been asking around as I’m getting to know the members, ‘How does pastoral care happen in this church?  If there was a tragedy in your life, who would bring the casserole?’  They say, ‘My Sunday School.’  And I see that: they’re calling each other throughout the week, they’re caring for each other, they’re making space for new people to come, they’re really reaching out.  They’re functioning so cohesively; I’ve really been impressed.

“If people are looking for a church, they should come, but not just to the service.  It’s that Sunday School ministry.  It’s not just that hour of teaching on Sunday; it’s caring for each other, it’s showing up at the hospital and praying for a Sunday School class member who’s sick.  You cannot replace it, and I think everybody needs that faith family in their life.

“The third thing I would say, and I’ve seen this in churches all over the county, is a concern for the poor and less fortunate.  There’s all these different ways of caring for people who are less fortunate, saying ‘You matter to God, you matter to this church, you’re not alone and you’re not forgotten.’  That really spoke to me, and to my wife even more.  She’s very concerned about the poor, especially children.

A year from now, what new things will people see at FBC?

“A year from now, I would like it to be easier for folks who are not part of the church to be able to plug in.  With any organization, once you’ve been in it for a long time, you forget what it’s like to be a newcomer.  The way we can really help with that will be a new website, a place where people can go and, long before they come to our church, they can check out our church, watch a service online.

“I wish I could take credit for these changes, but we’ve got really smart folks that understand all the technology and stuff.  They know how to stream services and do all that.  The capability is there; the brainpower is there in our church to do that stuff, to really help not just those who are already part of the family of God, but to really reach out to those who are hurting, who want to be able to navigate their way into the life of the church but can’t seem to find their way.  I want to make it easy for them to take that next step of faith.”

“Mark 16:6 – ‘The angel said to the women who came to the tomb, ‘Don’t be alarmed.  You are looking for Jesus the Nazarene, who was crucified.  He is risen; He is not here.’  I guess my favorite part of that verse is when the angel says, ‘He is not here.’  He doesn’t specify where Jesus is; He’s just not here.  We have a deity who’s on the loose, and could be showing up anywhere.  That gets me excited: that God is on the loose in Cullman County and around the world; and that everywhere Christians are celebrating that He is risen.”

“FBC was here a hundred years before I was born.  Unless Jesus comes back, this church will still be here for my grandkids, if God wills.  Coming from a church plant (mission church) in New York, I saw so many advantages; there was so much freedom to try new things.  But here, it never occurred to me what an advantage that godly legacy has been.  I heard it said once that God gave us the Church so we could practice love, and part of what makes FBC special to me is seeing generations coming together, worshiping the same Lord together and blessing each other.”

Find out more about Pastor Tom Richter and FBC at www.cullmanfbc.com.