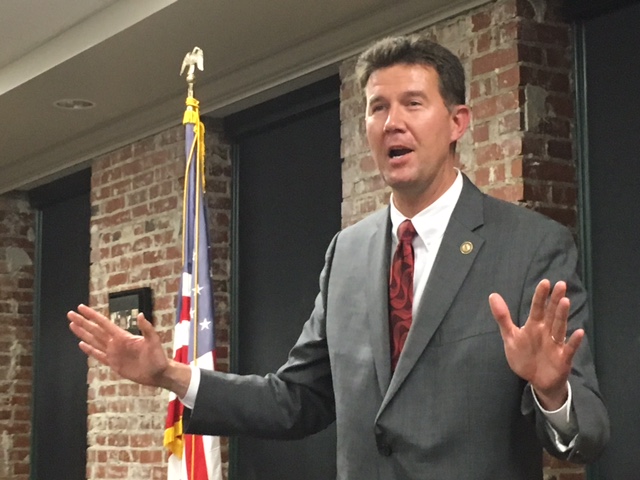 Several of those officials addressed the crowd.  While each addressed multiple topics, most eventually focused attention on some particular issue.

Gentry went on to mention programs that are available for the 360 (average at any given time) inmates at the county jail, but lamented the lack of long-term care facilities for mentally ill people who are housed in jail for lack of any other place to put them.

He noted that revenue is at a historic high, and asked what the County will do with it.

“If we keep taking that money and putting it other places than roads, we’re backing up,” Marchman warned.  “We can’t maintain the infrastructure of our county, if our county’s not going to fund it.  All our municipalities, if they can fix their roads, they’re going to boom; but we’re not going to as a county.  We’ve got a problem; how are we going to fix it?  If we’re going to fix roads, we’ve got to put money in roads.”

Marchman touched on long-term plans the commission is working on, including a focus on keeping main county thoroughfares like County Road 222 in good repair.

Watson pointed out that the County has repaired 14 miles of roads this year, and that the commission is looking into new technologies that could drastically reduce the cost of resurfacing roads.

“Our goal,” added Watson, “is to put you on the best roads you can have to drive on; because when (the Chamber staff) are recruiting industry, they want good roads to get their merchandise from point A to point B.  And when our superintendents have kids riding buses, we want safe roads for those kids.”

McSwain talked about the many duties of the Circuit Clerk’s office, but her presentation came to concentrate on a program called the FRAC Docket: “Fines, Restitution and Costs.”

“We’re trying to recover some of the monies that are owed to our citizens out here,” she explained.  “We’ve been very successful with that.  The last docket we did, just in that day alone we collected about $30,000; and that’s money that goes back out to the community to the citizens with money owed.  We’re working diligently to get that money to those folks, and not just let the defendants think, ‘Well, I served my time, so I don’t owe anything.’  That’s not the case.  Even though you do your time, you’ve still got to pay.”

All three area judges talked about problems in sentencing in criminal cases, primarily rules that allow the Alabama Department of Corrections to bypass local courts’ sentences.  Chaney was the primary spokesman on the issue, with brief comments from Williams and Nicholas.

“About three or four years ago,” Chaney explained, “the legislature passed a law about sentencing guidelines for criminal defendants who are sentenced to prison.  We’re all about trying to give people chances to do better.  A lot of people are addicted; a lot of people have mental health issues that we try to work with.  But every so often, there are folks that need to go to prison; because my job is to make this a safe place to live and raise your family.

“The thing that bothers me about the new sentencing guidelines is that judges have absolutely no say how long somebody goes when we sentence them to prison.  And I’m here to tell you that if we have someone who was sentenced to 20 years in prison, once they leave Cullman County the department of corrections can release them any time they want to.  I have people I sentenced to prison for seven years, who were back in Cullman County in 60 days.”

The judges made the point that criminals have little incentive to change their ways when they face short sentences, due to overcrowding in the state’s prison system.  Chaney stated that the state system is only keeping the worst offenders, and letting drug dealers and others go free with little time served.  Williams pointed out that even some of the worst are slipping out.  Chaney recognized that funding is at the heart of the overcrowding problem, but called on the legislators to try to think of ways to fix the sentencing issue.

Harbison launched into an attack on SB 112, which would require law enforcement agencies to submit records to the state of every traffic stop, noting information including the race and gender of both the officer and the person stopped.  The stated purpose of the bill is to prohibit racial profiling by police.

Of the information required by the proposed bill, he said, “We already have that information in our dispatch.  We’re doing this to please a certain group or a certain legislator who introduces this, but it’s costing us as taxpayers money.  I’m afraid it’s going to get to a point where law enforcement’s afraid to do their jobs, afraid to pull this car over, because they’re afraid of making the front page of the newspaper or the evening news.”

Shedd reflected on former Gov. Bentley and other recent scandals that have harmed the reputation of the state government in the eyes of Alabama’s citizens.  He said he did not want to focus on things that have passed, and would prefer to look to the future, but he understood that confidence in state government has been shaken and will not be quickly or easily restored.

“The biggest problem right now, other than revenue,” said Shedd, “is the public’s confidence.  We do need to understand that a lot of the things we’ve been trying to address in recent months, those of us in the legislature just did not have the confidence that we could send the executive branch $800 million to address problems with.

“The public’s confidence is a serious problem.  But we do have a brighter day ahead of us.  I really believe that.  People who know Gov. Ivey well tell me that she is a good manager; I hope that’s the case.  I’m going to do my best to do what’s right.”

Shedd introduced Merrill as secretary of state, and as “future governor of Alabama.”  Merrill, in a speech several people observed would make a good gubernatorial campaign speech, emphasized both the need for government accountability, and how his office has demonstrated that principle.

“We have some outstanding state employees,” he stated, “and we have some that need to find something else to do outside of state government, period.”

Merrill talked about finding staffers in his own office who were not showing up to work, leaving early and generally not doing quality work.  He then described what he did to remedy the problem, including an approximate 25 percent reduction in staff and streamlining of procedures.  He claimed that for 42 consecutive weeks, business filings that were taking from seven to nine months to get through his office when he started are now being completed in one day.

“If you don’t remember anything else I tell you,” Merrill insisted, “remember this: I work for you.  I work for the 4.8 million people in this state.  The people who work in Montgomery, you need to have that expectation.

“With those economies of scale that we’ve put in place, and redirecting the process about what’s going on in our office, we have saved you, as of today, $1,719,021.21 that we can show you line item by line item.