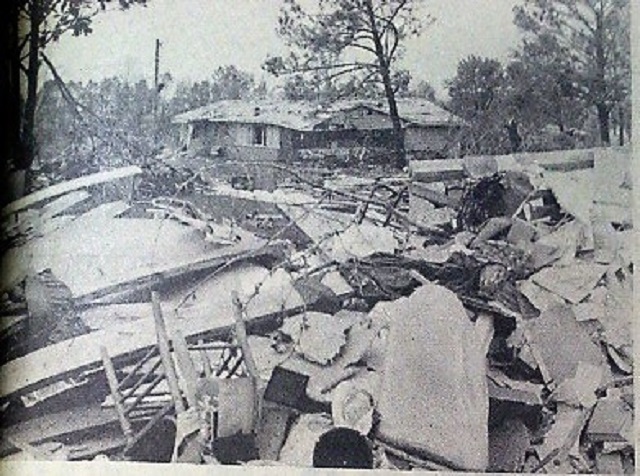 On April 3, 1974, Cullman was struck by a destructive EF4 tornado. The tornado was part of a large outbreak of tornadoes now known as the 1974 Super Outbreak. This outbreak was considered one of the largest, most destructive tornado outbreaks on record until the 2011 outbreak. Thirteen U.S. states and one Canadian province were affected, covering an area stretching from Alabama and Georgia all the way to Michigan and Ontario.  The Alabama tornadoes included the EF5 tornado that caused significant damage to Guin and the EF4 that struck Cullman.

The Cullman tornado touched down around 7 p.m. in Pickens County and remained on the ground for close to two hours. It entered Cullman County near Brushy Pond sometime around 8:30 p.m., and moved through Trimble and Grandview before reaching the city of Cullman. The tornado entered the city on the southeastern side near the Buzz Oil Station (near where the Town Square Shopping Center is now). It destroyed the Big K department store, an apartment complex, East Park Shopping Center and numerous homes before leaving the city around the Larkwood area. One of the homes destroyed was that of Circuit Judge Fred C. Folsom. The Norrell-Fields Dodge car dealership and Morgan Oil Company were also damaged.  Two main TVA lines were downed, leaving much of the city of Cullman without power, and telephone service was also knocked out. The tornado finally lifted and dissipated north of the city near Lake Catoma, and was eventually rated an F4. The total number of homes damaged or destroyed by the twister was estimated to be around 200. At least one person was killed, and numerous injuries were reported.