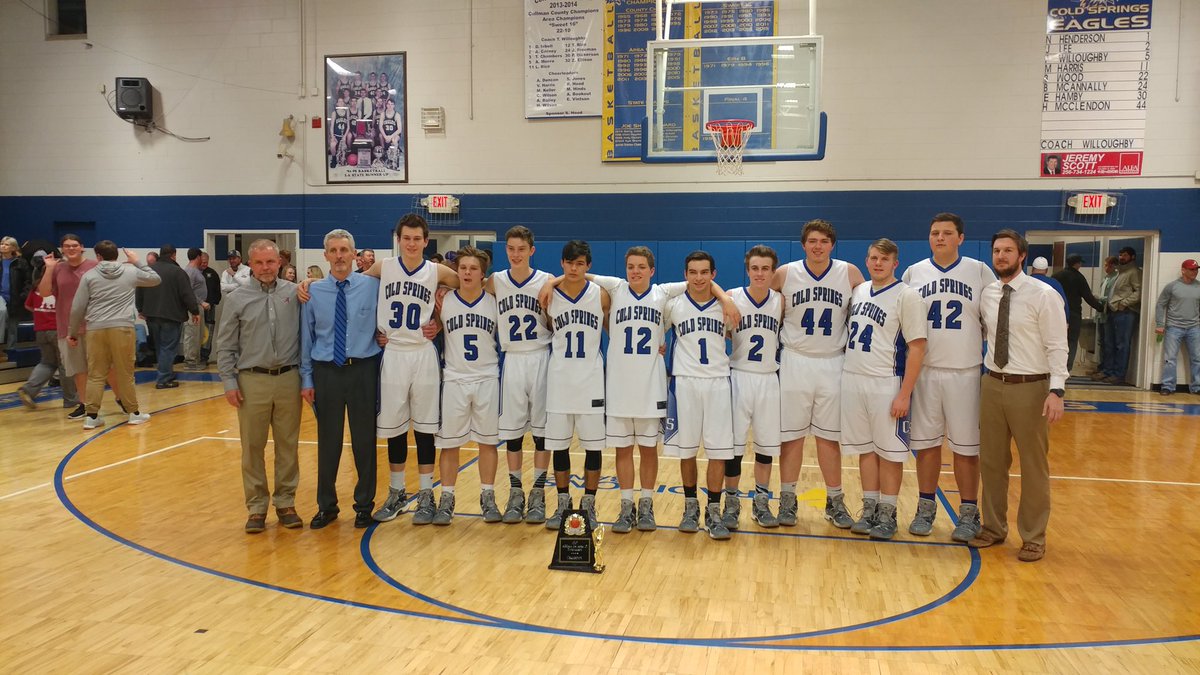 BREMEN – It was a thriller and a thumping Thursday night as the Cold Springs Eagles welcomed the Winston County Yellow Jackets to Bremen for a pair of 2A, Area 13 championship games.

Cold Springs opened the boys game with a jumper by Jesse Lee but didn’t get much else as they were ice cold from the floor. Luckily for the Eagles, the Yellow Jackets were equally as cold, as the first quarter ended in a 9-9 stalemate.

Blake Wood gave the Eagles a short-lived lead when he hit 1-of-2 from the line, but Hayden Pendergrass quickly answered with two of his own from the line. The next trip down the floor was a big one for the Eagles, thanks to Fisher Willoughby, who buried a three to give Cold Springs a 13-11 advantage, starting a 9-0 run with Wood dropping in four and Lee adding two to force a Yellow Jacket timeout. Out of the break, Cold Springs and Winston County spent the rest of the half exchanging points with neither getting a foothold. The Eagles took a 27-21 lead to the half.

It was a battle of attrition in the third as both teams combined for just eight points with the Eagles clinging to a 29-26 advantage. Pendergrass quickly tied the game when he converted three free throws following a 3-point attempt where he was fouled. Lee answered with a three followed by a steal and a layup to put Cold Springs up 34-29. Hunter McClendon and Eli Hamby came up big, combining to go 3-for-4 from the free-throw line to extend the Eagle lead to eight. Adam Kilgore hit a jumper for Winston County, but it was too little too late as the Eagles scored the last nine points of the game to down Winston County 45-31 and lay claim to the 2A, Area 13 title.

Emme Willoughby started the 2A Area 11 girls’ championship game on fire. She opened the game with a three for the Lady Eagles and immediately followed with an offensive rebound and put back. Camryn Crider added a three from the far wing that forced an early Winston County timeout. The Lady Yellow Jackets scored their first points out of the timeout, but Cold Springs continued to pour in the points with the quarter ending the same way it began, with a three from Willoughby, giving the Lady Eagles a 31-7 lead after one.

Crider opened the second with her third of five threes in the game. Neely Ellison and Willoughby followed with points to push the lead to 30. Mackenzie Blackwood and Abby West added early points for Winston County, but at the end of the half, the Lady Eagles were firmly in control, 52-15.

Just like in the second quarter, Crider got Cold Springs on the board first with a three, setting the tone for the second half. The Lady Eagles kept their foot firmly on the gas, cruising to a 90-32 victory, taking the 2A, Area 13 title and assuring themselves the right to host their sub-regional game.