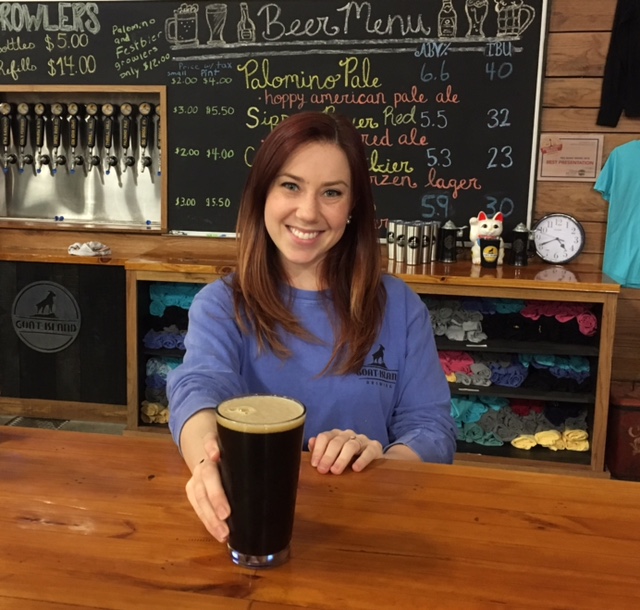 CULLMAN – Having been raised Southern Baptist in the buckle of the Bible Belt, I'm no expert on beer . . . or dancing (That's a story for another day).  But I'm a tinkerer, and I'm into all those TV shows that show you how stuff is done and things are made.  So, when I was invited to visit Goat Island Brewing, I was on it.

I arrived at the brewery at 1646-A John H. Cooper Dr. in Cullman a little before they got cranked up for the after-work crowd.  I walked into an intriguing place: a large warehouse divided into inviting social spaces with tables, chairs and an old-fashioned bar- and cool industrial work spaces full of towering stainless steel contraptions.  One part “Cheers” and one part “Battlestar Galactica,” and I liked them both.

I stopped first in the Tap Room (family-friendlier version of a bar), partly because it was interesting, partly because that's where I was meeting my guide for the visit, and partly because "Don't You (Forget About Me)" came on the stereo and I didn't want to miss it.  (I was a teenager in the 80s, Simple Minds was the greatest pop band to ever come out of the Scottish Highlands, and “The Breakfast Club” was an awesome movie.  Don't judge me.)

There I met bartender Hillary Brewer and my host Mike Mullaney, one of the four owners of Goat Island.  Mullaney and partners Brad Glenn (Tap Room manager), John Dean (marketing) and Gary Teichmiller (brewmaster) created the company after success with a one-barrel home brewery as the Blue Moose Brew Crew at the former Blue Moose Cafe and Brew Pub in 2013.

"We shared the kitchen with that little system, but we had a good time," Mullaney related.  "We learned a lot, and we proved that people love our beer.  And so, as that was kind of fading away, we said, 'You know what?  We need to start a real brewery.'"

They spent 2014 making plans, and 2015 setting up the current building, doing most of the work themselves after hours from their day jobs.  They got some investors on board, and turned an empty warehouse building into Goat Island Brewing; installing offices, storage rooms, bathrooms, the bar, giant refrigerated cooling room and of course all the shiny steel things that make the beer.  In April 2016, they opened the doors.

Goat Island offers seven styles of craft beer, each one named for some Cullman County entity:

For you "how's it done" folks:

Mullaney took me on a tour of the brewing operation, walking me step-by-step through the process.  He explained how the barley (the main ingredient aside from water) is prepared, and how different types are used.  He then took me to the Cracking Room, where the barley is coarse ground in preparation for making "mash."  In the mash tank, the starches in the barley are broken down into the sugars that will ferment into alcohol.  At its next stop, the boiler kettle, the mash is boiled and hops (the bitter stuff) are added.  Through a cooling device, the liquid drops from more than 200 to 65 degrees, on its way from the boiler to a fermenter, where yeast is added and the forming beer will spend from three to six weeks.  The last stop is called a bright tank, a pressurized container that carbonates the beer and gives it that sudsy foam.  Most of this equipment sits in plain view of the Tap Room bar and tables, and they seem to like showing it off.

After it's finished, the beer is kegged and put in cold storage until it is shipped out or pulled for Goat Island's own Tap Room.  During a single brewing cycle, the brewery can produce 900 gallons of beer.

After the tour, Glenn joined us in the Tap Room.  We sat and talked about current business and the future of Goat Island.

Mullaney shared about business, "It's been really, really good.  If you go in just about any restaurant in Cullman that has a tap, they have our beer; at least one tap, and a lot of times it's three or four.  We're in Huntsville, Birmingham, Mobile; we're all over the state now.  Business is quite good, and we've only been in business for nine months now!"

Goat Island's plans for the future require new containers and bigger maps.  Mullaney talked about an upcoming trial with canning, as well as potential marketing forays into Georgia and north Florida.

Glenn spoke about an upcoming special event at the Tap Room:

"On Feb. 11, we're having an event for Valentine's Day.  We're going to have a meal catered; people need to RSVP to get one of the 75 seats for a $25 per plate Filet Mignon or chicken, the best garlic mashed potatoes you'll ever taste and a salad bar.  We'll be eating at about 6 p.m. on that Saturday before Valentine's Day.  Gary Evans, a local musician, will be playing and singing.  You only have to RSVP for the meal, and there's no cover charge.  Anybody who wants to come can come, but if they want to participate in the meal, they'll need to email or contact Hillary here." (See email below.)

Given the opportunity for a final word, Mullaney stated, "People need to know that we're open every day but Sunday.  You can get a growler, a half-gallon bottle of beer, and take it home with you.  We're open for business starting at 2 p.m. every day."  (The growlers, by the way, are refillable.)

You can find Goat Island Brewing online at www.goatislandbrewing.com.  You can also look for them on Facebook, Twitter and Instagram.  They even have a downloadable app for iPhones.

Those interested in attending the Valentine's dinner on Feb. 11 should RSVP by email to hillary.brewer@goatislandbrewing.com.