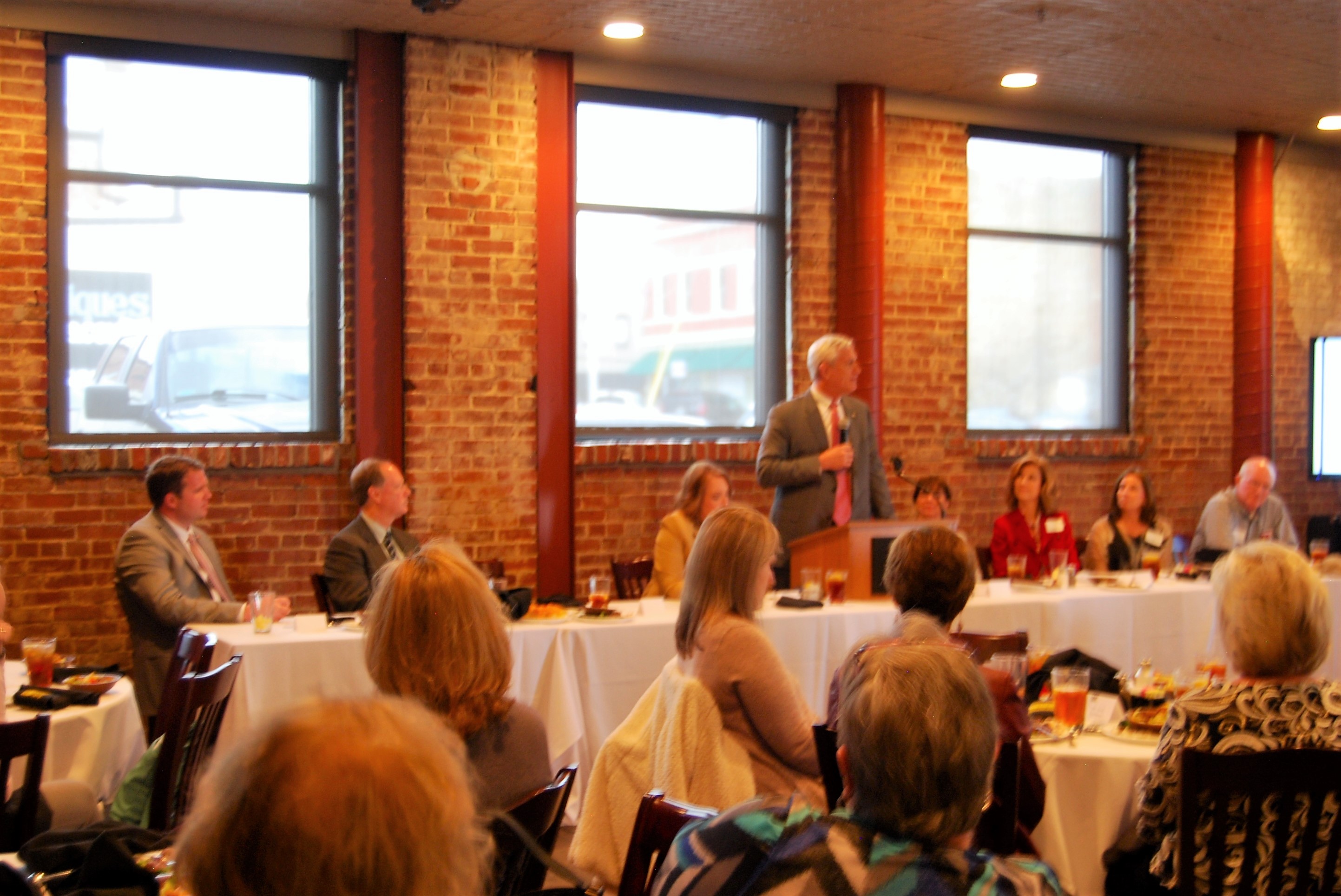 CULLMAN – Cullman County’s legislative delegation spoke to a packed house Friday at the State of the State luncheon, hosted by the Cullman Area Chamber of Commerce.

The All Steak restaurant’s meeting room was filled with area leaders, business people and others who were interested in hearing about what Montgomery has in store for the coming year.

Rep. Randall Shedd, R-Fairview spoke eloquently about 10 things that are top priority for him. “The most important thing we can do right now is to regain the public’s trust in our government,” he said.

Among other top priorities for Shedd are protecting the unborn, public safety and leveling the playing field for the small businessman. “I think sometimes there is focus on big business but we don’t need to forget the mom and pop businesses that are also important to our economy,” Shedd stressed.

Law enforcement retirement and other retirement benefits are also of concern to Shedd, as is transportation.

County road repairs and maintenance and adding a third lane to I-65 were also part of Shedd’s agenda.

Opening up the floor for questions, Harbison fielded the first one, about the lottery, by saying that although he might not be in favor of it himself, he would vote to allow the public to vote on it.

“Every time anyone goes across a state line to buy a lottery ticket, they buy gas, drinks, cigarettes and pay taxes to someone else,” he stated. “But the mandate is that it be a ‘clean’ lottery bill, and it’s hard to define a ‘clean’ lottery bill. I will leave that up to the citizens, by supporting their right to vote on the issue,” Harbison vowed.

He reiterated, “Any raise would have to be constitutional, but I’m not a fan of raising primary residence taxes.”

On the subject of prison reform, Harbison was introspective about borrowing $800 million for new prisons. “We need to study on this,” he said.

Sen. Paul Bussman, R-Cullman also addressed the mega prison concept. “We have to sit down and study how to fund government; we actually had senators breaking down emotionally because we had too much BP money, but there is not enough money to fund everything; we need to identify the most critical issues.”

Bussman outlined how a forensic audit is on the horizon for state government departments. “The new theory is to find out what is really going on in each department,” he said.

“If we don’t know what questions to ask, then we can’t find the answers; we need to know what books to look at in order to find the waste,” he said. “It’s critical to identify what we need.”

“We were set up to build one prison every year for four years,” he outlined the plan. “But we didn’t know if the first one was saving money and we were already scheduled to start the others.”

Education is another of Bussman’s priorities. “There are tremendous opportunities in education,” he said. “We’ve been asked to come up with a plan to improve education in the legislature, but we are not educators, so we started with the state board of education. They need to fix and grow education in Alabama, and if they can’t do that, then we need to move state funds back to local representatives.”

Cullman Chamber of Commerce President, Leah Bolin, presented the representatives and senator with distinctive photographs of Cullman County landmarks. Bolin went on to outline the chamber’s upcoming itinerary, which includes a five-year strategic plan whose motto is to “Think Local.”

The luncheon adjourned to applause for the dignitaries amid a feeling of conviviality and energy for the future of the county and the state.

The 2017 regular session of the Alabama Legislature convenes on Feb. 7.  For more information, visit http://www.legislature.state.al.us/aliswww/default.aspx.