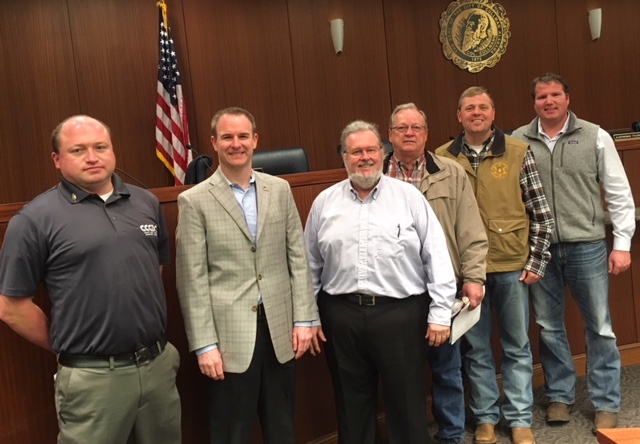 CULLMAN – On Monday evening the Cullman County Community Development Commission (CCCDC) met to consider requests for grants, and awarded seven grants totaling more than $160,000 in disbursements.  The commission usually retains a $100,000 reserve, but according to Chairman Bill Strandlund extraordinary circumstances called for the commission to bypass that policy.  Starting the meeting with a $100,000 reserve and $67,966.89 in available funds, the close of the meeting saw the commission with $4,666.89 in hand.  Several community development projects benefited greatly, though.

The meeting opened with a roll call, noting that all commissioners were present: Bradley Williams, Joe Golden, Josh Speakman and Strandlund.  Due to recent clerical issues, no minutes were presented.

The floor was then opened to public comments, with five attendees taking the opportunity to express themselves.

Cullman County Sheriff Matt Gentry spoke about the purchase and development of property in Crane Hill for a Sheriff's Office substation in western Cullman County.  With the help of a Commission on Aging grant, the department has bought the site of a former senior center, with the intention of rebuilding the structure to house both the substation and a new senior center.  He sought a grant from the CCCDC to pay for construction.

Cullman County Commissioner Gary Marchman came to request a grant to help pay for the transportation of hay to local livestock ranchers.  He noted that the drought has forced farmers to purchase much more hay than they normally would, and that the cost of transporting that hay places the cost above what some can afford.  The result is that some Cullman County livestock ranchers are simply closing their farms and getting out of the business.

Hanceville High School Coach Chris Wright came to request a grant to repair and improve the track at the HHS stadium.  He said that the current condition of the track makes it unsafe for runners, and that two more lanes need to be added to bring the track up to competition specifications, so the school can host track events.

Melissa Hudson of The Crossing (a Hanceville organization helping the needy) came to request a grant to purchase hygiene kits to give to the group's clients.  She noted that typical food bank funding does not cover such goods, so the group must find other sources.

Last to speak was Cullman County Economic Development Director Cherrie Haney, who came to request grants for kitchen repairs and improvements at the Cullman and Colony Senior Centers, and for preservation of historic maps at the Probate Office.

Next, the CCCDC's financial report showed that the agency had a current fund balance of $167, 966.89.

There being no old business, the commission moved to the new business of considering grant requests.  The following grants were approved, in order:

No. 436 – $60,000 for improvements to the Cullman County Volunteer Firefighters' Association training facility.  The commission noted that the improvements would benefit all county firefighters as well as the Sheriff's Office that also uses the facility, and that all members of the county's state congressional delegation had signed a letter of support.

No. 466 – $50,000 for construction of the multipurpose Sheriff's Office substation/senior center at Crane Hill.  This request had also been accompanied by a letter of unanimous support from the county's state congressional delegation.

No. 467 – $12,000 to the Cullman County Soil and Water Conservation District to pay for transportation of hay to local livestock farms.

To learn more or to submit a grant application, visit http://co.cullman.al.us/cccdc/cccdc.html.

The CCCDC has scheduled its next meeting for Monday, Apr 17 at 6 p.m. at Cullman City Hall.