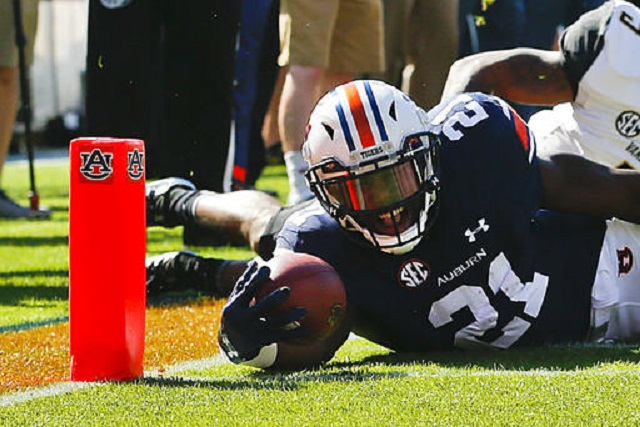 (AP Photo/Brynn Anderson). Auburn running back Kerryon Johnson dives over the goal line for a touchdown against Vanderbilt during the first half of an NCAA college football game, Saturday, Nov. 5, 2016, in Auburn, Ala.

AUBURN – It was a different look for the Auburn Tigers as Sean White was not starting under center for the Tigers for the first time in the impressive five-win streak for the Tigers due to being banged up. However, it was the same result as the Tigers took care of the Vanderbilt Commodores 24-16.

Vanderbilt got the ball to start the game and immediately went to work. Trent Sherfield got the Commodore offense going with a 19-yard carry around left end. Kahri Blasingame followed with a 9-yard rush to the Auburn 47. Kyle Shurmer completed back-to-back passes to Dallas Rivers and Kalija Lipscomb before the drive stalled and they were forced to settle for a booming 52-yard field goal from Tommy Openshaw to give the Commodores a 3-0 lead with 12:16 left in the first.

Starting for the Tigers was John Franklin III, and he picked up on the Auburn offense where Sean White left off, sticking the ball in the gut of Kamryn Pettway, who carried the ball five times on the drive for 21 yards, Kerryon Johnson added two rushes for 6 yards including a 3-yard dive to the near pylon for the touchdown. Carlson’s kick was good, giving Auburn a 7-3 lead.

The Commodores’ next drive looked promising but it came to an end on a fourth-down stand by the Tigers. Auburn was unable to move the ball and was forced into a three and out. Both Vandy and Auburn traded fumbles over the next two possessions and the Commodores had the ball as the quarter came to an end.

Vanderbilt started the second quarter with a first-and-10 from the 50. Ralph Webb kick started the offense for Vandy with three straight runs for 25 yards into Auburn territory. Three plays later Webb added a 6-yard rush down to the Auburn 8 to set up a touchdown pass from Shurmer to Jared Pinkney. Openshaw hit the PAT to give Vanderbilt their first lead of the contest, 10-7.

Auburn started their next drive from their own 25, grinding out yards down to the Vandy 28, but the drive bogged down and Auburn settled for a 45-yard field goal off the foot of Carlson to even the score at 10-10 with 8:17 left before the half.

It didn’t take long for Vandy to take the lead back as Shurmer and Webb led the Commodores on a 13-play, 57-yard drive that ended with a 34-yard Openshaw field goal to give Vanderbilt a 13-10 led heading to the halftime break.

Auburn received the football to start the second half and it was Sean White who was under center. Right out of the gate White completed a pass to Ryan Davis for 9 yards to get the Tiger offense rolling. Pettway followed with four straight rushes, two of which were more than 10 yards. White then went back to the air with back-to-back passes to Marcus Davis for 22 yards. Four plays later White finished the drive as he had started it, with a completion, this time to Darius Slayton for a 22-yard touchdown. The Carlson PAT was good and Auburn took a 17-13 lead that they would not lose.

Auburn added a final pair of field goals from Carlson, from 53 and 33 yards out, while the defense held Vandy to just a single field goal in the second half.

Auburn improves to 7-2 as they look forward to next week’s game between the hedges at Georgia.