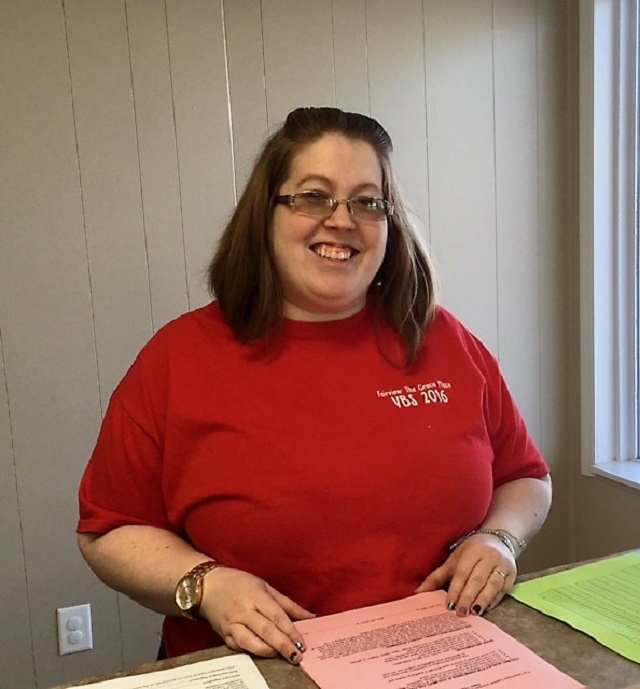 HOLLY POND – A week after the ribbon cutting on their new facility in Holly Pond, the folks at Carpenters Cabinet food bank hit the ground running.  At 10 a.m. on Thursday, Nov. 3, director Laura Symonds opened the doors to the public for the first time.  She found two families already waiting.

By the close of distribution at 2 p.m., Symonds had given out boxes of groceries to five area families.  The size of the package depends on the size of the family: a family of four will receive around 35 pounds of food.  The goal is to give each family enough food for seven days.

Each grocery box contains makings for all three daily meals.  Breakfast supplies may include cereal, oatmeal and grits.  Lunches can include quick-fix foods like mac and cheese and canned pasta dishes.  Suppers can include Hamburger Helper, rice and beans, among others.  Frozen meat is included in the package, along with bread, dessert foods and even healthy snacks for kids.

Carpenters Cabinet of Holly Pond will only receive 300 pounds of food per month from the North Alabama Food Bank, so it relies heavily on donations.  Any of the above-mentioned items and similar foods can be dropped off at the center located behind Jack's at 60 Finley Circle.  Watch for Allstate in Cullman to be starting a canned food drive soon.  Monetary donations can also be mailed to Carpenters Cabinet at P.O. Box 133, Holly Pond, AL 35083.  The organization is a registered nonprofit, and all donations are tax-deductible.

The center has received a recent donation of chairs, but still needs tables.  Symonds also has need of a refrigerator.  She has a freezer, but hopes to add refrigerated items like eggs to available offerings for distribution.  Anyone wishing to help can call Carpenters Cabinet at 256-339-8095.