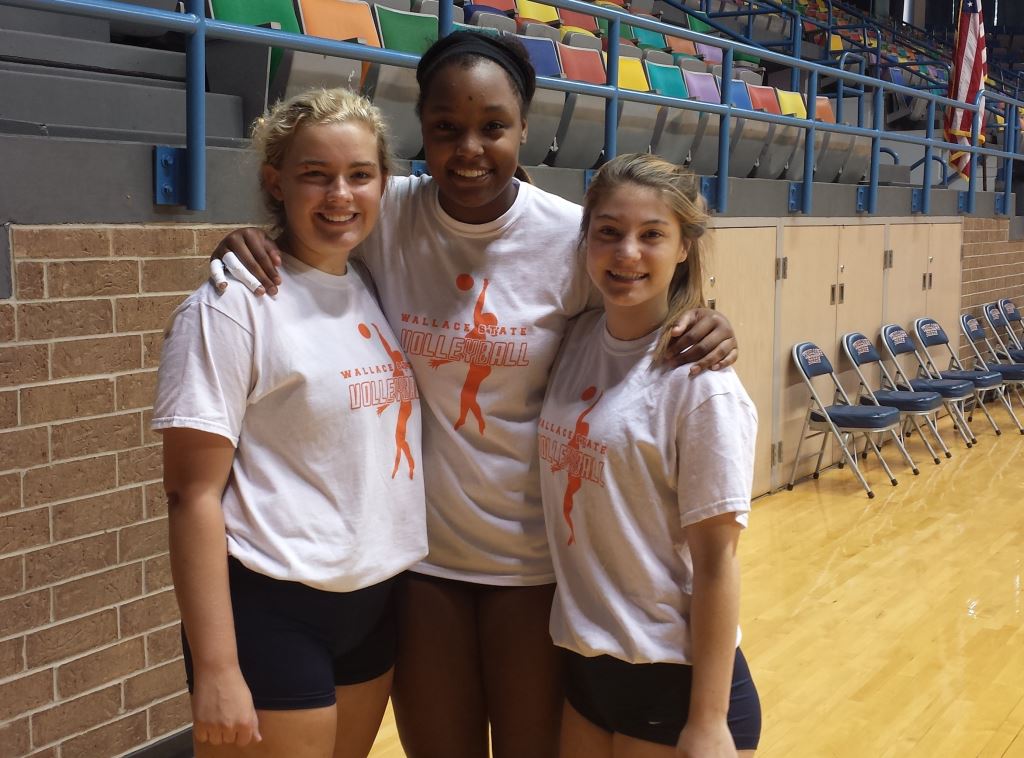 Wallace State volleyball sophomores, from left, Tara Miller, Kelsea Bivins and August Newberry each played at Thompson High School before joining the Lions. Wallace State enters the conference tournament as a No. 1 seed and with a 35-2 record.

HANCEVILLE – In their eighth year as teammates, Wallace State volleyball sophomores Kelsea Bivins, Tara Miller and August Newberry are savoring every minute together during their final season in Hanceville.

The Thompson High School graduates have represented the same schools since their seventh-grade year at Thompson Middle School in Alabaster.

“It’s special for all three of us to be together on the same team. I’m not ready at all for the season to wind down because I love playing with Kelsea and August and all of my teammates. We are a close group and great friends,” said Miller, one of Wallace State’s setters.

Added Bivins, “We know a lot of people can’t say they’ve had the same teammates for eight straight years, especially through middle school, high school and college. It’s something we are proud of.”

It’s unique for a college team to feature two players from the same high school — much less three.

Each sophomore impressed Wallace State coach Randy Daniel at different spurts throughout the recruiting process a couple of years ago. Miller and Newberry actually signed letter of intents on the same day, and Bivins hooked on with the Lions a few months later.

“They each stood out at what they do best. I knew Kelsea was a phenomenal athlete and wanted to have her. I went to a tournament specifically looking for a setter, and Tara fit exactly what I was looking for. August stood out when I was looking to shore up the defense,” Daniel said. “Team chemistry is such a big part of a good volleyball program, and bringing in three players from the same school has definitely been beneficial for our chemistry over the past two seasons. All three are easy to like as well and have been a pleasure to coach.”

Bivins, Miller and Newberry and their Wallace State teammates are three wins away from the program’s eighth consecutive Alabama Community College Conference (ACCC) tournament championship, and they get to host the tournament at Tom Drake Coliseum beginning Friday. The top-seeded Lions enter this year’s tournament with a glowing 35-2 record, losing only a pair of non-conference matches this season.

The tournament championship is scheduled for Sunday at noon. Admission is $7 or $5 for senior citizens. Children ages 5 and under are admitted free. The games will be streamed live at www.jockjive.com.

Wallace State is also seeking its eighth straight trip to the NJCAA Division I national championship set for Nov. 17-19 in Casper, Wyoming.

“We knew what the championship goals were when we signed with Wallace State. We know the winning tradition that Wallace State stands for and want to continue that,” said Miller, who has racked up 183 assists this season.

“We are excited for a chance to win another ring,” said the 5-foot-1 Newberry, who has compiled 205 digs this season after earning a 2nd-team All-ACCC nod last season as a freshman.

With Newberry playing defense, Miller at setter and Bivins as one of Wallace State’s main attackers, the trio jokes that they have all areas of the court covered just among the three.

Bivins is the latest Wallace State player to carve out an NJCAA All-American-worthy season. A year after garnering 2nd-team All-ACCC accolades, the 6-footer closed the regular season with a conference-best 390 kills. She was also first in blocks per set (3.68), second in hitting percentage (.406) and fifth in blocks (78).

Bivins has recorded 10 or more kills in 24 matches this season, including a season-high 21 kills vs. Southern Union on Oct. 2.

“Kelsea was a great player in high school, but I think she’s even better now in college,” Miller said.

Wallace State sophomore MaKenzie Bearden leads the ACCC with a .436 hitting percentage, and she’s second in the league with 282 kills and 125 blocks.

Sophomore Cierra Davis has added 279 digs and 257 kills for the Lions, freshman Abby Borden leads the conference with 900 assists, Emily Wilson is tops with 550 digs and Alicia Charles has a conference-best 128 blocks.

Another tournament championship will give the Thompson High trio a few more weeks to still adorn the same jerseys.

“We have a lot of confidence, and we know it’s us against the gym when we play a conference opponent,” Bivins said. “We know every team is going to play their best against us. It makes it a lot of fun. We’ll be ready.”