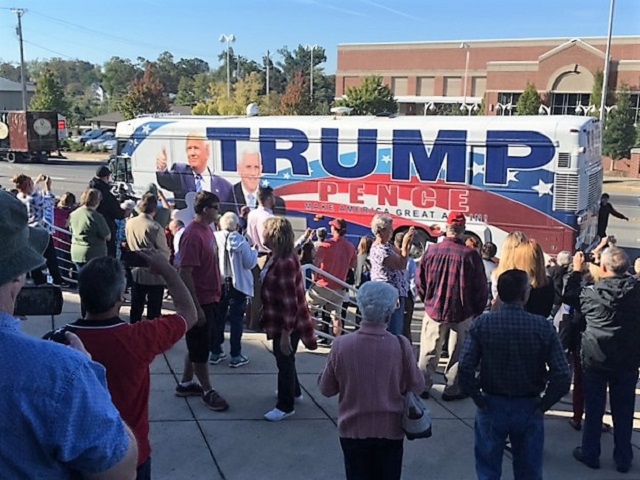 Crowds greet the Trump Victory Bus as it pulls up in front of the Cullman County Courthouse Tuesday morning.

CULLMAN – On Tuesday morning downtown Cullman was a beehive of activity as local supporters prepared for the arrival of the Trump campaign’s Victory Bus.  After early stops at the Madison County GOP headquarters and Frederick's Outdoors in Priceville, the bus arrived in front of the Cullman County Courthouse a little after 9 a.m.

On hand to greet the traveling campaign team was a crowd estimated to be between 250 and 300 people.  The team for today's trip through north and central Alabama included U.S. Rep. Robert Aderholt, R-Alabama; Alabama House Speaker Mac McCutcheon, R-Monrovia; State Supreme Court Justice Tom Parker; Sen. Paul Bussman, R-Cullman and Alabama GOP Chairperson Terry Lathan.  The bus was accompanied for this leg of the trip by a second bus from Frederick's Outdoors.  Outgoing Cullman Mayor Max Towson and other local officials were on hand to lend their support as well.

After the Pledge of Allegiance and an invocation, speakers expressed confidence that Republican candidates would sweep Alabama, but encouraged listeners to call on their friends in other states to rally to the conservative cause.

Reflecting on Trump's recent challenges, Bussman said, "You will never find a perfect candidate."  He echoed the sentiments of many of those in attendance as he continued, "This election is about the Constitution."

Before the bus arrived, many of the conversations among attendees focused on the role of the next president in shaping the United States Supreme Court.  Considering that specific issue, Cullman resident Sylvia Blackerby shared her feelings. "This is a time to stand up, not for ourselves, but for our children. We have to get back to our Constitution."

In his concluding remarks, Bussman offered one last piece of advice to his audience. "The one thing we need to do is pray for our country."

The Trump Victory Bus headed down to Hoover after leaving Cullman, and will finish the day with a stop at the state capitol in Montgomery.  Tomorrow the team will travel to Mobile.