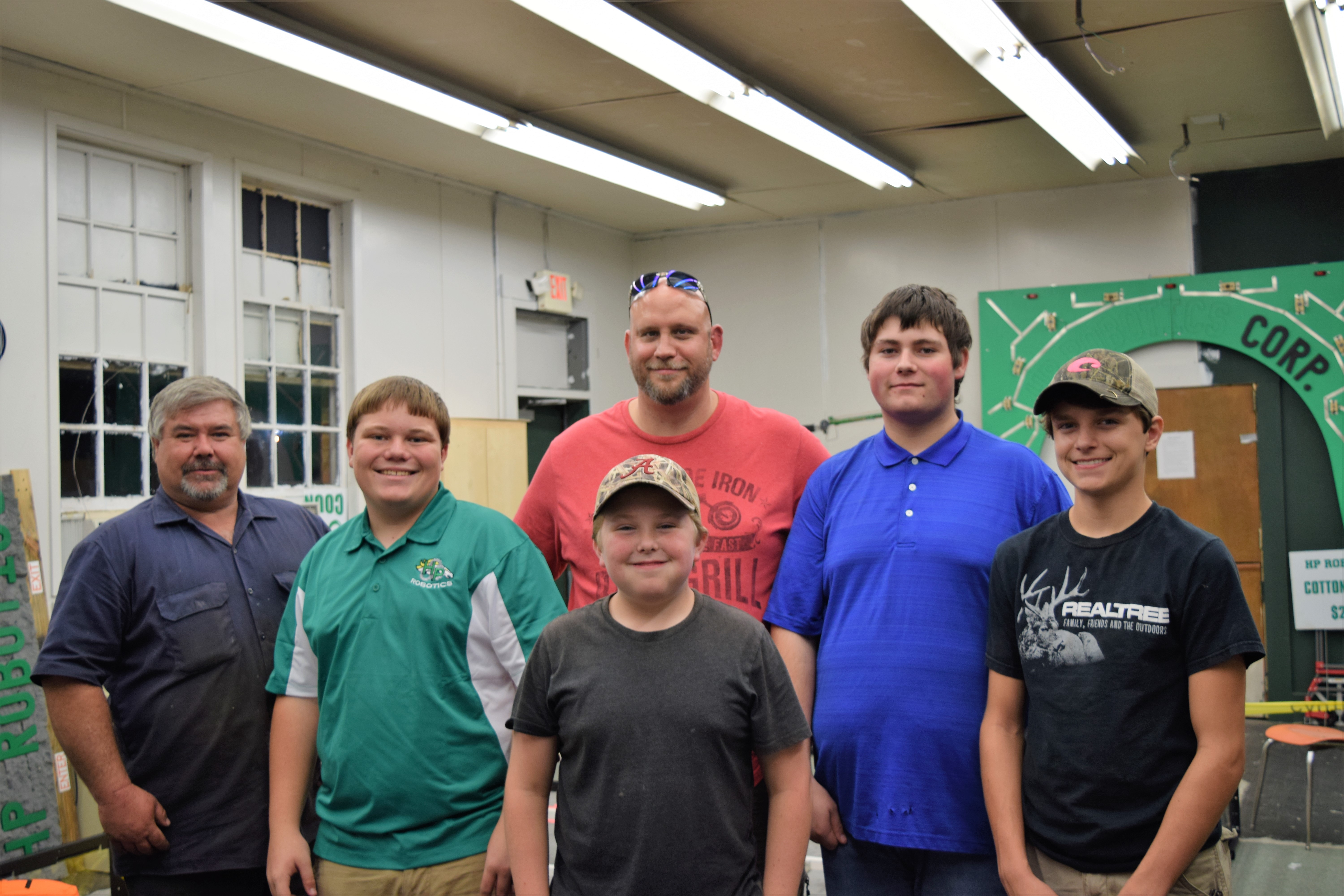 HOLLY POND – The Holly Pond VEX Robotics team is comprised of several talented students and parent volunteers. With a rich history of success and talent, the team is ready to work together to construct robots for specific tasks for various VEX competitions that are scheduled to take place throughout the year.  On Saturday, Oct. 29, one such competition will take place in the team’s own backyard: The Holly Pond VEX Star Struck State Qualifier.

Holly Pond VEX Robotics has two teams this school year, meaning that the school group as a whole will have to build two robots for competitions.  Team One includes Mikal Kitchens, Zachary Ayers and Brett Henderson; Team Two is Dexton Jones, Rylan Griffen and Kelsey Griffen. Both teams have the same task and aid each other when needed.

Howard Cole and Shawn Johnson are the parents who are volunteering their time to mentor the group this year. Cole has been involved for 10 years, after his son went through the program, of the 11-year history of the robotics teams at Holly Pond. Last school year, the team accomplished what may seem unthinkable coming from a small town in Cullman County- they were selected and competed in the VEX Worlds competition in Louisville, Kentucky, along with teams from every state and countries from all over the world.

The world championships, VEX Worlds 2016, held April 20-24, saw competitors from all 50 states and 37 countries with over 16,000 people in attendance. The Holly Pond team ranked 10th in programming skills and 29th in robot skills on the first day of the competition. After day three, the team was ranked 48th in their division and 32nd in programming skills.

The boys finished the world championships ranked 53rd in their division, and although they were not selected for the semifinals, their strong finish is an accomplishment the community is immensely proud of, considering 1,075 teams competed. (The tournament was named by Guinness World Records as the largest robotics competition in the world! See http://qrne.ws/vex.)

Both of this school year's teams have at least one student who went to the Worlds competition last school year for the group as a whole to gain knowledge and to grow their engineering and programing skills. One such student is Dexton Jones. Jones is the lead driver for his team as well as the captain this year and described the Worlds as a “great experience.” He says he is looking into computer engineering and believes that being on the robotics team is a “good lead into that field.”

The Holly Pond VEX Star Struck State Qualifier will take place on Saturday, Oct. 29 from 8 a.m.-4 p.m. at Holly Pond High School. Admission is free, and there will be concessions available.

In years past, Holly Pond had both a VEX Robotics team and a BEST (Boosting Engineering, Science and Technology) Robotics team. The difference between the two, according to Kitchens, is that VEX uses "pre-built metal parts while BEST uses things that can be bought at a hardware store.”

“The controls are the same," said Ayers.

The group shifted this year to VEX only because VEX is year-round.

For more information about VEX Robotics, check out the VEX website at http://www.vexrobotics.com/.

Here’s an article we ran on the Holly Pond Robotics team back on April 29, 2016:

Holly Pond's Robotics team has been in existence at the school for about 10 years, according to Shawn Johnson, volunteer and sponsor. Johnson and the program’s other sponsor and volunteer, Howard Cole, work with the team on a day-to-day basis.

The team has been competing in the BEST (Boosting Engineering, Science and Technology) program since the beginning, but within the last year began competing in a year-round program called VEX, which offers more competition and experience.

The VEX team competed in the state tournament in Jacksonville back in March and just recently the VEX Worlds in Louisville, Kentucky. Johnson had this to say afterward, "We finished our season on a good note with a qualifier win, putting us in 53rd in our division. We were not selected in the semi-finals, but we are very proud of our team for making it this far!! Good job boys!!!"

It was just announced by Guinness World Records that the VEX Worlds broke the record for the largest robot competition after a total of 1,075 teams from 30 different nations participated in the huge robotics tournament. (http://www.guinnessworldrecords.com/news/2016/4/robotics-tournament-vex-worlds-is-named-largest-in-the-world-after-1-075-teams-ta-426576)

Johnson says that the robotics program is great for the school and the students because it exposes kids to a new kind of learning, one that is science and mathematics focused, but in a new way. “The kids have more time to learn and to be taught,” he said.

The Holly Pond Robotics team is funded solely through fundraisers and by the donations of Cole and Johnson. Johnson said he would like to see robotics programs funded throughout the city and school systems as a part of normal school funding.