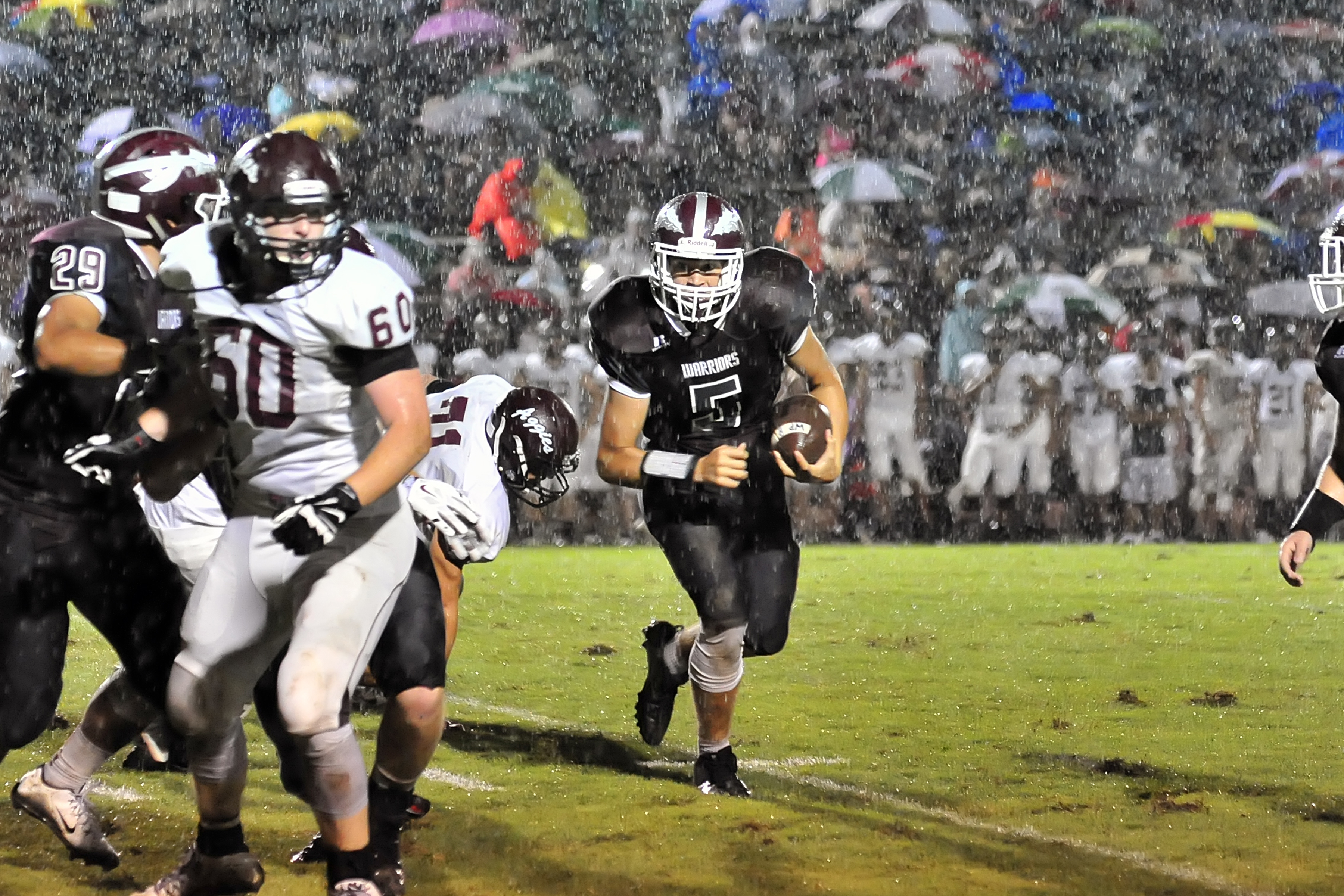 CULLMAN – Legendary ABC sportscaster Jim McCay described the thrill of victory and the agony of defeat during the program "Wide World of Sports," and that cliché was well on display for the start of the local high school football regular season.

The thrill of victory was so sweet for the Hanceville Bulldogs in a 20-8 upset of the Cold Springs Eagles. It was, too, for the Holly Pond Broncos who routed Coosa Christian 49-0, while the Addison Bulldogs played one half and overpowered Elkmont 28-0.

Then add the heartbreaking losses for the West Point Warriors, Fairview Aggies and Cullman Bearcats. West Point gave up the game winner with 1:18 remaining to Hamilton and fell at home 14-10.

Fairview couldn't prevent North Sand Mountain from getting a touchdown and a two-point conversion with under a minute remaining and suffered a 15-14 defeat.

Cullman was unable to get over the hump against rival Hartselle on the road. The Bearcats played close, taking it on the chin by the final margin of 27-17.

The first week of the season was wet and stormy, with games at Cold Springs and West Point being delayed for over an hour and the Addison game getting stopped after halftime with the Bulldogs well in control against Elkmont.

The National Weather Service in Huntsville placed Cullman County under a flash flood warning from 8 – 11:45 p.m. Some areas received approximately 2 inches of rain, with reports of an additional 1-3 inches to come before the evening was over.

Once the weather improved at Cold Springs, Hanceville played inspired football and had plenty of reasons to celebrate the victory with Craig Flanigan a head coach for the first time in his career.

In one month, he took the Bulldogs onto the practice field and then to a game situation with 20 unanswered points after the Eagles grabbed an 8-0 lead in the first quarter.

West Point's Cameron Moore ripped around the left end 90 yards for a touchdown that gave the Warriors the lead in the third quarter against Hamilton, an hour and 20 minutes after lightning sent both teams to the locker room.

However, the Aggies made a defensive stand in the fourth quarter, took over and controlled the clock with a 75-yard drive in 15 plays and 8:08 of time. Victory slipped through the Warriors’ grasp as they played the team from Marion County for the first time in football history.

Fairview got into the end zone in the fourth period to lead 14-7 at North Sand Mountain, then the Bison saved the drama with a TD and decided to go for two. It paid off with the Bison posting a comeback victory, denying the Aggies as they played NSM for the first time.

Down 14-3 to Hartselle in the second quarter, Cullman closed the margin to 14-10, but could not keep the Tigers from adding two more touchdowns to their side of the J.P. Cain Stadium scoreboard. The loss was the ninth straight for Cullman in playing at Hartselle under coach Mark Britton.

This was the first time the Bearcats and Tigers met on opening night since the 1966 season.

The win by the Tigers pushed them in front in the all-time series with 46 to 45 against the Bearcats and four ties.

Holly Pond's confidence and performance climbed tremendously in Gadsden. The Broncos had their way with Coosa Christian by a 25-0 first quarter score and 43-0 when the game reached halftime.

The last two wins for Mike Bates' Broncos have produced 49 points with both games taking place on the road.

Leading 28-0 at the half, the Addison game was called with rain continuing to come heavy and cause a flood warning for the area. Elkmont was playing the Bulldogs for the first time since 1949.

The Bulldogs have won 16 of their last 23 games at A.G. Hicks Stadium after this lopsided game for just two quarters.

Meek went to Bear Creek and came home 44-14 winners. The Tigers led 24-6 at the half and were never challenged by the Bears the entire evening.

Good Hope and Vinemont decided to play jamborees and start the regular schedule next week, facing one another. The Raiders trimmed Susan Moore 19-12 Thursday despite four turnovers, with the Eagles getting past East Lawrence 14-12 Friday at Vinemont.

Players that stood out on opening night include Moore with the 90-yard run, the longest play from scrimmage for West Point and in The Cullman Tribune/CullmanSense coverage area.

Fairview's Sambo Woods returned an interception for a touchdown with QB Ragan Ashley completing 12 of 17 passes for 84 yards and a score to Noah Garrett.

Hanceville running back BJ Smalls produced an 85-yard touchdown while Brenan Hurst and RJ Evans scored in the Bulldogs' upset of Cold Springs.

The Eagles' only TD came on a five-yard run by Cayde Elliott.

Cullman's Ezra Burks caught a TD pass and ran for a score in the Bearcats' loss to Hartselle. Fletcher Jennings accounted for better than 200 yards of offense, rotating the QB position with Ross Crocker.

In Addison's rain-shortened romp of Elkmont, QB Noah Rice scored on a 54-yard run while Zeb Maze ran for two touchdowns and Benjamin Robinson got his first TD of the season.

Now with questions answered for each, the teams will look to make adjustments in the second week of the regular season schedule.

It will begin next Thursday when Vinemont plays at Good Hope.

A busy evening on the final Friday of August will feature Addison traveling to Hanceville in Craig Flanigan's debut at Ray Talley Stadium, the Cullman Bearcats meeting North Jackson at Oliver Woodard Stadium and the Fairview Aggies and East Lawrence playing at West Point Stadium.

West Point will head to Florence that night for a game with the Wilson Warriors. Cold Springs invades Fayette County to battle the Berry Wildcats, with Holly Pond looking to extend its winning streak in an assignment at Brindlee Mountain.

The Meek Tigers will travel to Hubbertville.

All games will be played at 7 p.m.