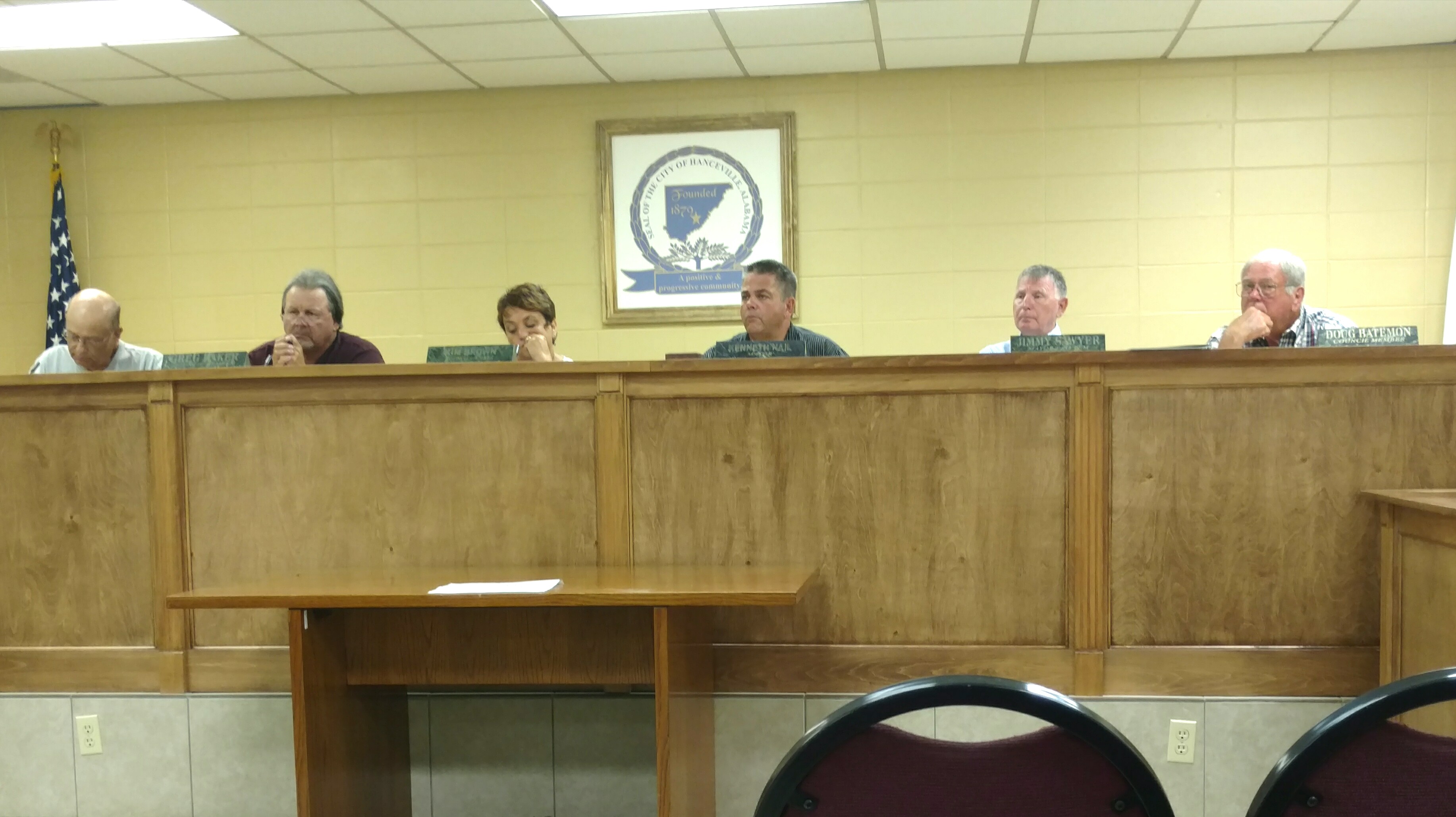 Hanceville City Council, Place 1 candidate Sharon Porter introduced herself during the meeting and provided her resume to stake her claim for her sought position on council. Porter noted the job description for the city council members and stated her passion for the city and its growth.

Also during public comments, resident Tim Collins, moderator for an upcoming political forum sponsored by the Hanceville Civitan Club, stated he had spent the day at local businesses “attempting to get some door prizes” to lure voters to attend the affair scheduled for Monday.

The motion was made and carried to take care of the bills payable. In another line item, the City’s insurance premium bill of $33,398.08 from AFCO Insurance Premium Finance was listed. The council voted to make the payment to AFCO.

The Water and Sewer Board requested $12,000 of budgeted infrastructure funds for an area near East Railroad Avenue and Elm Street for the repair or replacement of three manholes. Agreeing to pay for the project as the bills come in as opposed to issuing a single payment for the request in full, the council approved the request.

A $30,000 offer on 10 air packs and 20 bottles previously replaced by the fire department was accepted.

During his report, Fire Chief Rodger Green noted that July had been “a busy month” with four total fires, two structure, one vehicle and one grass. Additional calls included three false alarms, four car accidents and 61 medical calls. Green also stated that he has tentative plans to begin holding quarterly CPR classes for the community in the future.

Police Chief Bob Long noted that fundraising for last week’s Kids’ Night Out didn’t meet its goal and encouraged donations to still be made. “We did fall a little bit short on our fundraising this year. There is still time for merchants or individuals to call city hall and donate to Kids’ Night Out if they’d like to,” he said.

Councilwoman Kim Brown thanked members of the council and the community for their help in the preparation for the beginning of the school year’s open house and school year.

“I want to thank everyone that came out to help pack the bags. Thank y’all for bringing all of the supplies and Rodger for storing them while our floors were being done. No child went without school supplies to the elementary school and that’s a really big thing. It makes an impression on a child if they don’t have what everybody else has. Thank y’all for the police department coming out the other night. It’s good for our kids to know y’all are the good guys.”

Brown went on to thank Councilman Charles Wilson who helped paint, along with two others, the paw prints on Bulldog Lane the previous Friday.

Also announced was an upcoming Swamp John’s dinner on Tuesday, Aug. 23 at the Moody Center to benefit the scholarship fund.

The Hanceville City Council meets on the second and fourth Thursdays of each month at 7 p.m. with a work session preceding the meeting at 6:30 p.m. The meetings are held at Hanceville City Hall and the public is encouraged to attend. The next meeting will be held on Aug. 25.