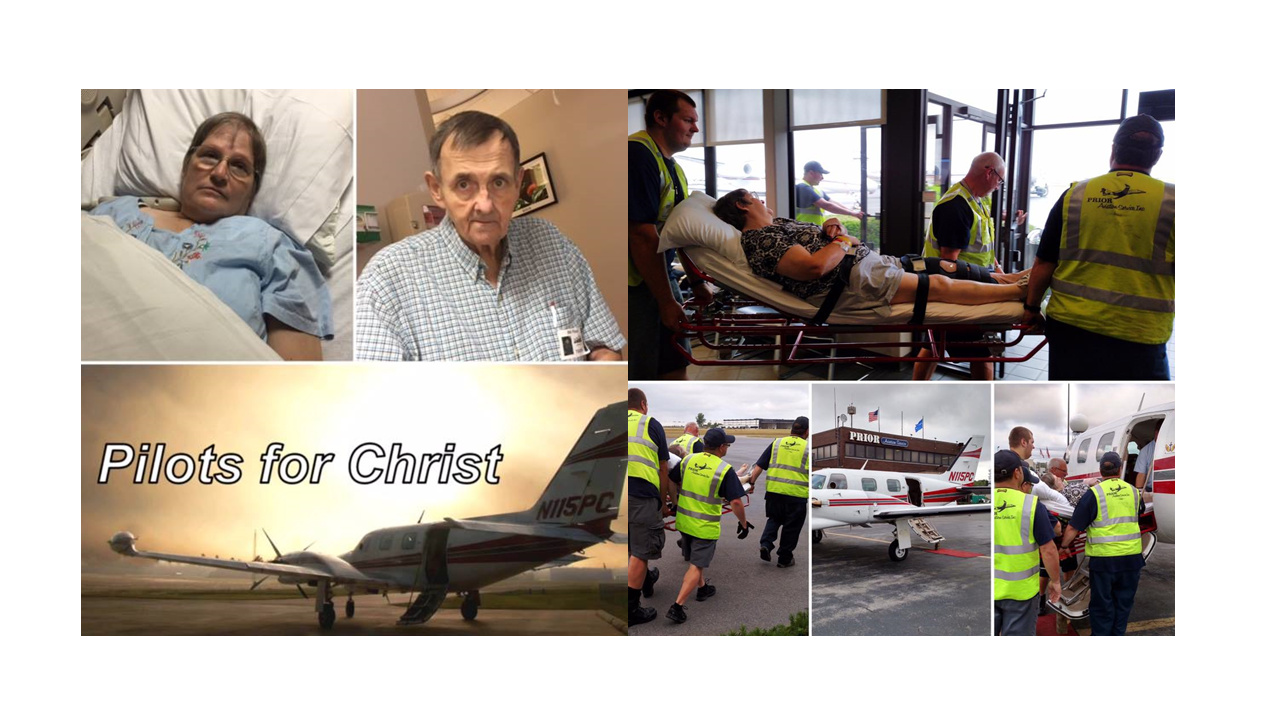 Photo: Pilots for Christ would like to offer our appreciation and a very special thank you to all of the wonderful people at Prior Aviation Services at the Buffalo Niagara International Airport. They helped load Melba Palys onto “Pappa Charlie” for the flight home today to Cullman, Alabama. Melba had an accident in Toronto, falling down a flight of steps. Melba's husband, Bob Palys, is the District Governor of Alabama for Kiwanis.

CULLMAN – Bob and Melba Palys returned home to Cullman this morning on a special flight. Pilots for Christ, a Monroeville, Alabama-based nonprofit organization “which aims to glorify God by promoting the gospel of Jesus Christ through flying missions of mercy for the needy,” flew the couple home from Buffalo Niagara International Airport, bringing to a close a two-and-a-half-week ordeal.

According to Pilots for Christ Media Director Johnny Sales, “Pilots for Christ is privileged to be flying Bob and Melba Palys. Bob is the Alabama District Governor for the Alabama Kiwanis Club. Bob’s wife Melba suffered a terrible fall while (the couple was) attending the National Kiwanis Club Convention in Toronto, leaving her with some very serious injuries and a lot of pain. Bob agreed to share their story.”

Below is Bob Palys’ story, in his own words.

I know that many of you heard what happened to Melba. On Tuesday, June 21, we left our motel in Atlanta at 3:45 a.m. to catch a flight to Buffalo, New York and rent a car for our drive to Toronto, Canada for the Kiwanis ICON. The drive to Toronto was absolutely horrible. Toronto has over twice the population of Atlanta with only a two-lane road. It took us over three hours for the 120-mile drive – the last 30 miles a bumper-to-bumper, stop-and-go headache.

We were in our hotel room for 10 minutes when Melba went to the lobby to buy a couple of Cokes. She never made it. While walking down a spiral staircase the railing ended before the steps did. Melba slipped and fell face first onto a marble floor. Security asked me to come down because Melba had fallen. When I reached Melba it was obvious that her left wrist was broken and she was having problems breathing and her left leg was very painful. An ambulance was called and arrived 90 minutes later. The EMTs carefully put a splint on her wrist and transported her to Mount Sinai Hospital – a mile-and-a-half away.

At the hospital, when the splint was removed, we discovered that her wrist bones broke through her flesh and she was bleeding profusely. X-rays also indicated that she had broken her left knee in two places and surgery was also required for that injury. Emergency surgery was scheduled and the doctors planned to start as soon as the surgery team arrived. It was now 1:30 a.m. Doctors hoped to repair both injuries in one morning. Melba's surgery lasted a little over three hours but only her wrist could be repaired – her knee was too swollen. Melba was in very severe pain and the doctors were giving her a lot of morphine. The surgeon was not too reassuring when he told me, "We did the best we could, but we don't have the fancy gadgets they have in the states."

Melba was finally placed in a room a little after 9:30 a.m. Melba was pretty much knocked out. I returned to the hotel around 10:15 a.m. and found an opportunity to find 90 minutes of sleep.

I called our insurance company and they advised me to get out of Canada as soon as possible. The American Consulate (from the American Embassy) offered help and arranged for an airvac jet to fly us from Toronto to Birmingham, but our doctor in Birmingham would not consent to our flight because of the grave danger of blood clots. On Thursday, the doctor in Toronto planned to operate on Melba's knee, but we refused. The American Consulate arranged for a private ambulance to drive us to a hospital in Buffalo, New York.

Now Chapter Two begins. When we got to the Buffalo hospital they refused to accept Melba and told us we had to return to Toronto. My sister had worked at this hospital for 40 years; she had two knee replacements there, and she died in the hospital six weeks earlier. Needless to say, we were very upset. I explained that we were U.S. citizens and the hospital could not refuse medical care.

Reluctantly, a surgeon came to the ER and told Melba she did not need surgery and we should return to Alabama. Four doctors in Toronto told Melba that surgery had to be performed. The doctor admitted he had not looked at the CAT scan he had ordered and we demanded that he review the scan. He came back and agreed that Melba needed surgery, but he really didn't want to do it because our insurance "wasn't any good." He finally agreed that he would do the surgery, but not for 7-10 days because Melba's knee had a small cut. Melba spent 10 hours in the ER when they agreed to let her stay overnight for observation.

The surgeon still recommended that we return to Alabama to have surgery. Melba could not walk or sit – she will not be able to walk for at least three months. The risk of blood clots – even with driving – was still a highly dangerous 80 percent.

On Friday we spoke to the patient supervisor and she convinced us to transfer to a different hospital that specialized in trauma injuries. We were now at a hospital that wanted us with an absolutely tremendous surgeon. Melba had knee surgery last Saturday; they put in two plates and approximately 20 screws. Once again Melba was in a lot of pain.

On Thursday, June 30 Melba began physical therapy – three one-hour sessions daily. Yesterday, Melba was able to hop 12 steps using a specially designed walker for her left wrist and left leg. She was also able to stand on one leg for almost three minutes. She is working very hard and each session saps her energy. We really have no idea when we will be allowed to return – we are hoping as soon as possible when Melba can tolerate the two flights and drive from Atlanta.

Melba was very upset and blamed herself for our trip. Of course, this type of thing can happen anywhere at any time. I hope that Alabama Kiwanis and Kiwanis International understands that Melba always comes first. We will not be able to attend the ICON in Atlanta. You can help us with your prayers. We have no doubt that "This, too, shall pass." I look forward to seeing you all soon.

I must really brag how kind, friendly and helpful the Canadians were. They were willing to do whatever was necessary to help us. We did not encounter any mean person until the two we saw at the first hospital in Buffalo. In Buffalo I am fortunate to have people volunteering to drive me to and from the hospital every day and offer whatever we need.

Canada has socialized medicine. Canadian citizens, basically, receive free medical care. They may have to wait a year or year-and-a-half to receive a CAT Scan, MRI or surgery, but it is free. Since I am not a Canadian citizen, I had to pay for all medical services prior to the service. The Canadian ER, EMTs and hospital would not accept checks or credit card – cash only. The surgeon did accept a check and the private ambulance service accepted a credit card. Our two-day hospital stay amounted to $15,000. Thank heaven that Peoples Bank agreed to wire the hospital the necessary money.

Unfortunately, I must report that the Canadian medical system is decades behind the United States in facilities, equipment and procedures. I can't fault them because they are trying to do what they think is best. If you ever hear the two words "socialized medicine," plead no way and pray.

So how, exactly, did Pilots for Christ get involved?

“Paul England, who is president of Trustmark Bank in Monroeville and a Kiwanian, sent me an email telling about Bob and Melba Palys' predicament,” said Sales. “Our chief pilot and president was going to the FAA 100-hour maintenance in Pennsylvania when we received the email. We reconfigured the plane with our stretcher and Tommy took off.”

The Pilots for Christ crew was able to safely deliver Bob and Melba Palys home this morning, where they landed at Cullman Regional Airport-Folsom Field just a few hours ago.

To learn more about Pilots for Christ, visit http://pilotsforchrist.net/.